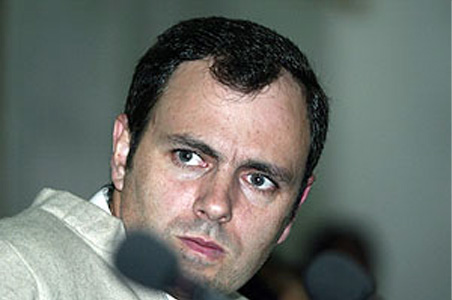 Srinagar: Irked by the hooting of spectators during a football match, Chief Minister, Omar Abdullah today kicked the table in anger before leaving in a visibly upset mood here in North Kashmir town, Bandipora.

Eyewitnesses said that Omar Abdullah had to face embarrassment when hundreds of spectators hooted which he took on himself.

“As the chief Minister was called on the dice to deliver his address, spectators gathered near his podium and demanded punishment to the killers”, said Aijaz Ahmed Bhat ,a local resident of the Bandipora town.

“Chief Minister kicked the table and even had a heated argument with his own legislature and other dignitaries”, Bhat added.

Last month Bandipora had witnessed an alleged killing of a youth by army in an encounter. Army had dubbed him as a militant but J&K government ordered an enquiry after Bandipora remained shut for days including stone pelting in many areas.

However a local legislature told a local news outlet that people were hooting at the soccer match in sheer excitement.

“It was just a normal football batch where people were excited for their respective teams. But the CM thought that they were hooting at him and left the venue in anger”, Bhat told to a local news outlet.

Officials in Jammu and Kashmir youth and sports department, on condition of anonymity, said that stadium was scheduled to be inaugurated last month, but function was put on hold following the protests and shutdown in wake of alleged killing by the army.