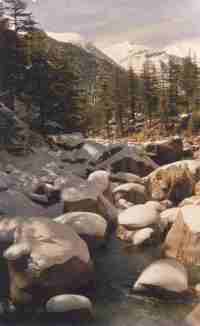 Shimla: Sensitive to the need for conserving and expanding Himalayan green cover, foresters are making efforts to link livelihoods with management of forests by introducing new practices.

Under ‘Sanjha Van-Sanjivani Van’, one of the programs started recently, as many as 525 joint forest management committees (JFMCS) have been constituted, said an government spokesman.

These committees, under the community driven program, is planting about one crore herbal plants on 2,500 hectares, which would enable people drive economic benefits when they are able to harvest the herbal crops.

More than 15 lakh herbal plants to more than 12 lakh rural and urban families were given for planting in 2008. On maturity, 75 percent of the income generated from herbal crops would to the joint management committee and the rest to panchayats, he said.

Of the 165 herbal species exploited for commercial purposes, the state is largest supplier of Chilgoza, Kuth, Dioscoria, Dhoop, Picrorrhiza, Valeriana and Ephedera in the country.

For marketing the herbs the State Medicinal Plant Board has already signed a Memorandum of Understanding with Patanjali Yog Peeth, Haridwar.

In another scheme, ‘Apna Van-Apna Dhan’ people are encouraged to grow trees on private and barren land for which 4 lakh plant saplings are being distributed free of cost, said the spokesman.

A special â€˜Pipal-Bargadâ€™ plantation drive in identified villages is also a part of an awareness drive to educate the residents about the economic value of these trees. By associated village communities, especially the elders, as many as 8,536 Pipal and Bargad trees in 3057 identified villages were planted in 2009.

For conserving and developing water resource in forest areas, a â€˜Van Sarovarâ€™ program under NREGA has been initiated whereby 200 water harvesting structure are being constructed. These forest ponds besides providing water for wild life would also prove helpful in containing forest fires, he said.

To contain illegal felling and smuggling felling of trees, ‘Van Thanas’ have been constituted, six have become operational and another 10 are proposed to be setup soon.

Of the stateâ€™s total geographical area of 55,673 Sq Km, 37,033 sq Km is classified as forests which holds an estimated timber wealth of over Rs 1.5 lakh crores, said the spokesman.