Shimla: Unruly and defiant scenes were witnessed at congress Bhavan as the councilors affiliated to the party failed to arrive at a consensus over their candidate choice for mayor and deputy mayor election that was to be held today but could not take place because quorum for its conduct fell short at the town hall. 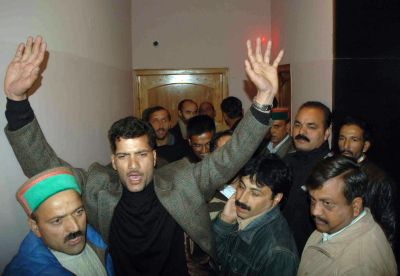 Divided down the middle into Virbhadra and Stokes camps, the fifteen 15 congress councilors presented themselves before party president Kaul Singh in the congress office and put forth names of Madhu Sood and Seema Chauhan for the mayors position and Harish Janartha and Sudhir Azad for the deputy mayors position.

Kaul Singh sought to conduct the election is democratic manner and asked the councilors to exercise their choice by signing against a name of their choice. After the exercise, he declared Seema Chauhan and Sudhir Azad as the partyâ€™s candidate for the election.

A jolted Virbhadra camp was furious and charged Kaul Singh and Vidya Stokes, leader of the congress legislator party who was also present while conducting the internal election, of foul play and started shouting slogans against them.

Later before media, Kaul Singh announced Madhu Sood and Sudhir Azad as the partyâ€™s candidates for the election that was to ensue later in the day.

As the choice failed to move the councilors, none went onto hold the elections and the presiding officer announced its postponement for Saturday due lack of quorum.

Party president Kaul Singh has asked the defiant councilors to fall in line otherwise action would be initiated against them that could lead to them being expelled from the party.

In a house of 25 councilors, 15 are affiliated to congress, 8 to BJP and 2 have CPI(M) leanings. Given the discontent among the congressmen, BJP is sensing an opportunity and despite the shortfall in numbers have fielding Manjeet Sood for the mayors post.

The mayorâ€™s position falls vacant as the outgoing first citizen Narinder Kataria completes two and a half years in office and the other half of the five year term by rotation goes to a general category woman candidate on a reservation norm for heading the municipality.