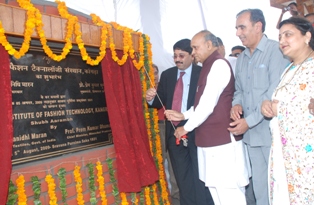 The Kangra CATS centre would the first of its kind in the country to offer doctorate level studiesÂ Â  in the field of fashion design, fashion communication, accessory design, textile design and fashion technology,â€ said Maran.

Around Rs 20 crore would be spent for setting up infrastructure and other related facilities for CATS, which would be started in coming years,â€ he added.

The Kangra NIFT has been set up on 18 acres area with a total cost of aroundÂ Rs 60 crores. For the first batch 150 students in 5 courses have been admitted for the current academic session, he said.

A director and senior faculty to run the institute have been deployed, more academic staff would be sent from other centres and experienced fresh faculty from the industry has been recruited which would join the institute soon.

Around Rs 40 crore would be spent on construction of buildings and other infrastructure and the entire construction would be completed in two yearsâ€™s time.

An amount of Rs 13 crore would be spent for setting up latest machinery. Two hostels, one each for boys and girls have been set up to accommodate the students. Residential accommodation for faculty had been arranged.

A total of 1950 students had beenÂ admitted in all 13 NIFT centres during the current academic year and the centre was actively examining setting up of new NIFT centres in Coimbatore, Punjab, Rajasthan, J&K, Jharkhand and Chhatisgarh in the coming years .

The minister disclosed that NIFT had agreements with 29 leading foreign fashion institutes of the world under which students and faculty visit various countries to study fresh fashion trends at the International level.

They also invite students and faculty from other countries to study current fashion trends in various parts of the country to popularise them at the global level so as to find more markets for IndianÂ  fashion products, he said .

NIFT is the first fashion institute in the country to award its own degrees in fashion education as the institute has been conferred statutory status by an Act of parliament with effect from 1st april, 2007 that empowers it to award degrees to its students. Annual convocation of NIFT would be held in November 2009 when degrees to students would be awarded.

The minister said that NIFT was considering a proposal to publish fashion text books and reputed publishing houses had shown keen interest, as there were no standard prescribed text books in the field of fashion.

Chief minister Prem Kumar Dhumal, who was chief guest on the occasion asked NIFT authorities to explore and promote local talents in Art and Craft so that the institute could become a breeding ground for locating budding talent.

He said that the NIFT centre at Kangra was going to be the first green campus in the country.

Himachal was poised to emerge as an educational hub, said Dhumal as the number of universities was likely to go up to 15 during the next few years.

Four universities had been set up in private sector while the fifth one was coming up near Palampur.

He said that 643 hectare of land had been earmarked in Dehra for the opening of Central University, first batch of IIT, Mandi had started functioning at Roorki and the classes will be shifted to Mandi next year.