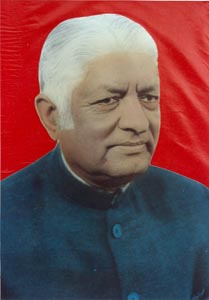 The people of Himachal Pradesh celebrate 103rd birth anniversary of a true son of the soil, on August 4 this year, whose eventful political and public life shows how an individual became an institution and how a little lamp of a determined person’s dream transformed into a lighthouse guiding the masses to a goal.

Such an illustrious son was Dr. Yashwant Singh Parmar, the popularly called architect of Himachal Pradesh and also the first Chief Minister of the State.

A selfless, inspiring and tireless crusader, Dr. Parmar had created a soft corner in the hearts of hill people not within Himachal Pradesh but throughout India. His contributions in formation of the State and later attaining proper shape and status to it are supreme for which he will be remembered for years to come.

Dr. Y.S. Parmar achieved extraordinary distinction as a parliamentarian, administrator and statesman of a rare quality. He was a man of simple habits, without trace of ostentation, remarkable integrity and with a lust for the service of the people.

After a brilliant academic and a brief but distinguished judicial career, which he gave up for the cause of the people of the State in 1941, Dr. Parmar led the Hill State Peoples’ Conference and organized a Satyagraha Movement in Suket State which ultimately led for the formation of Himachal Pradesh in 1948.

The consolidation of all the Himachalis and the attainment of Statehood for Himachal Pradesh involved a long and arduous process but due to the wise leadership of Dr. Parmar the goal was attained in a peaceful and constitutional way.

There was a big lobby in Punjab favoring the merger of Himachal Pradesh with that State. It was a period of trial.

The Government of India after a great deal of persuasion by Dr. Parmar and his colleagues agreed to keep Himachal Pradesh’s separate entity. But this meant negation of democratic Government in the Pradesh.

Dr. Parmar who was Chief Minister at that time said, “No sacrifice is too great to save Himachal Pradesh.” He stepped down and Lieutenant Governor took over as an Administrator of the State. Himachal from a part ‘C’ State was made a Union Territory.

His dream was to see the hill men gain a personality of their own. His vision was clear and the arduous task to realize this vision continued till the attainment of Statehood in 1971. It was Dr.Parmar’s forceful advocacy, which led to the achievement of statehood to Himachal Pradesh.

By his sincerity and effective advocacy, the hill State gained considerably in population and area by merger of hill areas of Kangra, Shimla, Kullu and Lahaul-Spiti in November, 1966 at the time of Re-organization of Punjab.

The people of both the new and old areas jubilantly sang the praise of their leader at the obliteration of artificial barriers, which had separated them from the neighboring people having cultural, social and linguistic affinity.

Dr. Parmar was the first person who took pride in calling himself a ‘Pahari’ and it is only after him that the Himachalis shook off all inhibitions and held their heads high with a sense of belonging to the soil.

He was a great enthusiast of the Pahari culture. He used to wear the Pahari dress, he liked Pahari dishes and propagated Pahari architecture.

Dr. Y.S. Parmar’s contributions to the development of the State, especially in the fields of road construction, horticulture and agriculture had been most significant.

It is become of his farsightedness and able leadership at the adolescence stage, that Himachal had become an ideal for hill areas development in the country. Dr. Parmar raised his voice against applying All India yard-sticks to the hill areas in the matter of development and planning.

This thought provoking new strategy for the hills areas development and strong plea for specific planning for the hills made for him unique place in the hearts of every son and daughters of the hills. Dr. Parmar remained Chief Minister of this State till 1977.

In all he remained Chief Minister of the State for over 17 years and served people from the core of his heart. His dream was to make Himachal Pradesh a prosperous and self-reliant and always strived for the dignity of people of the St

For his long service to the cause of Himachal Pradesh and for its creation, progress and constitutional development, Dr. Parmar would always be remembered as Himachal’s Nirmata and will also remain a source of inspiration for generations to come.