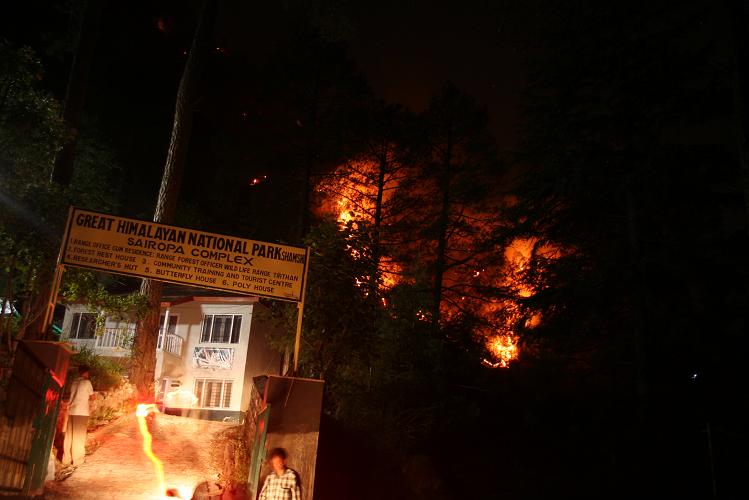 Sai Ropa, Banjar:Â  After four days of the jungle fire behind in the forests of the Tirthan valley the fire finally endangered the Sai Ropa complex. The fire fighting began at 10:30 pm and continued till 2 am till it was finally put out. The fire was so alarming that the DFO , GHNP had to call for the Fire Department and soon a fire brigade started from Kullu. Alarmed by the fast rate of the spread, Ankit and Aditya Sood from Sunshine Himalayan Adventures gathered an army of volunteers consisting of members of BTCA â€“ Cooks , porters and guides, volunteer from Tata Wildlife Institute Mumabi Mr. Mayuresh who is volunteering with the park, birdwatchers from Bharatpur and bravely attacked the fire. Soon they were joined by the members of wildlife department at SaiRopa led by Mr. Nirlep Singh BO and Mr. Tilak guard along with the brave daily wagers.

With the help of SDM , Banjar Mr. Yash Paul who was closely monitoring the fire , the electricity was cut down. The fire brigade was kept on hold till the morning. 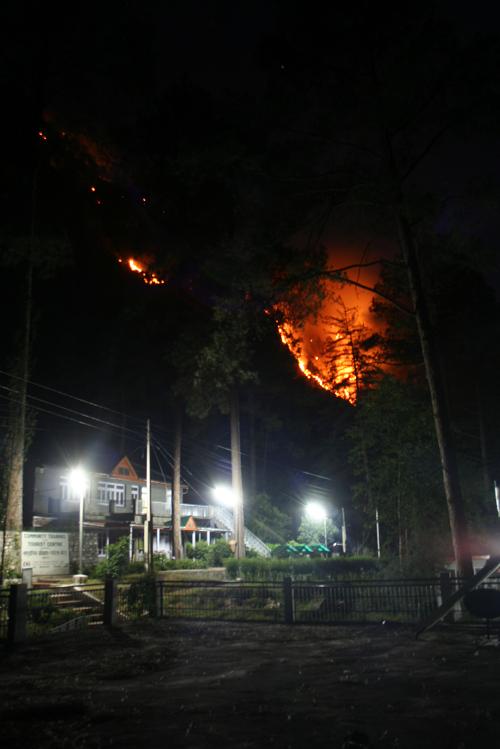 Strangely enough the incidents of fire have suddenly gone high since the forest has declared ” The Aag Bhujao and Inaam Pao Yojna”. There is an immense need to educate the local people about forest fires. Moreover Biroja extract from the Pine trees given on lease by the Forest Corporation adds to these fires setting the trees on permanent disaster. BTCA ‘s kalajatha ( steet theatre) has prepared plays to educate the people for forest fires but is waiting for funding from Appropriate agencies.