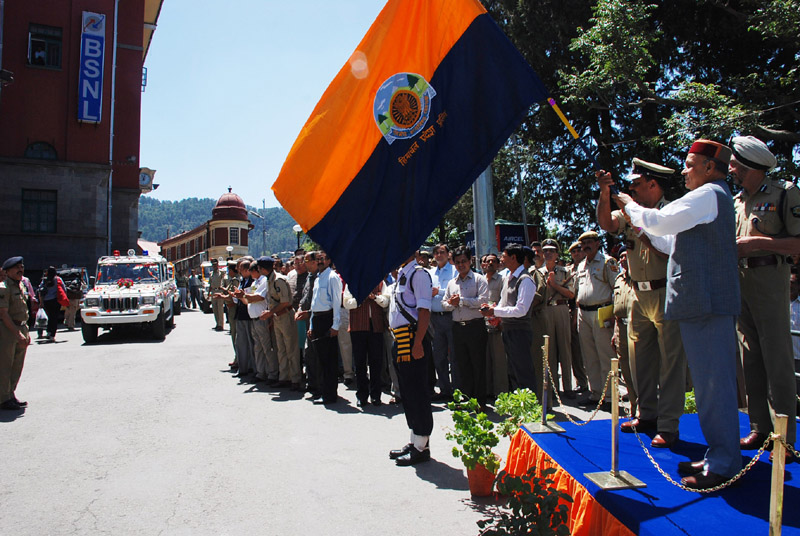 Shimla: Frequent mobility would be ensured with every police station and police post getting equipped with minimum one vehicle under police modernisation programme under implementation in the State in a phased manner and Rs. 46.26 crore to be spent during current financial year. This was revealed by Prof. Prem Kumar Dhumal, Chief Minister, after he flagged off fully equipped 30 mahindra bolero vehicles to different police destinations all over the State under the Police Modernisation Scheme from Central Telegraph Office, here today.

Chief Minister said that uniformity in the police assistance vans would be carried and multipurpose mahindra bolero vehicles equipped with communication system, investigation, first aid kit, breath analyser and speed guns to check drunken and rash driving etc. facilities made available to every police station in a phased manner. He said that vehicles had been found suitable for the users which weighed factors like response time, usefulness, pressure carrying capacity and the equipment which could be loaded in the vehicle. He said that Rs. 3.32 crore had been spent on the purchase of vehicles and efforts were afoot to strengthen the fleet in the police department. He said that the State had 113 police stations and 115 police posts covering every part of the state to attend to the law and order duties. He said that the new vehicle would also serve as ambulance in emergencies. He said that every police post had been provided motor cycle for prompt mobility and old vehicles were being replaced in a phased manner.

Prof. Prem Kumar Dhumal said that Rs. 20.25 crore had been received from the Centre for modernization of police organization in the State on the request of State Government. He said that the State had contributed Rs. 53 crore towards police modernisation against state share of Rs. 12 crore. He said that modernisation exercise had benefitted the state police in building up its capacity in motor vehicles, training, security, forensic science, communication and traffic control equipments. He hoped that with the better working conditions and facilities the state police would be in a position to protect life and property of every citizen.