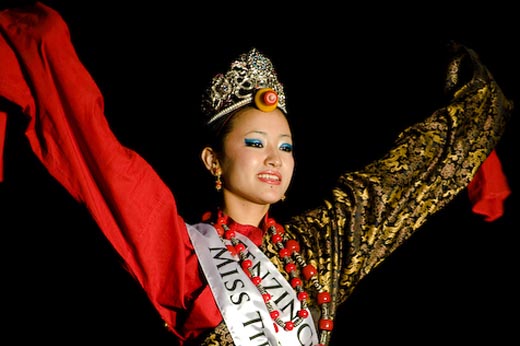 Ngawang Choying, was adjudged the first runner-up, receiving rupees 50,000. Dolkar was awarded the third prize with an amount of rupees 25,000, while Yeshi lhamo, the final contestant received a consolatry award of rupees 5,000.

The chief guests present were Dr BK Modi and Mr Bhishm Agnihotri, former ambassador of the NRIs to the United States of America.

There were total four rounds to judge Miss Tibet.

The first round began with the introduction of each contestant.

Second round was the gown round. Dressed in various beautiful gowns, the contestants walked the ramp with an aura of beauty and elegance. Three of the gowns were designed by Ms Kelsang Tsomo of Lakar Designs.

The third round was traditional costume round where each contestant, dressed in various costumes of different regions of Tibet walked the ramp.

During the final round of the pageant, the four judges asked one question each to the contestants.

The winner of Spice India Splendour Miss Tibet 2009 pageant, Tenzin Choezom was asked: “What is your message to the Tibetan youth in exile?”

“Education, I believe is the most essential thing for a Tibetan youth in exile. It is the only tool and the only weapon that would carry us through this period of struggle and ultimately help the cause of Tibet,” answered Tenzin Choezom.

Performances by traditional Tibetan musicians, kathak dancers and a body building show by a professional body builder were other line-up of the show.

The pageant director said the next Miss Tibet Pageant will be held from 4 to 6 June 2010.