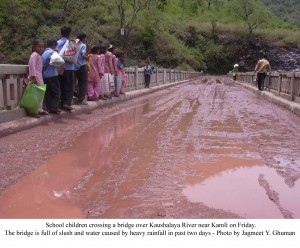 KUMARHATTI: The heavy rainfall has brought agony for residents of Kamli and Khareen villages near Parwanoo, about 25-kms from here. The residents of at least half dozen villages falling under Banasar panchayat have too suffered badly due to land slides at many places on Parwanoo- Bhojnagar road.

The debris have slid downhill and has blocked the road at many points between Kamli and Khareen. The vehicular traffic movement on road is badly affected.

The condition of 2-km stretch of road beyond Kamli has gone from bad to worse. The bitumen was nowhere to be seen as a thick layer of malwa has covered the road surface. At some points, the two feet high debris have accumulated on the road. Though the two wheelers were somehow managing to ply on road the things were hard for four wheelers and trucks to cross thorough the road.

The slush has prevailed at many points thus making it tough even for pedestrians. A bridge over the Kaushalya River linking Kamli with Khareen was under slush cover thanks to the lack of proper drainage along road. Moreover, choking of seasonal nullahs due to the indiscriminate construction has further added to problem. The rainwater rather to gush thorough the natural course was flowing over the road. As a result the huge quantity of slush has gathered on bridge.

To cross bridge one has to put his or her safety on risk as there was no other choice than to walk slowly on narrow pavement alongside the bridge. The short term repair measures adopted by PWD seemed to be insufficient as road was in need of thoroughly re-carpeting.

In fact the funds have been sanctioned under Pradhan Mantri Sadak Yonjana to metal the entire portion of Parwanoo- Bhojnagar road long time back. The work was going on at very slow speed, alleged residents.