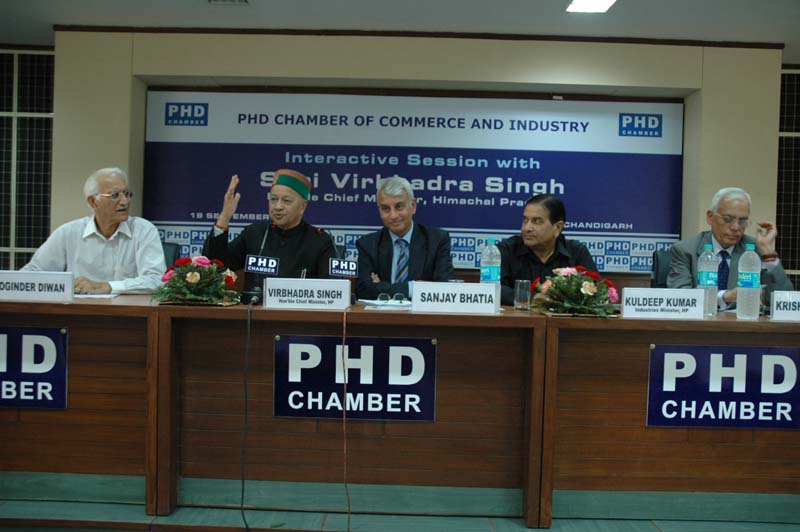 Chandigarh: Virbhadra Singh, Chief Minister said that the labour in the Industrial Sector would be required to be engaged through employment exchanges of the State and paid minimum wages as per the law of the State.

Himachal Chief Minister did an interview session with the Managing Committee and other Senior Industrialists of PHD Chamber of Commerce today.

He said that State Government has relaxed the working hours of the workers working in all export-oriented factories by granting exemption under Section-65 of the Factory Act, 1948.
After this amendment, workers can be engaged on overtime upto 75 hours in a quarter, he added.

He informed that the State Government has also permitted women workers to work in two shifts instead of one shift in all the factories from 5.00 AM to 10.00 PM by granting exemption under Section-66 of the Factory Act, 1948.

Also State Govt has permitted women workers to work in all the three shifts in the Establishments of Business Process Outsourcing and Software & IT related services under H.P. Shops and Commercial Establishments Act, 1969.

He informed that State Government was also seized of the problems of labour housing and has taken steps to mitigate housing problems for the workers at major industrial locations. Himachal Pradesh Housing & Urban Development Authority (HIMUDA) has been designated as Nodal Agency for the development of Housing Infrastructure, he added.

H.P Apartment Act, 2005 has been enacted to boost private sector Participation in housing Sector in the State. HIMUDA has already given licenses to 20 private builders for the construction of 6500 dwelling units with an estimated cost of about Rs. 600 crore.

Besides, HIMUDA is also constructing 928 one room flats for the workers in Parwanoo, Baddi and Nalagarh. HIMUDA has also acquired additional 890 bighas of land at Mandhala near Baddi for the development of a housing colony and work on this project has already started wherein 675 plots would be carved out, besides constructing approximately 2000 one room to four room flats, he added.

Chief Minister said that in the field of Information Technology, Himachal is an ideal IT destination, NASSCOM has rated this State high on 9 out of 13 parameters based on locatiional advantages. The State Government is in the process of implementing a project called Himachal State Wide Area Network (HIMSWAN) with financial assistance of Rs.95 crore from Government of India to connect H.P. Secretariat with all Districts, Tehsils and Sub-Tehsils and Panchayat Headquarters which would be completed by 31st March, 2008.

He said that Government had also enacted Himachal Pradesh Private Universities (Establishment and Regulation) Act, 2006 in the State. This Act will promote and regulate setting up of Institutes of Excellence in the State which would also be a step in our endeavours to make Himachal a “Knowledge State”.