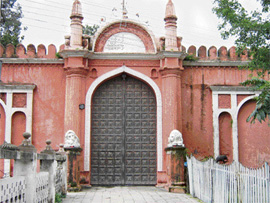 Even big contribution of this historic town in the freedom movement did not brought light of development for its people after independence.

NAHAN: Surrounded with lush green forests of Shivalik hills the 400 years old Nahan town of Himachal Pradesh is situated on a beautiful hillock. Although the town had been Kingdom of Sirmour Riyasat and now district head quarter of Sirmour district, having a large number of temples, structures, palaces and several other things of highly historical importance but it had failed to get heritage status so far.

Residents have aired their voice at many occasions against the governmentâ€™s apathy and sheer negligence and alleged that all major problems of the town were hanging fire since independence. Brave freedom fighters of Sirmour Riyasat made this town center of activities of Prajamandal movement . This town witnessed every color of freedom movement. Freedom fighters challanged King in his home town, without any fear of his military which had crushed many such movements in the past.

The movement got a boost after the announcement of Prajamandal movementists to get freedom from the cruel rule of Riyasati rulers who were just working as official agents of English empire. The sons of Nahan faced wreath of English and Riyasati rulers, gave their every thing to the mother land but after independence this town got only sheer political negligence in place of development so had been the treatment with the Sirmour district which had been put in the list of 200 most backward districts in the country by the govt of India.

Famous for its all weather pleasant weather Nahan town was founded by the ruler of Sirmour Riyasat Raja Karam Prakash in 1621 A.D. A Vaishnav saint Baba Banwari Dass who was meditating on the top of this hill, in the dense forest of Cheer at the height of 960 meters from sea level advised King to establish his kingdom on this hillock. For the construction of Kingâ€™s Palace saint vacated his Taposthali Ashram and entered in a cave where he meditated for the rest of his life, as per historians. The cave is situated inside the Shri Jaggan Nath temple in the town.

Agreeing with NGOâ€™s and social workers of this four century old town, President of Nahan Nagrik Sabha and Mr. Digvijay Gupta expressed his deep concern over â€˜pushing all the major development proposals of the town in dark cornerâ€™ and alleged that during past 60 years people in power did nothing for the town. He alleged that major problems faced by the residents were hanging fire since independence including construction of a by pass to divert the long route traffic.

He charged that only public statements were made to lay sewerage system in the town but there was nothing on the ground, while even tehsil level towns in the state had got sewerage system after independence. He said that soon after independence residents had demanded to make Nahan an educational hub by opening medical colleges and universities here keeping in view its environment and pleasant weather but contrary to this political leaders closed popular institutes like Art College and Evening Colleges of this town.

A veteran Congress leader who Chaired Nahan Municipal Committee for two terms as Chairman and one term as Vice Chairman Mr. Babu Ram Bansal also feels that historic town had been victim of political negligence â€˜those who represented Nahan constituency never kept development of this town in their priority, they did vote politics,â€™ he alleged. He said that it was shame for the state that 140 years old Nahan Municipal Committee, which was second oldest Municipal Committee in the country and oldest in Northern India was facing deep financial crises for the past 25 years and did not have money even to pay salaries.

Describing in painful voice Mr Bansal described that even after several assurances no industry was established between Nahan and Banethi and Jamta. Revival of Nahan foundry, the oldest foundry of Northern India, did not materialize even after 35 years, this issue was tossed as main election plank since 1977, he added. Only government college of Nahan has failed to get its own complex for the past over 30 years. Despite best efforts by the IPH department, residents were crying for drinking water, the town was getting only one time supply and that too irregular and insufficient. Nahan town was facing regular monthly power cuts and irregular supply which was brought in the notice of Chief Minister also by the residents. He demanded that Chief Minister Mr. Vir Bhadra Singh himself should take account of problems faced by the residents of Nahan town for the past several decades and order effective solutions.