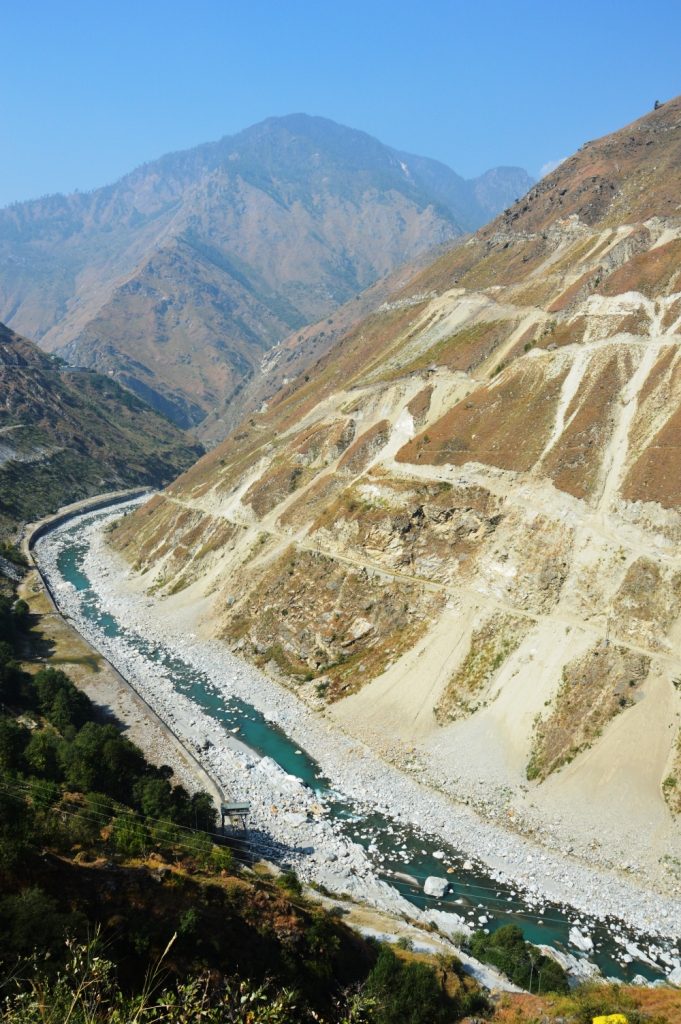 Pools of Sutlej, near Wangtoo – A dying river (Photo by Sanjeeva Pandey)

Raising objections to the granting of clearances to dams on the last free flowing stretch of the Satluj River, the Himdhara Collective, an environment group in Himachal, today sent a submission to the Expert Committee of Ministry of Environment demanding Cumulative Impact Assessment for individual projects on the Satluj river basin. The committee, in its meeting to be held on 28thAugust 2018 is to consider the grant of Environment Clearance for SJVNL’s (Satluj Jal Vidyut Nigam Limited) 219 MW Luhri Stage I Hydro Electricity Project, that is  proposed downstream of the 420 MW Rampur Project in Shimla and Kullu Districts. The SJVN was earlier to construct a 750 MW project with a 35 km long tunnel in this stretch. “It was due to the objections of the local community that the massive tunnel will disturb the geology of the region, already prone to landslides that the project was dropped”, stated the submission. Instead, the HP government has now allocated three dams, namely, Luhri Stage I and Luhri stage II (163MW) and Sunni (355MW) in the same stretch. The key objection raised in the submission is that the committee instead of studying the over-all impact of the three projects put together, was looking at each project in a singular way.

The total land requirement for the three proposed projects is  654.02 hectares, that is twice the size of the land of the earlier proposed 750 MW Luhri project .Considering 70% of the required land falls in the category of ‘forest’, this would lead to more deforestation in the Satluj River basin which has already faced severe forest diversion,erosion and slope de-stabilisation. The submission highlighted that, “The move to build bumper to bumper dams on a single river basin is destructive and this is the reason why we have been saying that the Ministry of Environment should look at the cumulative impacts of the dams rather than for individual projects.”

In 2013, on clear directions from the Ministry of Environment, the HP Directorate of Energy had commissioned Cumulative Environment Impact Assessment studies for all the major river basins of Himachal Pradesh The process for Satluj river basin was initiated first, way back in 2013. A series of public consultations were held in Pooh, Rekong peo, Rampur where local communities and environmentalists had filed detailed objections. In fact, the DoE even appointed an independent Panel of Environmental and Social Experts, which submitted a damning report to the Himachal Government in 2015, raising that the state government was apathetic to the adverse impacts these projects had on the lives of local communities. However, since then, there has been complete silence on the CEIA study of Satluj river basin

“In 2017 we filed an RTI to  the DoE seeking the final report, but the matter was transferred to the Union Ministry of Environment who did not respond despite appeal in the Central Information Commission. The matter in now pending in the Central Information Commission”, Himdhara members said in the submission. For the last three years the Expert Committee of the ministry has been according clearances to hydro projects on the Satluj without even as much as mentioning the Cumulative Impact study that it itself had made mandatory to be conducted.

“The CEIA should have a bearing on the decision to be taken in the Luhri I, II and Sunni HEP, else the exercise (CEIA of Satluj river basin) itself will be rendered meaningless given that, in the middle zone of the Satluj river basin this is the last and the only stretch of the free flowing Satluj river”.

The submission demands that the CEIA of Satluj river basin should be first finalized and till then, all projects on the Satluj river basin must be put on hold. The issue of dam building in the Himalayas has also now become a major concern amongst mountain communities and environmentalists given the threat of disasters like cloud bursts floods and earthquakes to the lives and economy of the region.