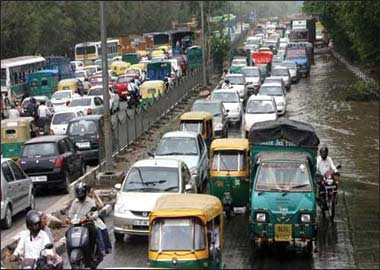 Delhi: Heavy rains lashed Delhi Saturday morning spelling chaos on city roads. The hour-long downpour in some parts of the city brought traffic to a halt and flooded roads.

While the weather office was yet to compile the statistics for the rainfall recorded, the traffic department said vehicular movement was severely hit in south and central Delhi.

The minimum temperature Saturday settled a notch below the average at 25.5 degrees Celsius, while the humidity stood at 92 percent at 8.30 a.m.

The met office said the day would remain cloudy.

The capital has recorded 13.7 mm of rainfall since Friday.