Political Parties play a key role in democracies as they contest elections, form governments, formulate policies and are responsible for providing governance and improving the lives of the common man. Political parties need access to money in order to reach out to the electorate, explain their goals/policies and receive inputs from people.
But where do they collect their funds from is what Association for Democratic Reforms (ADR) have collected data about and released it in a report?
An analysis of their Income Tax Returns and donations statements filed with the Election Commission of India (ECI) shows that the sources remain largely unknown. At present, political parties are not required to reveal the name of individuals or organizations giving less than Rs. 20,000 nor those who donated via Electoral Bonds. As a result, more than 36% of the funds cannot be traced and are from ‘unknown’ sources. While the National and Regional Political Parties were brought under the RTI Act by the CIC ruling in June 2013, they have still not complied with the decision. Full transparency is, unfortunately, not possible under the current laws, and it is only the RTI that can keep citizens informed.
For this analysis, 8 National parties (BJP, INC, AITC, CPM, NCP, BSP, CPI and NPEP) and 27 Regional Parties (AAP, AGP, AIADMK, AIFB, AIMIM, AIUDF, BJD, CPI(ML)(L), DMDK, DMK, GFP, JDS, JDU, JMM, KC-M, MNS, NDPP, NPF, PMK, RLD, SAD, SDF, Shivsena, SKM, TDP, TRS and YSR-Congress) were considered. However, BSP declared that it did not receive any funds from voluntary contributions (above or below Rs 20,000)/Sale of Coupons/Electoral Bonds or Unknown Sources of income.

Income of Political Parties from Known, Other known and unknown sources 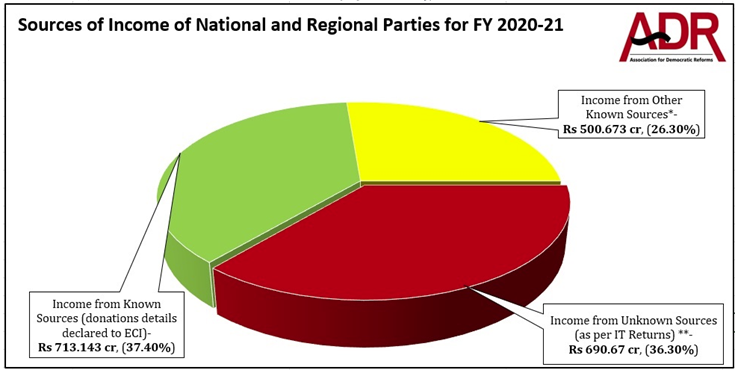 The Association for Democratic Reforms (ADR) was established in 1999 by a group of professors from the Indian Institute of Management (IIM) Ahmedabad.

To improve governance and strengthen democracy by working in the area of Electoral and Political Reforms, ADR for over 20 years has been gathering information, tabulating data and release reports pertaining to the political system of the country with emphasis on: