Manali: Cycling over some of the highest mountain passes in the world, forty-four year old Preeti Maske, a mother to two, pedalled day and night from Leh to Manali, a distance of 480 kms, to complete the non-stop ride within 60 hours.

Speaking to Hill Post, Preeti, a Pune resident said, “age is no barrier when one gets to live ones passion.”

“The most challenging part of the Leh-Manali route was sleep deprivation is it was a continuous, non-stop ride that needed to be completed within 60 hours,” she said. From Leh, Preeti started cycling for Manali on 22nd June.

Another challenge, added Preeti, was to manage the extremely low temperatures at high altitude passes, especially at night. I was quite enthusiastic about the ride and have dedicated it to the Border Roads Organization (BRO) which has been doing amazing work. BRO develops and maintains road networks in India’s border areas and friendly neighboring countries.

The average altitude of the Leh-Manali route is about 3600 meters above sea level. “I did practice hard for this Leh-Manali non-stop high-altitude expedition,” said Preeti. 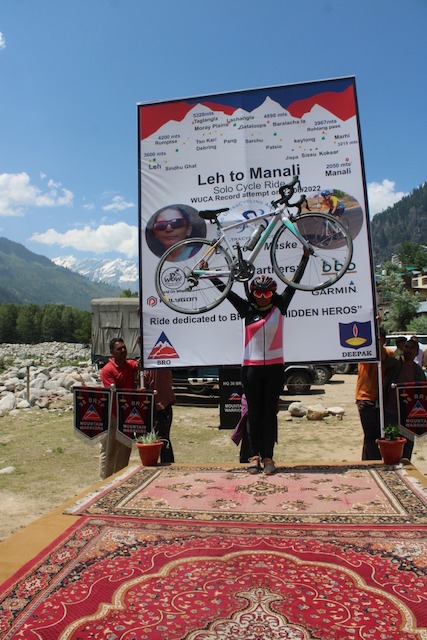 The expedition included a crew of six persons. “I was in Leh for ten days before the ride so as to get acclimatised to the high-altitude terrain,” she said. For nutrition, Preeti says that she mostly took to a high-protein liquid diet for quick and continuous energy replenishment.

The spirit of extreme adventure has kept Preeti busy, piling up several records to her name including covering the Srinagar-Leh-Khardungla top in five days.

Last year, she completed the Golden Quadrilateral route — Pune-Bengaluru-Chennai-Kolkata-Delhi-Rajasthan–Mumbai-Pune, a distance of over 6,000 kms in 24 days and six hours.

In May she had participated in another high-altitude cycling event in Uttarakhand, cycling at 3,400 meters on the Indo-China-Nepal border at Tour-de-Kailash cycling expedition.