Manali: With an eye on the upcoming state assembly elections Aam Aadmi Party (AAP) supremo and Delhi Chief Minister Arvind Kejriwal and Punjab CM Bhagwant Mann held a road show in Kullu, today. The APP leaders had last visited the state’s Hamirpur district on June 11. This visit comes in the backdrop of AAP making inroads into the political space in Himachal.

With all praise for Punjab Chief Minister, Kejriwal said no other leader has ever sent his own minister to jail for illegal activities. Kejriwal was referring to Punjab Health Minister Vijay Singla who was sacked by the state cabinet and was later arrested on charges of corruption.

Bhagwant Mann at the time said that his government would have zero tolerance against corruption and himself announced Singla’s removal from the council of ministers. Mann said the decision was made after he came to know that Singla was allegedly demanding one per cent commission in tenders and purchases of his department. 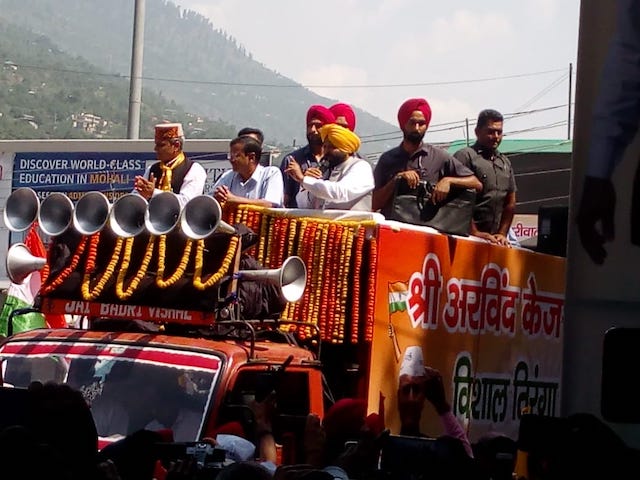 Addressing a rally in Kullu, Kejriwal, whose party fights elections on the issue of corruption said, “Did you ever hear about a CM sending his minister to jail? Mann Sahab found out that his Health Minister was involved in unscrupulous activities. Opposition and the media didn’t know. Had he wanted, he could’ve brushed it under the carpet or asked for his share from the accused. But instead he sent him to jail.”

This is Arvind Kejriwal’s fourth visit to the hill state in recent days. Previously, he either addressed rallies or held road shows in Hamirpur, Kangra and Mandi. Remarkably, the state has never seen the same party rule for two consecutive terms in the last 35 years and it will be an uphill task for the ruling BJP to hold on to power this time.

In a major overhaul for the AAP on the party organisational level in Himachal Pradesh, a new party brass was elected after senior functionaries jumped ship to the BJP two months ago. The Aam Aadmi Party, on June 8. announced a new party unit for the state with 379 office-bearers, including one secretary, six joint secretaries, one treasurer, and eight vice presidents. For each Assembly Constituency, it has appointed organisation secretaries. Other office bearers include a youth, schedule caste, OBC, and Women’s wing.

About six lakh people have already joined the party in the state, informed Rajya Sabha MP and the party’s co-in-charge for Himachal Pradesh, Sandeep Pathak. He added that the party has established the required organisation structure in 18,000 villages and the committees will be set up at the booth level too.

AAP is seeking the reins of the state on the basis of the performance in Delhi on the back of the ‘Arvind Kejriwal model of governance’. During the last address to the people of HImachal Pradesh, Kejriwal had urged them to give the party one chance, if they wanted their children to have a better education and bright future.

“If you want the 8.5 lakh students studying in Himachal Pradesh government schools to have a bright future, give a chance to the AAP. The Delhi government spent Rs 80,000-85,000 crore on government schools in the last seven years by allocating 25% of the total budget of the national capital towards education,” said Kejriwal.