An annual additional expenditure of Rs. 1785 crore would be incurred on account of the revision of pension.

Of the total, about 1.30 lakh pensioners would get increased pensions from 1st January, 2016. The remaining about 43,000 employees, who retired between 1st January, 2016 and 31st December, 2021 would also get revised pension and gratuity.

Now minimum pension/ family pension would increase from Rs. 3500 per month to Rs. 9000 per month from 1st January, 2016. The cabinet also approved to increase the limit of gratuity from Rs. 10 lakh to Rs. 20 lakh from 1st January, 2016 which would also be applicable for NPS employees. Pensioners/family pensioners of the State above 80 years would be provided due additional pension benefit on revised pension/family pension.The Cabinet also decided to provide Invalid Pension and Family Pension to NPS employees of the State Government on which Rs. 250 crore would be spent.

The Cabinet also decided to provide 31 percent dearness relief to the pensioners from 1st July, 2021.

After reviewing the Covid-19 situation in the State, the State Cabinet decided to open all the educational institutions in the state from 17th February, 2022. It also decided that all gyms and cinema halls would be opened and all kind of langars would be allowed.

New Fire Stations To Be Opened

It also gave its approval for creation and filling up of 8 posts of Sub Fire Officers in the Himachal Pradesh Fire Services Department on contract basis through Himachal Pradesh Staff Selection Commission.

It also gave its nod for creating and filling up of one post of Sub Fire Officer, 2 posts of Leading Fireman, 14 posts of Firemen and six posts of driver-cum pump operator in each newly created Sub Fire Station and one post of leading fireman, 12 posts of firemen and four posts of driver cum pump operator in each newly opened Fire Post besides sanctioning one Type-B Water Tender, one Water Browser and one CO2 vehicle for each newly opened Sub Fire Station and one Type-B Water Tender and one Quick Response Vehicle for each newly created Fire Post.
It decided to open Jal Shakti Sub Division at Sangla in Kinnaur district, under Jal Shakti Division Reckong Peo, alongwith a new Jal Shakti Section at Karchham, besides creating and filling up of four posts of different categories to manage these offices. It also gave its consent to open Jal Shakti Division at Katrain in Manali Assembly Constituency, opening of new Jal Shakti Sub Division at Bajaura in Banjar Assembly Constituency of Kullu district, alongwith creation of new section under this Division alongwith creation of 21 posts of different categories to man these offices. It also decided to shift Jal Shakti Division No. II Kullu from Shamshi to Larji alongwith staff.

The Cabinet gave its nod to open new Public Works Department Sub Division at Chandi in Solan district alongwith creation and filling up of 7 posts of different categories. 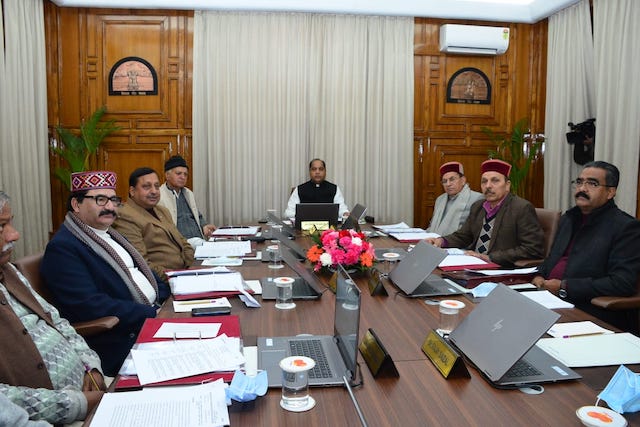 It also decided to upgrade Primary Health Centres at Cholthara, Sajao and Cholgarh in Mandi district to Community Health Centres, alongwith creation and filling up of 16 posts of different categories to manage the Centres. The Cabinet gave its approval to open Primary Health Centre at Bakarata Darpa in Mandi district alongwith creation and filling up of three posts of different categories to man this centre. It also decided to upgrade Community Health Centre Kaza in Lahaul-Spiti district to Civil Hospital and opening of Health Sub Centre at Kemo.
The Cabinet also gave its consent to purchase and operationalize 50 additional ambulances under 108-National Ambulance Services for providing free transportation service to patients requiring immediate care.

It gave its approval to start Science classes in Government Senior Secondary School, Triloknath in Lahaul- Spiti district alongwith creation and filling up of three posts of lecturers on contract basis.

The Cabinet gave its nod to the draft of Memorandum of Understanding for hiring of Single Resource Consultancy for establishment of Project Management Unit for implementation of new centrally sponsored scheme ‘Financing Facility under Agriculture Infrastructure Fund’ between the State Government and M/s NABARD Consultancy Services Pvt. Ltd. This scheme would help the farming community in a big way as interest subvention and credit guarantee would be given for the post-harvest infrastructure and for building of community farming assets like e-market platforms, warehouses, silos, pack houses, cold chains etc.

It decided to notify Sardar Patel University Mandi, Himachal Pradesh (Establishment and Regulation) Act, 2022 from 1st April, 2022 to set up a new State University at Mandi.
The Cabinet also allowed to allot land in favour of Hindustan Petroleum Corporation Ltd. for setting up of IG Ethanol Plant at Jeetpur Baheri in Una district at a lease amount of Rs. 1 per square meter.

It also allowed the opening of Sub Tehsil at Sadwan in Nurpur tehsil of Kangra district.

The Cabinet gave its nod to open a new Government Industrial Training Institute at Village Karga in Keylong tehsil of Lahaul-Spiti district.