Some years back I brought to focus the fast vanishing native ‘Lady’s Slipper Orchid’ from the flora of Shimla, Cypripedium cordigerum D. Don; more commonly known as the ‘Heart-Shaped Lip Cypripedium’. Nearby Shimla it is known as Kainchhe, while in Nepal it is called Jibri. A beautiful species of lady slipper orchids which is endemic to the Himalayan range, from Pakistan to Bhutan and South East Tibet. Ongoing anthropogenic pressures have threatened its populations to such an extent that it has been declared ‘Rare’ in Red Data Book of Indian plants, besides it is listed in Appendix II of CITES. It is placed in the vulnerable category by the IUCN Red List, which if evaluated now could easily become Critically Endangered (CR). 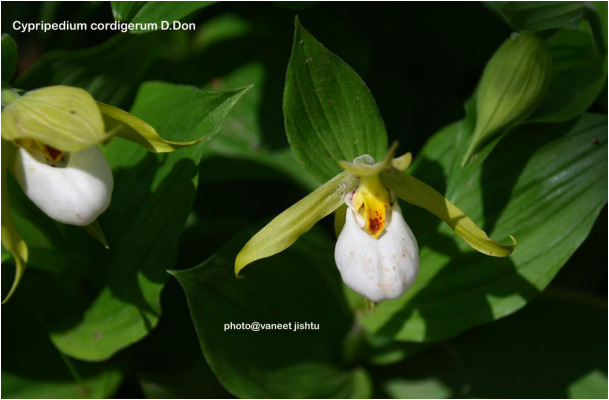 Loss of habitat has caused serious damage to its natural populations. The orchid was once much in abundance across the Himalaya, but the ever-increasing anthropogenic pressures (deforestation, overgrazing, fodder collection, forest fires, habitat fragmentation, etc.), have resulted in shrinkage of its natural habitats and thus the sharp decline in its populations. The species has also been over exploited because of its ornamental and therapeutic importance. While going through literature, I came upon an interesting reference where 150 kg of live C. cordigerum had been exported to the US from India during 2002, vide CITES permit No. A 2609 (http://www.bsienvis.nic.in/CITES/Cypripedium%20cordigerum.pdf). This really surprised me as 150 Kg of live orchids must have accounted for a very large number of individual plants. Macy Troy (2017) comments that the lady slipper orchid (or Cypripedium) is becoming less and less common everyday because people think you can just pick them for fun or for decoration in your house. But these orchids are living things and like us they have feelings. It is sad for her to see that such a beautiful flower is disappearing so quickly.

The word Cypripedium was first referred by Linnaeus in 1737. Interestingly, the name refers to the land of Cyprus where Aphrodite, the Greek Goddess of love was born. The other half of the word, pedilum means shoe or slipper (in reference to the shape of the flower). However, the centre of diversity of the genus lies in China where most Cypripedium species are found. Only 6 species of Cypripedium are distributed across the Indian Himalayan Region (IHR). Besides, Cypripedium cordigerum, there are two other species of this genus (C. elegans and C. himalaicum) reported from the North-West Himalaya. In case of Himachal, besides C. cordigerum, another very rare C. himalaicum has been reported from the Great Himalayan National Park.

The altitudinal occurrence is around 2200 – 3500 m in India and 2000 – 4000 m reported from Pakistan. In Himachal, the species has been reported with sporadic distribution from Kullu, Shimla and Sirmaur districts.

The orchid is 25-60 cm tall, with pale yellow sepals and petals with a large creamish-white distinctive pouch, the labellum. The stem has 2 – 5, elliptic, well spaced leaves and blooms on a 1 or rarely 2 flowered inflorescence. The flower is pretty and distinctively, very striking; slipper like, hence the name Lady’s Slipper Orchid.

Hatinder Thakur, an enthusiastic field forester, comments that the plant is not used by the local people as they consider it poisonous. However elsewhere, Cypripedium cordigerum like other orchids are considered as aphrodisiacs and as nerve tonics in Pakistan. In Nepal, the roots are used as tonic, while the young leaves are cooked and relished as a vegetable. C. cordigerum based herbal formulations has been used for treating mental disorders in the age old traditional Indian healing system. 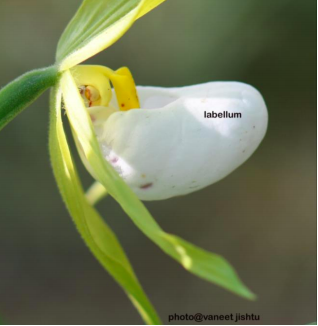 The flowers belong to the group of “trap” flowers which practise an interesting mode of pollination in nature. Insects, as they crawls in, can only escape from the slipper-like labellum of the flower, through a tunnel near its base from where it is directed first to the nearby stigma where possible pollinia from another flower on its back are stripped off and while escaping, the sticky pollen from the nearby anthers adhere to its back for pollinating another flower.

Conservation: A novel venture by the Wildlife Wing of the Himachal Pradesh Forest Department in collaboration with the Himalayan Forest Research Institute, Shimla for the conservation of rare, endangered and threatened (RET) plants is being undertaken at the Western Himalayan Temperate Arboretum at Potter’s Hill, Shimla. Under this programme, a wide survey was conducted for the distribution of this rare orchid, with help from field staff of the forest department. The germplasm in the form of its tubers was collected from its native habitat and brought to the arboretum. Conditions similar to the one in nature were created and maintained, under shade house conditions.  The results have been very promising, with the orchid not only surviving but also propagating, adding new plantlets each year.

Sh. Vinay Tandon, the man behind setting up this regional arboretum for native plants, is confident that perhaps one day we can be in a position to re-introduce these vanishing orchids back into the wild? His suggestion to the Wildlife Wing is to step in and ensure in situ conservation of such species within and around the Shimla Water Catchment Sanctuary.