New Delhi: A Delhi court a little while ago acquitted Congress leader Sajjan Kumar in a case related to the 1984 anti-Sikh riots, triggering anguished protests and even some tears outside the court complex.

District Judge J.R. Aryan convicted the other five accused in the case related to the killing of five people in Delhi Cantonment area following the assassination of Indira Gandhi Oct 31, 1984. 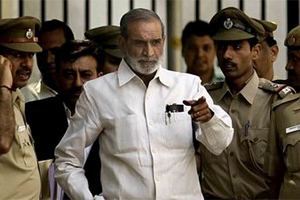 As protests broke out outside, a shoe was hurled at the judge inside the courtroom in the Karkardooma complex, an eyewitness told IANS.

The order led to furore amongst members of the Sikh community who were hopeful that Sajjan Kumar would be brought to justice. Slogans against the Congress were heard and some people tried to climb over barricades and storm the complex.

“Congress is a party of murderers, Though we respect the court, we are sad about this judgment. We never thought he would be acquitted,” an angry Sikh said.

Sajjan Kumar was facing trial along with Balwan Khokkar, Mahender Yadav, Girdhari Lal, Kishan Khokkar and Captain Bhagmal for allegedly conspiring and inciting a mob against the Sikh community.