“A village that has everything but it’s still a village by its architecture, nature, ambiance, culture, and heritage…”

The quest to witness the much-acclaimed ornamental, medieval splendour and the first heritage village of Himachal led me to ‘Pragpur’, in the picturesque valley of Kangra.

Pragpur was a model village three centuries ago and along with the nearby village of Garli was declared as “Heritage Villages” by the Himachal Pradesh Government in the year 1997 and 2002 respectively.

Lying in the shadows of Dhauladhar mountain ranges and river Beas flowing in the close vicinity, the village of ‘Pragpur’ derived its name from the name of Princess Prag Dei of the Jaswan Royal family, who successfully resisted plunderers and pillagers during numerous attacks and invasions.

The word ‘ Prag’ in Sanskrit means ‘ pollen’ and ‘pur’ means’ full of ‘, which implies ‘full of pollen ‘, as this area is said to be ablaze with blossoms in the spring season.

The location of Pragpur was carefully chosen, where it received the astral influences of the three neighboring Shakti temples located at Chintpurni, Brajeshwari, and Jwalaji, centuries ago.

Once built by the Kuthiala/ Sood community, Pragpur and Garli became part of a heritage zone due to the presence of various magnificent ornamental houses, old antiquated water tanks, cobblestone, and graveled linear streets, aesthetically carved elegant Havelis and villas, and old slate-roofed houses, a ubiquitous feature of the hill houses.

My recent visit to these heritage villages was not in accordance with what many describe the place in internet articles or the many travel blogs that boast about the place. The ground reality was way different from what was projected. It appeared more to be a much-hyped version of this derelict place.

Most of these architectural marvels have decayed to a wretched state.

As one moves through the rickety narrow lanes and alleys, leading to the heritage village, all you get to see is the disintegrating and withering sites, almost ready to bite the dust.

The contemptuous attitude of the people and authorities concerned towards the antiquities appears to be somewhat appalling.

The taal/pool (water tank) constructed before 1868 at Pragpur is still functional with a lion’s mouth like structure used as an outlet of water. The pool is surrounded by many heritage structures including the Nehar Bhawan but the pool appeared more to be in a state of stagnation.

The market area beginning from the pool leads us to a once beautiful temple called “Lala Gauri Mal Butail Mandir” but in the times of COVID, the maintenance and upkeep under a single priest has become an arduous task.

Though the locals appeared to be much relaxed and friendly with their game of cards under the mighty Peepal tree outside the temple or in the nook of the market but these heritage villages are soon losing their sheen. 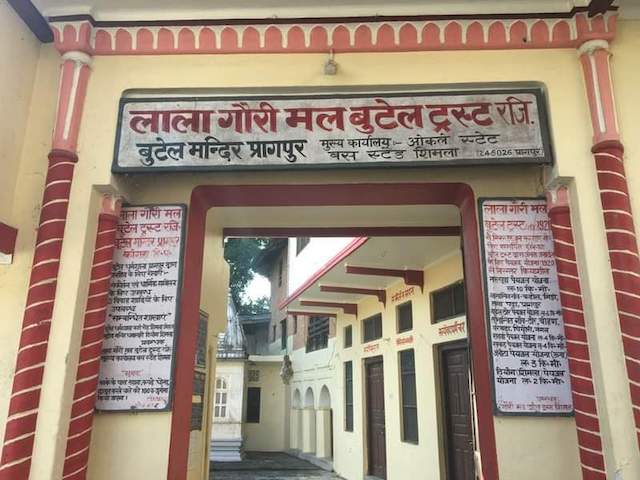 Be it the callous attitude of the locals or the blatant disregard by visiting tourists, the toppling pillars, the dilapidated, decaying, and crumbling structures are the only sites to be witnessed and revealed at these heritage hamlets.

The traditional village was nowhere to be found, the storehouse of the history was more of an abandoned dump yard or maybe the plunderers had again set in with their nefarious activities.

The enterprising and prosperous Sood community which had settled there in the nineteenth century got the ideas of building schools, hospitals, and mansions, from their extensive foreign travels. But over the years some houses were caught in family disputes leading to feud over properties and many other houses were abandoned for a better promising life in the cities.

The treasures of the past are now giving a bleak and barren look into the uncertain present and future.

The only saving grace of these raw and rustic heritage villages is the conversion of a few of thems to posh resorts, for commercial purposes, to serve the modern needs of rural tourism, as the case of Judge’s Court at Pragpur and Chateau Garli at Garliple.

Though our country is a living example of one of the world’s oldest civilizations pertaining to its historical and cultural legacy, we miserably fail to keep our monuments and heritage sites intact.

Apart from the preservation and restoration part, the upkeep of these heritage structures is a Herculean task and requires enormous effort.

But the biggest threat is not from foreign forces or invaders but lies somewhere within us, as these places reduce to a deplorable state.

It’s ironic that instead of carrying the legacy of these heritage structures forward, we have grown blase’ and indifferent towards them. We have taken them for granted for too long now. Its high time we should start taking them seriously so that we can preserve our roots and provide a sense of identity and continuity in a fast-changing world for future generations.

“Our roots are clinging, we shouldn’t knock down so many old ‘buildings.”
-Whit Stillman