The metaphor is a useful literary and cognitive tool; it can, in just one image, idea or phrase convey more than a historian or writer can in a thousand words. To take some examples from our own country: the white Gandhi cap in the 1930s and 1940s reflected our collective desire for independence; in the 1950s the Bhakra Dam became the metaphor for modernisation; the Green Revolution in the 60s reflected our efforts at food self-sufficiency; the Emergency in 1975 was a synonym for political overreach; in the 80s and early 1990s the Maruti 800 was a metaphor for our industrial resurgence; the cell phone was the symbol of our coming of age in the digital world in the first decade of the new Millenium; Vijay Malya and Nirav Modi encapsulated the corruptness of our political and financial ecosystem in the second decade. Each was a symbol of the times they pertained to.

And now, as we enter the third decade of the 21st century, we have a new metaphor: the Covid vaccine. It signifies the beginning of the end of a period which brought homo sapiens to its knees as nothing had done before- not the plague, not two world wars, not Hiroshima or Nagasaki, not Krakatoa, not SARS or Ebola. But, as usual, our sub-continental creativity and genius has imbued this metaphor with a wealth of variety and sub-sets, to such an extent that it has become a very mirror of today’s India. I give below some of the subsidiaries of the parent Vaccine Metaphor.

Mr. Shashi Tharoor has identified eight types of nationalism in his latest book, The Battle Of Belonging, but he has missed out on one: Vaccine Nationalism. Our government has sought to make it a metaphor for “atmnirbharta” and elevated the vaccine from a curative to a nationalist status, perhaps hoping to milk from it not just antibodies but also a few votes. The vaccination campaign has been billed as ” the world’s largest ” such exercise, forgetting that, with 1350 million people, anything we do will be the world’s largest. Just as the migration of labour post the lockdown was the biggest global migration after the Partition, and the ongoing farmers’ protest has been the largest such agitation in the world in recent times. So, while size matters it is not always something to crow about. It has been announced that we will save the world with our vaccines ( which is probably right too) but we must remember that even before the pandemic, we were already supplying half of the world’s global vaccines. We can, of course, be more than justifiably proud of our achievements in this field ( achieved, incidentally, long before the present govt. came to power in 2014), but to use the vaccine to further promote a party’s political agenda is egregious at best.

It is the same Vaccine Nationalism which has resulted in the approval of a second vaccine even before the results of its Phase 3 trials are known. The essential ( and mandatory) Phase 3 trial results are supposed to be available only in November 2021, so the hurry to approve it ten months prematurely can only be ascribed to a misplaced “atmanirbharta”. But the decision has inevitably produced a lot of Vaccine Politics, with the opposition questioning the govt. and dubbing it as the BJP vaccine; some states have announced that they will not accept this particular formulation. The central govt., however, is offering them the same deal it has offered the protesting farmers– take it or leave it. Covaxin or no vaccine, appears to be the message.

In the last six years we have lost all our neighbours to the MEA’s bumbling incompetence and China’s billions, so now Vaccine Diplomacy is expected to reverse the tide. We have decided to supply the India made shots to all our disgruntled neighbours such as Maldives, Bangladesh, Nepal, Myanmar, Srilanka, and Mauritius, and also to the gruntled ones like Mauritius, Afghanistan, Bhutan, Seychelles. Pakistan too is standing in line, with its sleeves rolled up for a jab but we have yet to decide on this second surgical strike. The question which our spin doctors ( not medical doctors) are asking, however, is this: how long will the beneficial effects of the vaccine last in our neighbouring countries? Will their antibodies prevail over the BJP govt’s antibodies and the virus of arrogance? For the time being, however, our vaccines will do more for friendly external relations than six years of blind man’s bluff by the Ministry of External Affairs. Maybe it’s now time to merge the MEA with ICMR.

There have been a few surprises too. It was expected that the army, or at the very least General GD Bakshi with his arsenal of four-letter words, would have to be called out to control the mobs once distribution of the vaccine started. That has not happened, and the queues outside my local “theka” are longer than the ones at the vaccination centre. This is the result of an unexpected reaction called Vaccine Hesitancy, which in turn is a consequence of Vaccine Scepticism. The latter stems from the usual reluctance of the govt. to share any information with the public: The EUA ( Emergency Use Authorisation) data for both the vaccines, the efficacy data for the Covaxin, and why the second vaccine which was supposed to be a ” back-up” vaccine is now being distributed in the first phase itself along with Covishield. This opaqueness, which is now a familiar SOP of this govt., has resulted in justified scepticism and hesitancy.

This reluctance to put it in the arm has been accentuated by the hesitancy of our political leaders, Ministers, even the Prime Minister to practice what they preach. The biggest question being asked these days ( other than “Where is Arnab Goswami hiding?”) is- Why are our leaders not taking the shot? Just about every other important head of government has done so- Biden, Kamla Harris, Boris Johnson, Bolsanaro, Netanyahu, Putin, the UN Secretary-General, the Saudi prince to name just a few. Why are our worthies hiding behind the “tehzeeb” of Lucknow- “pehle aap”- when they are otherwise first in line for all the goodies of life? It has been officially announced that they will take the jabs in the second phase, after the 20 million or so frontline workers are covered. At the current rate of inoculations that may take more than a month. How about leading from the front, gentlemen, and inspiring some confidence among the serfs?

With international tourism hitting rock bottom, the leisure industry is now setting its sights on Vaccine Tourism, a variant of medical tourism, the moment the govt. allows vaccines to be sold privately in the open market. This should not take long, given that Pfizer, Moderna and Johnson are all lining up for approvals. Once these are available in the market, expect chartered flights from the Gulf countries by the dozen- a quick jab in Delhi or Mumbai, a week in Goa to recover from the traumatic experience, and back to the souks and oil-fields. The Tourism Ministry, I am told, is holding its breath and licking its chops behind the masks.

And finally, this being India, how can we not have our own brand of Vaccine Humour? Here are two specimens, circulating as widely on WhatsApp as the virus itself: 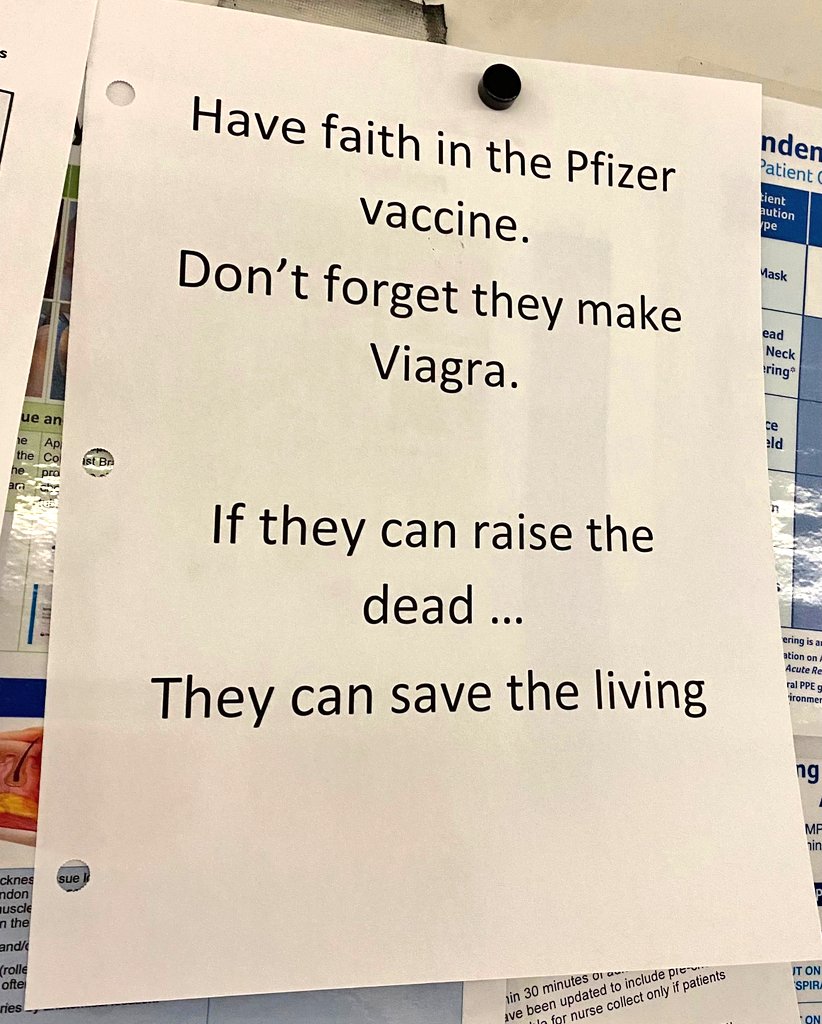 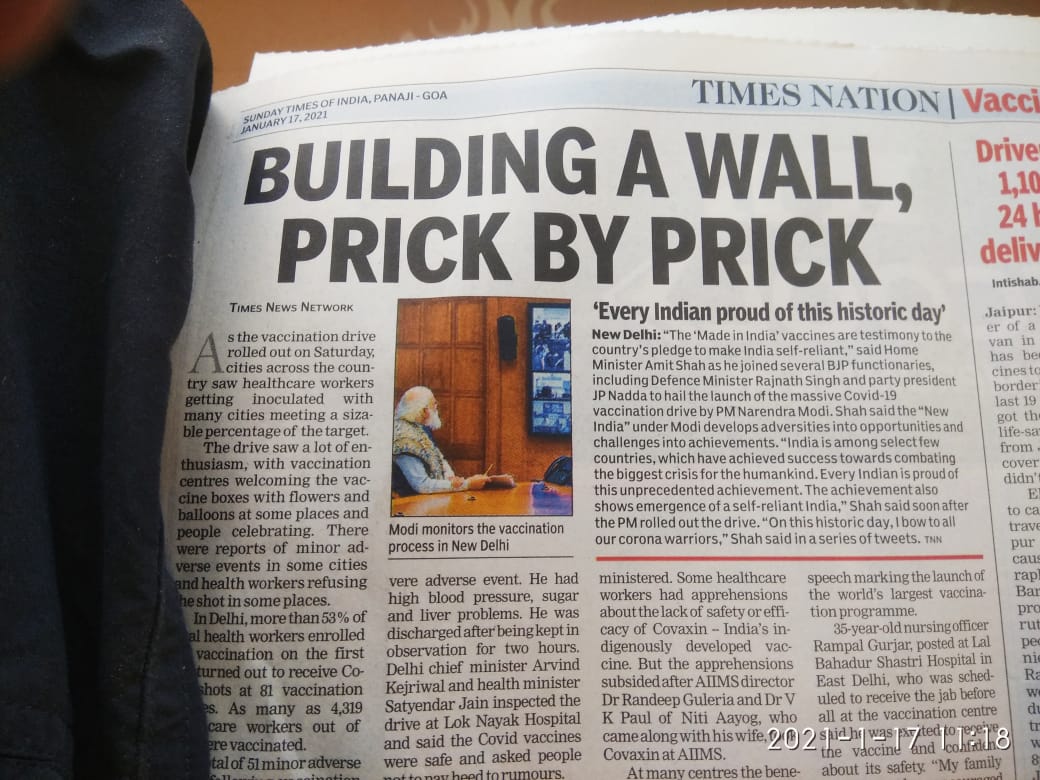 Here’s the second example of Vaccine Humour, though I suspect unintended. Now, one was aware that our journalism had descended to Mariana Trench depths in recent times, but this takes the lemon tart. The article refers, of course, to the vaccine wall being figuratively built by the govt. to protect its citizens, but the terrible pun is an error of phallic proportions. It is certainly not a printing error- one prick can be a printer’s devil, but two pricks has to be the editorial board! One has read of an arm in arm friendship, hand in glove chicanery, ball by ball commentary, but a prick by prick wall is a first for me.
And finally, of course, there are all those questions about Vaccine Immunity: how long will the antibodies last? A friend of mine informs me that the only chaps who are not bothered about this are our judges: you see, they already have plenty of immunity- from accountability, prosecution and criticism. Which is why it makes no sense for them to stop physical court hearings- nothing can touch them, for if a virus were to attack them that would be ultra vires, wouldn’t it?