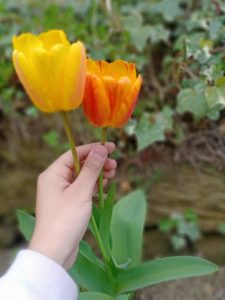 Manali: As countries around the world increase their actions to contain the spread of Covid-19, implications are beginning to be felt across the horticulture and floriculture sectors in Himachal Pradesh.

Horticulturists in the state have been badly hit because of the lockdown. In the absence of transportation facility, farmers are harvesting their crops only to dump them in the fields. With there being no demand for flowers at major temples which are closed and marriages, fairs and other functions have been called off all over India, the spring crop is a wasted one.

As flowers are a highly perishable and in the absence of cold storages in state, it would be of no use within days. Not only flower growers, but people trading in flowers are also counting their losses as many of them had purchased stocks to market at the recently-concluded Navaratras festive days, but couldn’t sell them due to all major temples having shut their doors for pilgrims this year.

Mandi district is one of the largest growing area for Carnation flowers in India. Grown over an approximately 1 lakh square meter area, the flower crop this season was very good due to favourable weather conditions, but the coronavirus lockdown has all but destroyed the crop for the farmers.

Counting his losses Ravi Mehta, who does not know what to do with his flower crop says, “flowers is a highly perishable crop which in the absence of cold storage facilities, will be of no use within days. Costs for plantation of the crop, running labour wages and other material cost have to be met even in a lockdown. And now when I need to market the flower and I can’t, in such a situation I don’t know what to do with my crop.”

Other than carnation, Himachal is a major producer of Marigold, Gladiolus, Rose Lilium, Gerbera, Dhalia, Daisy and other seasonal flowers. A lot of growers are also growing exotic flowers like Alstormeria, Lumonium, Iris, Tulips and Orchids.

The lockdown has also hit the governments ambitious ‘Himachal Pushp Kranti Yojana’ a subsidized scheme launched in 2018 to boost floriculture in the state.

The unusual stoppage of all economic activity has the states horticulture, backbone of the rural economy, staring at a major crisis. The necessary preparatory work on the farms and orchards during March–April has been severely hit.

The supplies of inputs from machinery to fertilizer and crop protection products like anti-hail nets and honey bees that help in the pollination process, are all disrupted by the lockdown. The lockdown is also preventing farmers from going to their orchards. Fruit growers are worried over packaging material for marketing their produce.

Factories at Kala Amb in Sirmour district, Baddi and Barotiwala in Solan district which manufacture cartons, boxes and crates for fruit growers across the state have been shut down under the governments orders which is giving horticulturalists sleepless nights, despite assurances by the state government.

The state’s cherry produce is almost ripe. Stone fruits — including plums, apricots, bayberries, green almonds and peach — will be ready for harvesting and marketing by mid-May and the apple -pear harvests starts by mid-June.

Normally by March, manufacturers of packaging material evaluate requirements and begin production, but this time around, it is yet to begin. A crisis is already brewing as cherry farmers require about 5 lakhs small boxes for packaging of the crop and the fruit picking is to start in two weeks time but there are no small carton boxes available.

The requirement is higher for stone fruit that follows barely 20 days after cherry crop. The need for apples is much higher. Some fruit growers organisation are already pressing for bringing manufacture of packaging material under essential services to start production as soon as possible.

Other than availability of packaging material, restrictions on movement of people, especially Nepali workers who come for seasonal work to Himachal, has caused a shortage of labour.

The government on its part is claiming that all the valid concerns of fruit producers will be adequately addressed.

Roshan Lal Thakur, an orchardist from Manali said “a good fruit crop would be of no use, if no immediate action is taken. Delay in action at this point is bound to have a cascading impact in future.”