Speaking on the occasion of inaugurating a new lab building of RFSL, today, the chief minister said the facilities available at this laboratory had been grouped into three divisions, which included biology, chemistry and ballistic science. Each division was headed by a scientific officer. 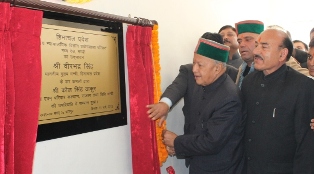 Presently the lab was providing services to police based in the five central districts of the state.

Constructed at a cost of Rs 2 crore the new building at Bhiuli in Mandi district would facilitate police trainings in forensic sciences.

The Mandi forensic lab had been approved by National Investigation Agency and would be upgraded under modernization of police forces program of the union government.

RFSL had its own library and the institution was under mailing list of CBI Bulletin and The Indian Police Journal.