The country is witnessing an unprecedented debate on CAB with government trying to reassure people that there is nothing to be afraid of for any Indian citizen of any denomination. The opposition on the other hand is painting the bill as a draconian instrument that goes against the secular credentials of the country and targets Muslim community in particular. The Home Minister’s speeches in both houses of the parliament were perhaps a master class for any debate in the parliament and would qualify among the finest witnessed in the last seventy two years. The opposition in contrast has not been as convincing and therefore they have relied more on public rhetoric and fear mongering rather than a more balanced assessment of the bill.

Citizenship of a country grants an individual civil and political rights in that country. Articles 5 to 8 of Indian Constitution govern the conditions under which an individual can get Indian citizenship. Article 9 governs the conditions when the same can be revoked. Article 10 gives the right for continuation of the citizenship and Article 11 gives government the authority to make rules related to citizenship. The Citizenship Act of 1955 was enacted by the parliament under Article 11 of the constitution. This bill lays down the applicability of the Indian citizenship based on birth, descent, registration and naturalisation. It also foresees future by adding a clause about grant of citizenship to people who may be part of a territory that India may add or annexe in future.
The bill of 1955 bars illegal migrants from acquiring Indian citizenship. An illegal migrant is a foreigner who enters the country without valid travel documents, like a passport and visa, or enters with valid documents, but stays beyond the permitted time period. However governments in the past have made exceptions by acts of parliament, under Article 11 of the constitution, to grant citizenship to such migrants. Grant of citizenship to over 150,000 Tamil migrants from Sri Lanka in 1974, by Rajiv Gandhi government, is one such example. 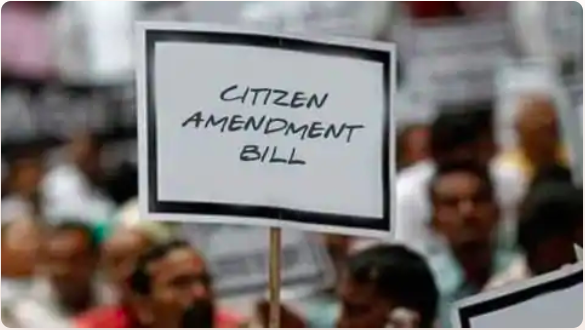 The 2019 bill (CAB), which is applicable to all states and Union territories with exceptions as may be applicable, seeks to amends the Citizenship Act, 1955 to make illegal migrants who may be Hindus, Sikhs, Buddhists, Jains, Parsis and Christians from Afghanistan, Bangladesh and Pakistan, eligible for Indian citizenship. It has reduced the minimum residency period in India to seven years from the earlier twelve years to apply for citizenship. The bill includes a provision to cancel the registration of Overseas Citizen of India (OIC) in case they violate any law. In principle there is no controversy on the OIC issue except that it is a bit vague since it does not list out specific crimes.

The first charge on the government is that the bill is discriminatory in nature as it includes only six religions and overlooks others, mainly Muslims, and is limited to migrants from only three countries. The government’s logic for including the six religions is that the followers of these are minorities and are subjected to religious persecution in the three Islamic countries of Pakistan, Bangladesh and Afghanistan. Their numbers have fallen sharply since 1947 and that data, which cannot be refuted, is a testimony to their prosecution. The government further counters this charge by stating that this bill is about religious persecution of minorities. It is unthinkable for Muslims to be persecuted in their own countries that have officially declared themselves as Islamic countries and where they are in majority. So it is logical to keep them out of the purview of this bill. Muslims can however still apply for Indian citizenship as per Indian laws that govern grant of citizenship to anyone across the world irrespective of their religion, colour or nationality. This is supported by official data where 566 Muslims have been granted Indian citizenship from 2014 to 2019 by the current government.

The second charge is about the inclusion of only Pakistan, Bangladesh and Afghanistan in the CAB. This is mainly because of the need to offer citizenship rights to lakhs of refugees from these nations who are already in India but continue to be refugees even after being here for decades. They have been denied civic and political rights which the government wants to correct. This bill, limited to minority migrants from the three nations, must also be seen as a corrective measure for the problems that arose in 1947 because of partition of the country. Some Hindus, Sikhs and others remained undecided at that point of time while some could not return to India due to various reasons beyond their control. This bill now offers them a route to be granted Indian citizenship in case they are already here or if they decide to do so later. In light of this the aim of the government was not to bring in a universal or general bill that applies to all countries and all religions. This is logical and well within Article 14 of the constitution.
The third charge is that it is against secular credentials of India and its constitution as it only includes six religions. The government counters this by saying that it does not impact the secular status of India in any way as this law does not change the rights or privileges of any Indian citizen, irrespective of his religion or faith. The aim of the bill is only to safeguard religious minorities, with Indian roots, in the three nations that are included in the bill. By giving citizenship to migrants from such minorities, Indian secularism is not affected in any manner. This is true, sceptics notwithstanding.

The fourth charge is that CAB violates Assam accord where cut-off date was 25 March 1971 but now that date will shift to 31 December 2014. Thus it will allow more Bangladeshi migrants into Assam. This is a fair argument as here CAB is also in direct conflict with National Citizens Register (NRC) in Assam where cut-off date is 1971. Assamese are fearful of the fact that most Hindu migrants from Bangladesh are Bengali speaking and with the new cut-off date, Assam’s culture and language will be threatened by Bengali speaking population which will increase by large numbers. As per 2011 census, Assamese speaking population was down from 58% to 48% while Bengali speaking population was up from 22% to 32%. Therefore the argument is valid. To counter this centre has given assurances to the state that proper safe guards will be instituted to avoid this. But so far it is only an assurance and therefore the riots. The other states of North East, including Sikkim, are also opposing the bill for various reasons. Despite most of their areas being under Inner Line Permit (ILP) where outsiders have to register and seek a permit to enter the states, most of them still have a lot of apprehensions. These are mainly influx of Chakmas and Hajongs from Bangladesh, Bru refugees from Myanmar, Tibetans and overflow of Bengali migrants from Bangladesh who do not find place in Assam since all of them will be covered under CAB. These states are worried that demographic changes due to influx of non-state subjects will endanger local cultures and languages apart from creating a pressure on already scares resources in these areas.
The question here is why is the NDA government so committed to this new CAB? While India officially remains a secular nation, yet only very hard core sceptics would deny that it remains predominantly a Hindu nation. While Muslims and Christians can bank on scores of countries across the world, as far as Hindus, Sikhs and Jains are concerned, they only have India to fall back on. Christians have been included since in the three countries that are included in CAB, most would be converts from Hindus or other local religions. Interestingly Muslims Christians appear to be included here as there are no exceptions. Buddhists have been included since India is the birthplace of this religion. Inclusion of Parsis is not surprising since India is their nation after they took shelter here when they were persecuted to near extinction in Iran around seventh century AD.

Opposition has charged the government of vote bank politics as they feel BJP will garner votes of all such migrants who may get citizenship. This is possible but if one looks at the numbers, barring Assam, then this charge falls flat. On the contrary given the opposition to the bill coming from many parts of the nation, BJP is likely to lose more votes than it gains. Even in Assam where it is in power, chances are that it will lose if elections were held today. So it does appear as if the opposition is barking up the wrong tree.

Many past governments have discussed the need for such a bill from time to time. From Prime Minister Man Mohan Singh to current Bengal Chief Minister Mamta Banerjee, from party spokespersons of Congress to CPI (M), all have endorsed the need for such a bill. Irrefutable records exist in this regard. But today given the opposition’s main agenda, and perhaps the only one, of opposing BJP led government for everything and everything, they seem to have lost their objectivity. This has contributed, in no mean way, to the protests and agitations that the nation is witnessing today.

Any demand for a universal bill for migrants from all nations and all religions too seems to be rather short sighted and motivated to fan communal passions. Governments bring in laws to fulfil specific needs that may not be applicable universally or for all times to come. This should be seen as one such law. Imagine if it was a universal law. Would that not open a Pandora’s Box? Should any government dilute its citizenship rules for all migrants for all times to come without making any distinction about who they are, where they come from or what their motives are for seeking Indian citizenship? Surely no government will be so naïve so as to give an easy route to every migrant for all times to come. Currently there was a limited need that the government, in its wisdom, wanted to address. Nothing stops governments in future to do the same if a genuine need arises. It could be Tamils from Sri Lanka or Buddhists from Tibet or even Rohingyas from Myanmar.

The bill is seen discriminatory by opposition and pseudo liberals mainly because Muslims migrants have been excluded. As is their want, opposition is purposely portraying this as if Indian Muslim citizens have been discriminated. It may be pertinent to call a spade a spade here. Would India, or for that matter any nation in the world, open its door for Muslim migrants from nations like Pakistan, Bangladesh or Afghanistan? Individual deserving cases are always welcome but will any nation want a mass migration of Muslim population from such nations? Is India not already battling the Rohingya Muslim problem? Given the rise of radical Islam in most Muslim countries, would India like hundreds of thousand of migrants from such nations to come in with an agenda to corrupt Indian Muslims, who to their credit, have remained fairly immune to such radicalisation till now? It is time for all those who seem to have lost their objectivity to get real.

This is not to say as if what the government has done is flawless. It may have been more prudent to read into the implications of this bill before passing it in the parliament. The concerns of North East states and CAB’s conflict with NRC should have been addressed first. There is even a question mark on the timing of the bill. Given the critical state of things in the state of Jammu & Kashmir today, perhaps the government could have chosen a better time for its introduction and implementation. It would have made no difference if the bill had come up in the parliament after another six months and with a little more ground work towards its acceptability. But the need of such a bill cannot be disputed.