The Ghosts of Time wander-

The spirits, the Valkyries….

And! Then there are….

The things of present….

Lounging across the pavilions…

Arrested ‘here’ are its light and its aroma!

Hauz Khas! The pearl of eternity in the oyster of time! A ruby of Delhi Sultanate! Here every stone comes alive like a fairy tale. The name Hauz Khas implies a water tank; however the entire complex houses a madarasa, six pavilions, a small mosque and the main tomb. It’s a bustling urban center in the south of Delhi, interspersed with the rural vignette. The place is lush green quite unlike the murky grays and putrefying umber(s) of the rest of the city. Before you pave your way into the complex, you’d have to bustle along the busy streets, thumping on the beat of romantic English songs and on-road endorsements. As soon as you step inside, a whole new vista opens up before you and you stand in awe, mesmerised by the architecture dating back to the 14th -16th  century. 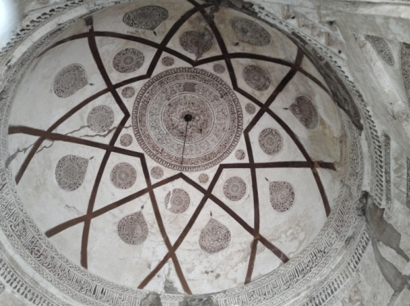 A sneak-peek into the Tughlaq’s tomb 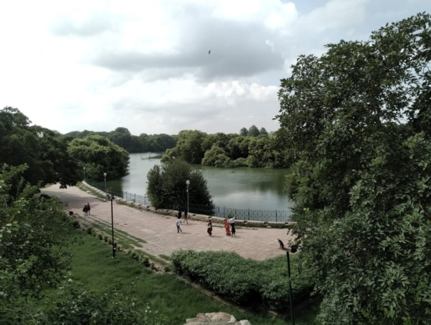 The panorama of the lettuce gardens, the cinnamon fort and the olive lake is a soothing salad for our ‘rich jumbo appetites’.  Its ornate domes and hallways whisper aloud of the worlds that exist beyond the time and space. Its mildewed walls emit a musty odour, whimpering of a shy history ‘neath a ‘black cottony veil’ 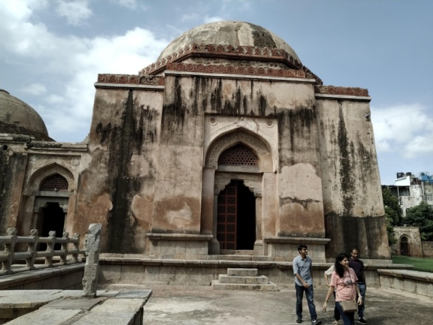 But Alas! The placid charm of Hauz Khas is for our queen bees and their paramours who choose the precincts for Ti-Amo(s)…..tense mollycoddling and dolce miaaaa(s)…..in that sequence….and not to forget the patrolling watchmen who (un)watch all of this. Along the shadowy sidewalls and buttresses, you may either spot a colorful couple or the nefarious black and white mold and sometimes both, enjoying the sweet sip of bitter reality. However, love is blind like our Lady of Justice and hence advertises its name on the walls so that the people can see it as she etched it on power zero. If you pay a visit for educational reasons, you would learn more about who loves whom than the great Tughlaq who had it built back then. Before you give up hope, your eyeballs would gauge dingy prisons, but Alas! the universal truth….Love has no bars and it’s blind as well…..except for the tomb…the eternal etchings of rita loves papita……shyam loves ghanshyam…..spare no corner!  We now know of cavemen, existing millennia ago as hunter gatherers, all thanks to the stuccos and wall paintings. A decade from now and you would find the researchers still arguing upon the phone number mentioned below rita loves papita and if they were really in love! 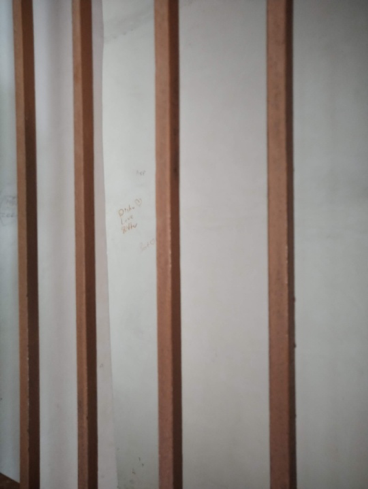 Even the prisons ain’t spared! 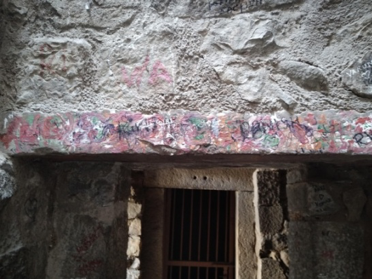 That perfect spot for sketching! 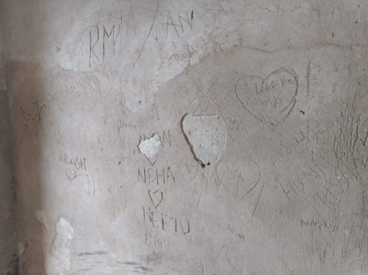 Such is the plight of our Heritage monuments! We wouldn’t mind to sit in the madarasa and have a discourse on love or lock ourselves in the prison for the veil it offers to our romantic pursuits! Little do we realize that these ‘writings on the wall’ appear nothing less than the terrible bruises and buzz of nothing more than the toons in love! It’s high time we, as educated citizens of this country, set ourselves free from the fetters of self-centeredness and pay as much heed to the world outside as to the shallow within. In the nutshell:

How brave a vermin is you?

The ‘Rumi’ in me cries aghast-

That the big cat is dead;

Now, you paint his home

In a nasty quill!