Manali: Residents of Buddhist dominated Zanskar valley of Ladakh are celebrating by the distance between Himachal and the valley being reduced by over 600km as they welcomed the first vehicle that arrived via new opened road after crossing over the Shinkula Pass.

The road between Darcha in Lahaul valley of Himachal and Padum in Zanskar that crosses over the 16,600ft high Shinkula (Shingo-la) is being laid for nearly 10 years now. Though the road is not safe for general traffic movement and is still under construction, three persons from Manali successfully reached Padum, headquarters of Zanskar, in their SUV. Watching vehicle coming into the valley from Shinkula pass, the three were given warm welcome by happy residents in many villages. The Border Roads Organization (BRO) officials, politicians and many organizations also congratulated the three for being the first to reach valley by this road.

“Initially we had planned to visit Shinkula and return back to Darcha and head to Kargil via Leh. We met with 70RCC commanding officer Deepak Bisht near the pass who encouraged us to give a try to this adventurous journey. We kept crossing nallahs, river and at some time no road. At one point near Lakhang, there was no road and the area was submerged in Zanskar river. BRO’s JE Keshav Kataria who asked us that he will cross our vehicle at any cost through the stretch helped us in making a road through river. We had no idea that we are the first people to reach Zanskar until we were told by BRO officials and locals,” one of three persons Pritam Thakur said.

Zanskar, the southern part of Ladakh in Kargil district, is reachable by the only road via Kargil. With a population of about 15,000, the people of Zanskar have same culture and religion that of people of Lahaul valley of Himachal. Most of the children from the valley study in Kullu. Residents buy ration and other essential items from Lahaul or Kullu and ferry it with help of mules and horses. The only connecting road to Zanskar headquarter Padum from Manali is over 910km and takes three to four days of travel time. The new road via Shinkula is just 273km, about 630km less than the traditional route via Kargil and Pensi-la.

“Our hard time has ended. I can not explain how happy people are. We can now go to Himachal to buy essentials and return back home the next day. As your vehicle from Manali has reached here, others will also dare to ply the road and BRO will keep maintaining it,” said Lobsang Tamba of Purne village who runs a homestay here. He added that earlier a few vehicles had attempted to drive on the route but could not cross the Lakhang section.

Some stretches of the road are in very bad condition are require serious maintenance. 70 Road Construction Company (RCC) of BRO maintains the road in south part of Shinkula pass while 126 RCC takes care of rest of the stretch. Nearly 3km stretch of the road at Lakhang was disputed for years and none of the company was maintaining it and is in worse condition. Finally, both the RCCs are building the road on war footing. 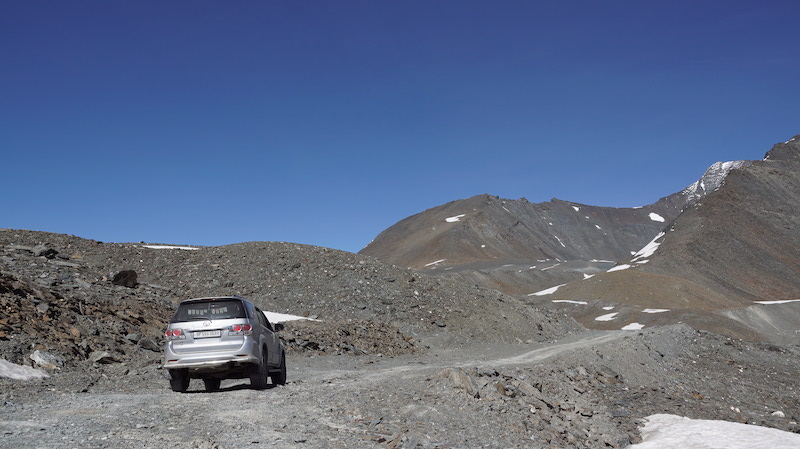 “We are extremely happy that our Ladakh has been made a union territory. Connecting us with Himachal with shortest possible distance is another happy news for us. We need not to go to Kargil or Srinagar for shopping. Opening of this road will bring prosperity to the valley,” Tundup Angdus, a prominent personality of Padum, said while welcoming the vehicle in the headquarters of Zanskar valley.

After hearing the news about arrival of the vehicle after traversing Shinkula pass, Rigzin Dawa and Tashi Langzom, the King and queen of Zanskar, gave a traditional welcome to the three at Zangla palace. Rigzin said opening of this road will end the hardship of the people of dozens of villages of Zanskar. He said Zanskar is vast and is home to a large number of ancient monasteries which would be easily accessible to the tourists. “Our new generation will definitely have a good time. They will have a comparatively comfortable life. This road will generate livelihood options for our people. The road has connected many remote villages,” he added.

As Manali-Leh highway passes through four high mountain passes and remains blocked in winters for seven months, BRO was looking for another option to keep Ladakh connected round the year. After Rohtang tunnel, BRO was planning to construct another tunnel below Shinkula pass to make Manali-Padum road all-weather. Meanwhile, BRO is building Padum-Nimmu road on war-footing. This road will connect with Leh-Srinagar highway at Nimmu, 40km beyond Leh towards Kargil. When complete, Kargil and Leh will be reachable easily and faster by both Indian Army and civilians.

38 Border Road Task Force (BRTF) commander Colonel Uma Shankar said the three persons have registered themselves in record books by becoming first to reach Zanskar on the vehicle by this route. “We are widening the Darcha-Shinkula road. The black topping of the road is also continuing. People can soon enjoy a smooth and scenic ride to Shinkula,” he said.

126 RCC second in-charge at Zanskar, Ashish Ranjan, congratulated the three and said Padum-Shinkula and Padum-Nimmu road works are continuing at multiple stages. “A large portion of the road has been double-laned and black-topped. We have informed the seniors that Shinkula is now connected with Padum by the road.”