Jagat Prakash Nadda, who had entered into politics as an ABVP activist, the appointment as BJP Working President marks a meteoric rise of a man who was known for his organisational abilities.

Jagat Prakash Nadda, the former union health minister, has been appointed as the Working President of the Bharatiya Janata Party. The decision was taken in a BJP parliamentary Board meeting which was chaired by Prime Minister Shri Narendra Modi at New Delhi today.

JP Nadda’s appointment comes days after the BJP had announced that current BJP chief Amit Shah will continue in the position for now.

In his felicitation message, Chief Minister Jai Ram Thakur said that appointment of JP Nadda was an honour for Himachal Pradesh and it’s people. He expressed hope that the BJP would emerge more strong under his leadership.

For Jagat Prakash Nadda, who had entered into politics as an ABVP activist, the appointment as BJP Working President on Monday marks a meteoric rise of a man who was known for his organisational abilities.

Under his leadership in 1984, the ABVP for the first time defeated the Students Federation of India (SFI) in the Himachal Pradesh University and he went to become the student’s union president.

The former minister was appointed as the president of the BJP’s youth wing — the Bharatiya Janata Yuva Morcha (BJYM) in 1991.

Born in Patna to a Brahmin family from Himachal Pradesh, Nadda was first elected to the Himachal Pradesh Legislative Assembly in 1993. He was subsequently re-elected in 1998 and then in 2007.

After Prem Kumar Dhumal formed a government in 2007, he inducted Nadda in his Cabinet, as a minister responsible for Forest, Environment, Science, and Technology, from 2008 to 2010.

Nadda did not seek re-election to the Legislative Assembly in 2012, and instead got elected to the Rajya Sabha, the Upper House of Parliament. In 2014, during a Cabinet reshuffle, Prime Minister Narendra Modi made him the Union Minister of Health. 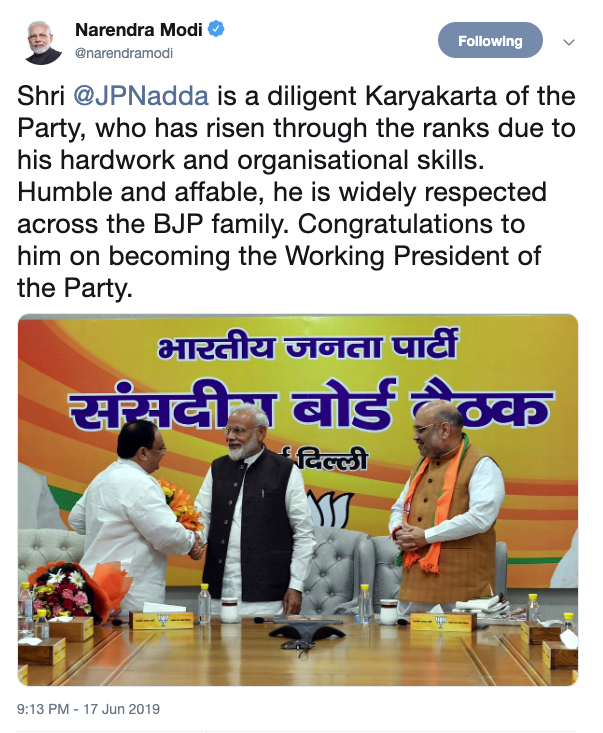 The choice of 59-year-old Nadda, who was the Health Minister in the first Modi government, has come as a bit of surprise as the party had indicated last week that it could take a call on the issue after the membership drive and organisational elections in the state will be over after about six months.

He was made a member of the BJP Parliamentary Board which is the highest decision-making body of the party and also a member of the Central Election Committee that takes final decision for both the Lok Sabha and the Assembly polls.

Nadda was also chosen by Shah to steer BJP in the 2019 general elections in UP where he worked in close coordination with former Gujarat BJP minister Gordhan Zadaphia, and secured more than 50 per cent of votes and 64 seats for the NDA.