The size of fisheries and aquaculture in India is humungous.  We have 3.5 million marine fisher population and 10.5 million persons engaged in inland fishery and fish farming.

India is the second biggest producer of fish in the world and has been holding steady for quite a few years now, a fact not too widely known.  Still lesser known is the fact that at an approximate value of INR 47,000 crores fish is the single largest agricultural export of India.  Fisheries Sector over the past five years or so has been quietly, but assuredly, growing at a consistent annual rate ranging between 6.0 to 10.0% compared to the relatively modest annual growth of the crop sector at around 2.5%.  In fact, 5.23% of Agriculture GVA is the contribution of Fisheries.  The performance of the sector in India is all the more impressive when one compares it with the average growth of the fisheries sector all over the world.

Being a primary livelihood activity for a large number of communities, the importance of the fisheries sector towards achieving the national goal of doubling farmers’ income could hardly be overstated.  But what must be stated outright emphatically is that across the globe, the sector faces formidable challenge of sustainability.  Fisheries resources and stocks face rapid and dangerous levels of depletion on account of multiple onslaughts.

The United Nations (UN) Food and Agriculture Organization’s (FAO) State of World Fisheries and Aquaculture (SOFIA) presents alarming information that must be addressed by policy makers.  According to SOFIA, robust scientific data and research suggests that nearly 90% global marine fish stocks have either been fully fished or over fished or depleted to an extent where recovery may not be biologically possible.  Global fish production would have to reach up to 196 million tonnes by the year 2025 from the present level of 171 million tonnes to meet the ever increasing demand of animal protein.  However, staring mankind in the face is an accelerated depletion of marine fish stocks which so far have been constituting more than 60% of global production.  How then does one, in such a dismal scenario, aim to spur growth?  The answer lies in fish farming or aquaculture, and it is here that India has a huge comparative advantage.

Indiaffsetting this huge size and numbers, however, is low productivity and meagre returns per fisher, per boat, per unit effort etc.  At the one end of the spectrum is Norway where on an average one fisherman / fish farmer produces / catches 250 kg fish per day, whereas the average catch per fisher per day in our country is 4/5 kg. 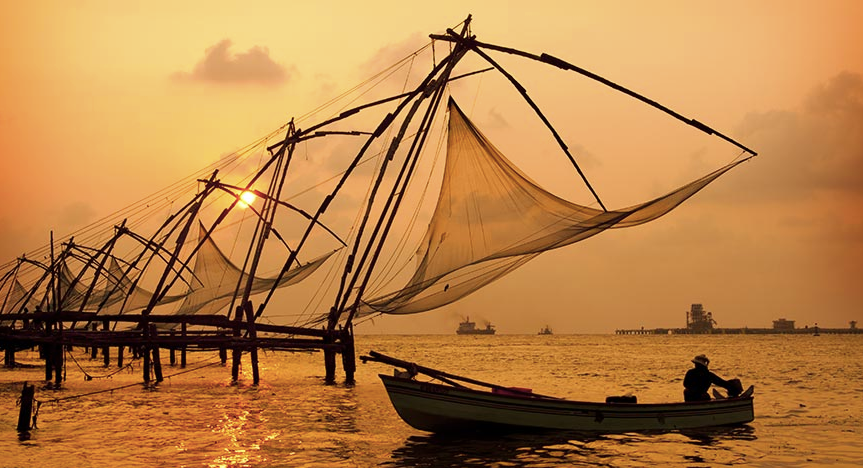 Marine capture fishery in our country is characterised by small scale fishermen operating traditional boats, a large number being non-motorized or operating on a basic outboard motor.  The capacity of these vessels is limited to operation in near shore waters.  High value species such as Tunas are found in oceanic waters which are beyond the capacity of these vessels.  A sustainable harness of these resources will bring immense benefits to fisher communities.  We are faced with a unique situation wherein on the one hand the near shore coastal waters are highly over fished resulting in reduced catches, while on the other there is abundant high value fish stock available in our exclusive economic zone and the deep sea.  The new National Policy on Marine Fisheries aims to provide this very capacity to fishermen by introduction of deep sea fishing vessels and further assisting them in converting their present vessels and gears to sustainably target these deep sea stocks.

While we need to be cautious from falling prey to the temptation of introducing large scale industrial fishing given the sustainability challenges and considering that it is a primary livelihood activity for a large number of communities and individuals, our policies and interventions must be directed towards enhanced productivity, better returns and increased incomes.

The Blue Revolution scheme launched a few years back seeks to make fishery and aquaculture a viable and rewarding vocation that spurs economic growth and enhances family incomes.  More importantly, the scheme through its moniker, structure and implementation has given focussed attention to this important livelihood and economic activity.

To achieve the objectives, the Blue Revolution adopted a broad two pronged strategy.  The first is sustainable capture fishing to harness marine and inland water resources; and second expanding the horizon of fish farming through increased area coverage, enhanced productivity, species diversification and better market returns.  Many interventions target production oriented activities and optimum utilization of available resources.  The scheme envisages intensive fish farming through increased stocking of seed, better feed quality and diversification of species.  The introduction of innovative practices such as re-circulatory aquaculture system, aim to realize the goal of more crop per drop.  As a result, productivity of fresh water fish farming has progressed to more than 3 metric tonnes per hectare from the previous 2.5 tonnes per hectare; while for brackish water coastal aquaculture it is at a high of 10 to 12 metric tonnes per hectare – a sharp increase from the previous 2 to 4 tonnes.  Further an additional 30,000 hectare area has been added to fish farming.  Investment in a large number of hatcheries is meeting the ever increasing demand for good quality fish seed.  Expansion of aquaculture would exponentially increase this demand.  Future strategy would prioritise seed production to the level of self-sufficiency.

The introduction of cage culture in reservoirs and other open water bodies is pushing output.  Nearly 8000 cages have been installed and each cage at a modest of yield 3 tonnes fish translates into more than thousand per cent increase in productivity.  An added reward of this new practice is freedom to the fishermen from the drudgery and risk of traversing dangerous rivers and restricted reservoirs in search of fish.  Regular stocking of reservoirs and other water bodies has resulted in marked increase in fish catch, providing better returns to traditional fisher communities.  Furthermore, open sea cage culture is at a pilot stage and initial trials are promising.  This may prove another game changer and lead to a fundamental shift in the fishing practices prevalent across the country.

The investment of INR 3,000 crores in Blue Revolution is being supplemented through a separate fund of INR 7,523 crore called Fisheries and Aquaculture Infrastructure Development Fund to meet the requirement of capital investment in the sector.  Creation and strengthening infrastructure facilities in marine and inland fisheries; aquaculture and post harvest activities should receive a major boost now.  It is hoped that these combined strategies and efforts would result in a progressive growth both in production and across the entire fisheries value chain.  The country should be producing more than 15 million tonnes fish by the end of the year 2019 and become a hub for sustainable fish production for times to come.