Manali: Even after so many years and increasing number of accidents every year, barley thrashing practice in middle of road by the villagers on the left bank of River Beas in upper Kullu valley goes on uninterrupted under the very nose of police and traffic regulators.

As summer tourist traffic increases, the district administration has done precious little to educate the villagers against the practice that endangers lives of motorists.

A novel way adopted by the villagers of upper Kullu valley to thrash barley has led to a number of accidents involving vehicles of tourists as well as locals.

Threshing is the process of loosening the edible part of (or other crop) from the husks and straw to which it is attached. It is the step in grain preparation after reaping and before winnowing, which separates the grain from the Although threshing does not remove the bran from the grain.

Threshing may be done by beating the grain using a Another traditional method of threshing is to make oxen walk in circles on the grain on a hard surface. A modern version of this in some areas is to spread the grain on the surface of a country road so the grain may be threshed by the wheels of passing vehicles.

As hand threshing was laborious, with a of wheat taking about an hour. In the late 18th century, before threshing was mechanised, about one-quarter of agricultural labor was devoted to it.

As the harvesting of barley ends in the valley, some villagers find it convenient to thrash the grain under wheels of the moving traffic without bothering to care the accidents and injury to humans it could cause. 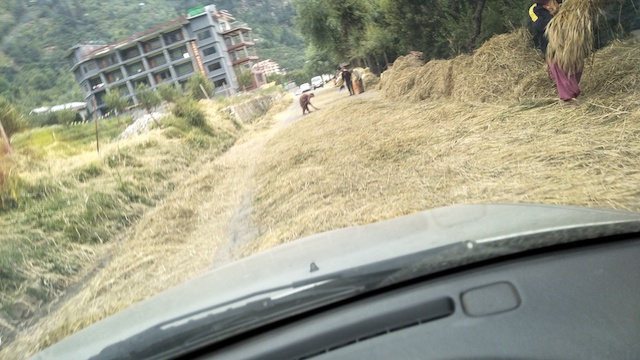 The villager’s spread the barley on the center of the road and let the passing vehicles do the job of thrashing the husk from the barley, without bothering that in case the driver applies emergency breaks the vehicle could skid and lead to serious a accident in which someone could lose his life. 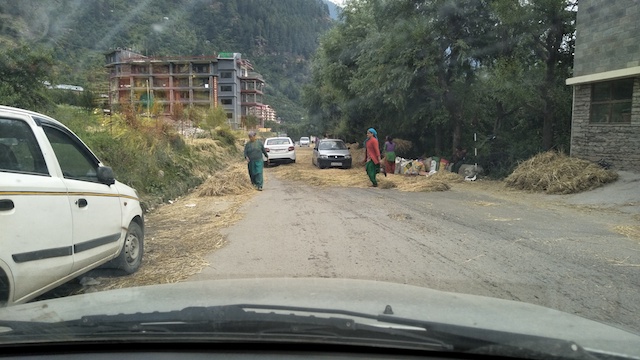 Rajesh Sharma from Jagatsukh village while speaking to Hill Post said, “well I have mixed reactions towards this. Though I agree its a problem for two wheelers since nobody wears a helmet in the Kullu valley, its only practiced in a very small area on the left bank road. This also serves a speed breaker for the cars rushing in that thin road towards Jagatsukh and for tourists its a great delight to see this indigenous practice. Personally i have always enjoyed people doing this work on the roads though I agree it can be a big nuisance for two wheelers especially of the speeding kinds.”

Raman Gadsanghi SDM Manali while speaking to Hill Post revealed that the administration has been educating the villagers from time to time to use mechanical thrashers instead of using state roads for the purpose. He added that village pardhans are given instruction to educate the village so that they give this practice.

He said that this issue would be taken on the panchayat level to make the ground work effective.