I've decided to do something to atone for my sins of omission, to turn over a new leaf as it were, somewhat like Adam when he saw Eve dressed in skimpy fronds.

Its’s been a difficult last few years for me. There prevails a certain restlessness and a subterranean sense of guilt. The reason? – a feeling that I’ve not done enough to help in ushering in the “acche din” or in making India the superpower which our PM divines is within our grasp. I’ve not sexually molested any woman (though I did compliment my sister-in-law on the beautiful sari she was wearing, which Mrs. Vrinda Grover would probably consider a border line case), I’ve not beaten up anyone for carrying seekh kababs in his car, I’ve failed to warn any Dalit against riding on a horse, I’ve not cheated in any exam (though I did briefly consider taking the LLB exam from the same obliging University as Delhi’s ex-Law Minister), I’ve not defrauded any bank or floated a real estate company like Unitech or Amrapali, I haven’t jumped any look-out notices, I don’t have any NPAs (well. none that effects the economy in any way!), I haven’t painted my Mashobra cottage in any shade of saffron, I haven’t leaked anybody’s Aadhaar data on line, and I haven’t indulged in love jihad (primarily because I cannot locate a woman stupid enough to run off with me). I could go on with my misdemeanors, but I’m sure you get the point – I’ve miserably failed to take any of the steps that will propel us to a leadership role in the world. I’ve let down our visionary Prime Minister, hence the hang dog look and the contrite feeling. So I’ve decided to do something to atone for my sins of omission, to turn over a new leaf as it were, somewhat like Adam when he saw Eve dressed in skimpy fronds.

I’ve decided to go on a fast – not on a fast unto death, partly because Swati Mahiwal of AAP has already monopolised this at Rajghat these days, and partly because this may be treated as suicide, jeopardising both my life insurance policy and the wife’s family pension. But even after eschewing this more extreme form of masochism, I soon discovered that there were other hurdles. First, the venue of the fast. Nowadays one can only fast at the Ramlila grounds in Delhi, as per the orders of the NGT – makes perfect sense, if you ask me, to restrict fasting to a venue named after a Hindu god since fasting is a peculiarly Hindu concept. Fasting at the Jama Masjid, for example, would be impossible what with the fragrance of galauti kababs wafting in from all the surrounding lanes. So I contacted the MCD who informed me that the RL grounds were booked solid till the 2019 elections! It appears that every politician, NGO, JNU students’ union, farmers’ union, transgender association and assorted crackpot wants to go on a fast nowadays. I learn that some larger-than-life women MPs and Ministers, known for their feisty press conferences, raucous laughter and bringing back bodies of dead Indians from abroad are also planning to join the bandwagon: they have figured out that rather than fasting in the seclusion of their homes to shed some flab, its better to do so at RLG where they can also get some badly needed free TV time. Talk of killing two birds with one stone – though in this case it will be at least four stones, which is what each of these magnificent ladies is hoping to shed, in the national interest, of course. I may, therefore, have to go to the Yamuna flood plains to fast, but I have a dirty feeling that Shri Shri Ravi Shankar might have beaten me to it – he just can’t tear himself away from it. 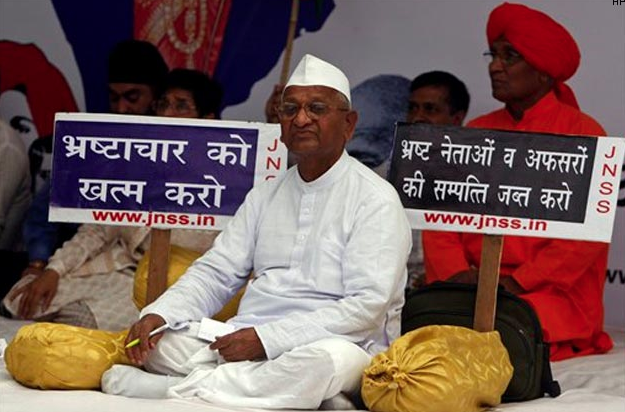 My next discovery was that fasting is no longer the simple exercise in abstinence that it was in Mahatma Gandhi’s time. Back then its purpose was to commune with one’s soul, or, better still, with God; nowadays both eyes are firmly fixed on the voter and the third on the nearest EVM. There are now a number of business models to choose from, depending on the objective of the fastee (“fastee” may be the wrong word; the correct term may be “faster” but that sounds too much like the fastener in Donald Trump’s zip, and since it is difficult to associate that with any form of abstinence I’ll stick with “fastee”. thank you). For the benefit of the reader who is entertaining similar thoughts here are four of the better known models of fasting which are trending on Fakebook:
The BJP model: resorted to when you have broken all the rules in the book (and in Parliament), cocked a snook at the courts, and firmly believe in the Nixonian doctrine: “When you have them by the balls their hearts and minds will follow.” Its also meant to convey to the opposition the message that what you can do we can do better. A bit difficult for me to emulate because [a] I do not have a 56 inch chest, [2] in today’s dispensation I am the “ballee” not the “baller” in the Nixon quote, [c] I do not have access to expensive Taiwanese mushrooms to quickly recover my strength before the next assault on the Constitution.

The Congress model: in this version the emphasis is not on the fast itself but on the chhole bhature that are served prior to it. The objective is not important – when you have an obsession for tilting at windmills it doesn’t matter which windmill you choose. In stark contrast to the BJP model, the Congressmen prefer to keep the cameras away lest they capture their bite rather than the byte, which defeats the whole purpose of the gastric exercise. Therefore not for me – I wish to atone for my sins in 4D and on Whatsapp, Instagram, Hike for that total cathartic feeling.

The DMK model. Now this is the one I like best, though it’s not recommended for Mr. Nitish Kumar’s prohibitionist Bihar. Devised by a nutritionist, it compensates for the calories you lose on the dosas by providing them via the booze. We all saw it playing out sometime back on prime time TV, the bottles of Cauvery water mixed with the nectar from the glens of Scotland – now we know why they want more water! This model is not for me, however, I only drink on weekends.

The Anna Hazare fast. This comes closest to the Mahatma’s model, and that’s why it appears to have gone out of fashion. Plus, all the original adherents of this style have all become Ministers or Governors and have no reason to fast any more. All except Mr. Hazare himself, a poor, lonely old man whose fast the last time had set Delhi on fire. He had successfully appealed to the conscience of a nation and a government four years earlier. Sadly, these appeals work no longer – the govt’s conscience has been replaced by an EVM, and the nation’s by Twitter. Certainly not a model to follow in these unscrupulous and opportunistic times.

So there you have it – which model should I choose? Confronted with this Hobson’s choice I’ve decided to ditch my original ideals and follow the sane admission of John Maynard Keynes: “when the facts change I change my mind.” In other words, I’ve decided to follow the Arvind Kejriwal model of fasting which is simple and effective. It consists of an announcement of the fast on prime time TV, to be followed a day before the event by a bulletin stating that the fast has been cancelled on medical advice! How’s that for having your Kate and Edith too? More promiscuous than abstemious, I should think, but it works. Now I have only one remaining problem – how do I get an appointment with Mr. Kejriwal’s doctor? I learn he’s thinking of going on a fast himself – he wants a Rajya Sabha ticket, just as his CA did. Here’s how the local wag in Patparganj put it:

Kejri played a little game
Known as five year cricket;
Who gives a damn about the runs
When you can get a ticket?

Having exorcised my guilty conscience I plan instead to go to Kaka di Hatti for their nan and rogan josh – I can always fast the day Neerja decides to try her hand at cooking.