Islamabad(IANS) The toll in four deadly blasts yesterday in Pakistan — three in Quetta city and one in northwest Swat district — has risen to 116. At least 235 other people were injured in the bombings by extremist Sunni Muslim group Lashkar-e-Jhangvi, media reports said Friday. 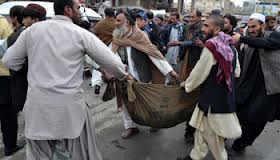 The first blast in Quetta, capital of the southwest Balochistan province bordering Afghanistan and Iran, took place around 3.50 p.m.. The bomb hit a check-post of the paramilitary force Frontier Corps in Bacha Khan area, killing at least 12 including a corps member and injuring 50.

The bomb was fixed under a chassis of a vehicle parked nearby. An estimated 25 kg of explosives were used in the bomb, bomb disposal squad officers told Xinhua.

The blast left a two-feet-deep and eight-feet-wide crater on the ground.

As many as 13 vehicles were destroyed in the blast. The explosion also caused damage to nearby shops, offices and homes.

About two hours later, a blast hit a preaching centre in Mingora town of Swat in northwest Khyber Pakhtunkhwa province, 115 km from Islamabad.

Hundreds of people had gathered inside the preaching centre for Friday prayers when the explosion went off, killing at least 22 people and injuring 65 others.

Initial reports said it was a gas cylinder blast, but officials later said a bomb was planted in the basement of the centre.

Bomb disposal squad officers said an estimated six to seven kg of explosives were used by the suicide bomber.

As police, rescuers and mediapersons rushed to the site, another bomb fixed to a vehicle parked nearby went off.

Police official Mir Zubair told Xinhua that 81 people were killed and 121 wounded in the twin bombings.

Among those killed in the twin blasts, there were nine policemen, 25 rescue workers and two mediapersons.

An estimated 100 kg of explosives were used in the second blast.

Lashkar-e-Jhangvi, an extremist Sunni Muslim group banned by the government, has claimed responsibility for the twin blasts.

The provincial government of Balochistan has announced a three-day mourning for the victims and a compensation of Rs.2 million ($20,300) each for the killed policemen and Rs.1 million ($10,150) each for the other people who lost their lives.
Image Credits: english.news.cn