The potential of street food in garnering votes is immense......

The ruling party at the Centre has some distinguished professionals: historians who rewrite history without any evidence, anthropologists who repudiate established scientific theories such as Darwinism because there were no eye witnesses to the event, economists who equate unemployment with self-employment, medical experts who ascribe diseases to one’s karma and past sins. It should, therefore, surprise no one that the BJP’s grise eminence – Mr. Amit Shah, no less – has now propounded a new theory, viz. that the humble pakoda on your street corner will propel the country on a growth path that will overtake China in a few years. Street food has now entered the hallowed realms of street politics. But the trend is not new.

The potential of street food in garnering votes was first discovered by Mr. Bal Thackre in the 80’s. At the time Bombay was over-run by Udippi eateries serving typical, cheap south Indian fare. The Shiv Sena decided that this was depriving the Marathi manoos of employment opportunities and, in addition to beating up the Udippi types, launched their own flagship street food – the Vada Pav. It was an instant success and only Mr. Vir Sanghvi can tell us how many variations of the ubiquitous pav now exist. Combining religion with cuisine, the Shiv Sena launched a new version of the humble pav in 2008 – the Shiv Vada Pav – so that we can now indulge in worship and gluttony at the same time. 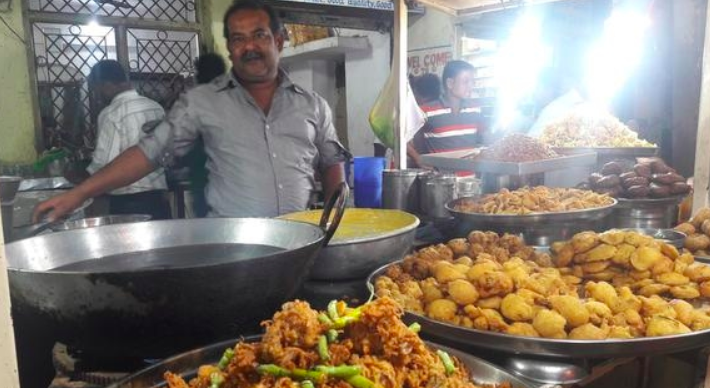 The idea then lay dormant for some time, till Mr. Modi himself resurrected it in 2014, with able assistance from Mr. Manishankar Aiyar who manages to drop pearls even when both his feet are firmly planted in his mouth. This time it was the even more humble “chai”, a beverage whose capacity for getting the bowels to move in the mornings has now been dwarfed by its potential to get votes. The chai is the staple of every Indian; by identifying himself with it Mr. Modi identified himself with every Indian (except those who drink gimlets or vodka at the Gymkhana club, but they’re usually too drunk to find their voting booth in any case) and swept the election. He has made the chai his own and therefore the opposition has now stopped looking at the tea leaves to find out what the future holds for them.

When the chai started to cool off it was the turn of beef and kebabs, both of which were seized in huge quantities and sent off for “forensic” examination. The samples are still lying with various veterinarians who can’t figure whether they are buffalo, oxe, cow or nilgai – in the end it will all turn out to be a lot of bull. But it enabled Mr. Yogi Adityanath, riding on the back of the cow, to win handsomely in UP. Then someone in Nagpur must have read one of our Census reports and discovered that 70% of Indians are non-vegetarians, and that a party with a 31% vote share couldn’t subsist indefinitely on milk, ghee and cow urine, notwithstanding Baba Ramdev’s exhortations. So the kebabs are making a come-back and the aroma of tunda kebabs once again greets you as you drive into Lucknow. Till the next elections in UP.

By this time the Opposition had had enough of the BJP hogging the national menu and decided to introduce some street food into their politics too. Suddenly the headlines were full of the “Taiwanese mushroom” costing Rs. 80000 per kg. The Congress alleged that Mr. Modi preferred it to the “Fair and Lovely” face cream, consumed vast quantities of it, and as a result his complexion had become lighter. To me he appears the same shade of saffron but he does occasionally do the chameleon act, especially when he is abroad.

Enter the omni-present “paneer” in the form of the now on-now off Chief Minister (now Dy. Chief Minister) of Tamil Nadu, Mr. O Paneer Selvam. Now the paneer is a neutral product which can assume the flavour of any accompanying ingredient, and this is what OPS has been trying to do, cosying up with anyone who will keep him in the gravy. However, he now has two more flavours to contend with – Rajnikanth and Kamal Hasan – and it remains to be seen which seasoning will prevail. He is playing his cards close to his chest and not saying much, or is seen mumbling all the time, which perhaps is why he is known as Mutter Paneer.

Next was the turn of Bengal and Odisha, their bone of contention being the magnificent “rossogolla”, that delicious, sinful, sugary sphere that can take you straight to the “houris” without having to don a suicide vest. Both states claimed ownership of the legacy of the rossogolla and sought its IPR ( Intellectual Property Right) under the GI ( Geographical Indicator) section. It was a close call amid all the demonstrations, protests and marches by the bhadrolok of both states but Bengal has finally won – what Mamta wants Mamta gets. However, at times I do wonder what Bengal and Odisha are fighting over, considering that the market for rossogollas belongs to neither of them – it has been captured by Haldiram and Bikanerwala.

Mr. Amit Shah’s “pakoda”, therefore, is only the latest entrant into the sphere of street food politics. We may dispute its accuracy as a metaphor for robust employment, and we may wonder why it has been chosen above the samosa or papri-chhat, but we should now be prepared for more such metaphors. I wonder what’s coming next ? The humble “khichdi” would be an accurate metaphor for our chaotic Opposition, since it’s impossible to figure out its various constituents. Scrambled eggs would do nicely for Delhi, what with its incomprehensible jumble of authorities, policies and power centres. That rich, sinful, laxative imbued sweet – the “rabri”- would be the perfect metaphor for Ease of Doing Business – “All Clearances At One Sitting.” And how about the “Jalebi” with its swirls, twirls and twists as the metaphor for Mr. Jaitley’s convoluted taxation policies ? We may well be at the cusp of an idiomatic revolution in Indian politics. The possibilities are limitless. As Vijay Mallya said to his bank manager just before his airline (and the bank) crashed to the ground: The sky is the limit, bhai !