Bijali Mahadev temple is equally famous among devotees and tourists, not just because of its sanctity but also because of the wide panoramic views from the vantage point. 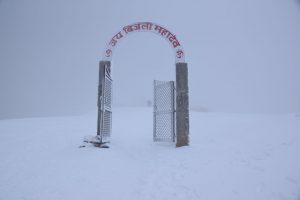 Kullu: The revered Shri Bijali Mahadev deity, popular among devotees due to the Shiva temple located at the head of Kharahal valley at an commanding altitude of 2450 metre, has had many pilgrims visit the shrine for Mahashivratri, a holy celebratory and popular festival of the valley, despite an intense cold wave sweeping the region with their being snow around the hill top temple complex.

The temple is equally famous among devotees and tourists, not just because of its sanctity but also because of the wide panoramic views from the vantage point.

Though the temple witnesses a large number of devotees and tourists around the year but for the religious Hindu festival of Mahashivratri and holy Shavan month (which falls from mid July to mid August as per Hindu calender) are times when the number of visitors increases surges, no matter what the weather conditions are.

On the occasion of this Mahashivratri festival hundreds of devotees paid their obeisance here despite 6” inch snow deposition. 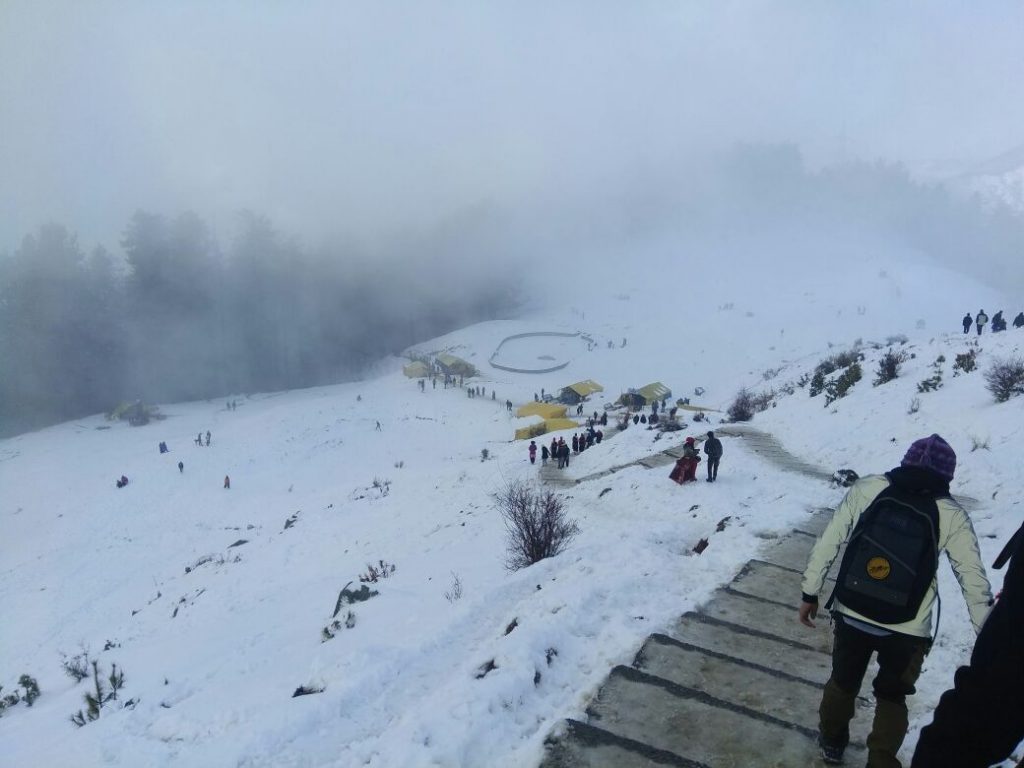 Folklore history about the temple

Narender Naag, Kardar (care taker) of temple, shed some light about the uniqueness and history of the temple as passed on  orally from one generation of priest to another. Speaking to Hill Post the Narender said, ”it is believed that a demon snake named Kulant tried to destroy the entire valley by obstructing the flow of river Beas flow with his body. Shiva, the lord of the Himalayas, came to the rescue and destroyed the demon to save the valley and its people from being killed. The dead body of that snake turned into into a huge mount, today known as Kharahal valley and the residents founded a shrine at the head of the valley in reverence of Lord Shiva for having saved the valley.”

As a care taker of the temple, he said ”As per rituals, every year the temple is closed for three months from Magh (next day from Lohari festival in January) to Nav Samvat (Navratre festival starts in March or April) mean new year as per Hindu calender. During this period the temple is only opened for devotees on the occasion of Mahashivratri.” 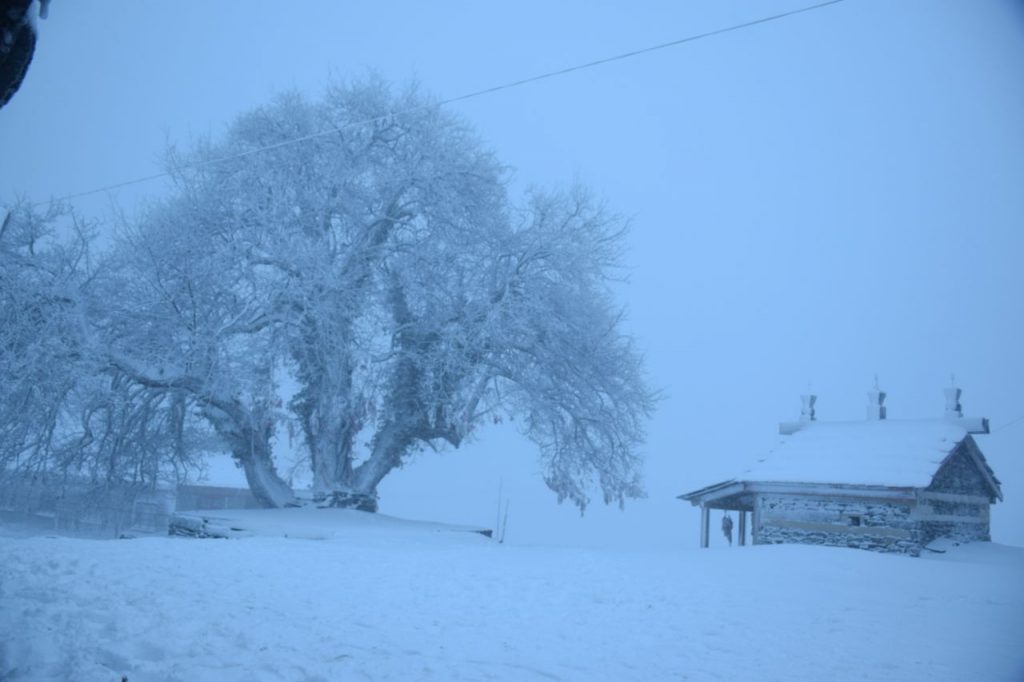 Lightning (‘Bijali’ in Hindi and Kullvi dialect) is said to strike the Shivling of Mahadev temple, once in every twelve years, leaving it shattered in many pieces. The resident priest then joins all broken parts again with butter collected from the nearby villages. Dr. Ramesh Thakur, who is well versed with the local deity culture told this correspondent, ”Initially the incidence of lightening striking the holy Shivaling used to occur once in twelve years, which I did hear from my father and even did witness it once. But no such lightening strike has taken place for the last two decades which can’t be taken as a good sign. May be climate change or global warming are the reasons for it. If we look it from religious point of view, mighty Shiva, through his holy oracle, has repeatedly emphasised about the purity of the mountains in and around the temple. Modernisation and development are good but the need to abide by natural and traditional religious beliefs for the man and his environment.” 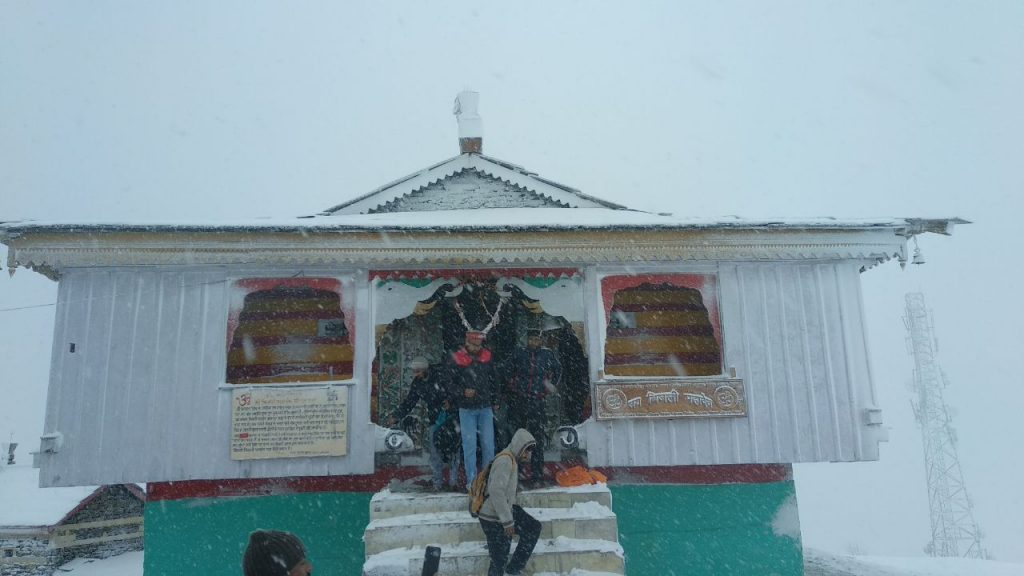 Arun Kamboj, a pilgrim visiting the temple said to Hill Post, ”The long dry spell this winter had everybody worried and devotees had been praying for rain and snow which has finally been answered for the occasion of Mahashivratri. Believers like me consider it to be the Lord bounty. I come to pay my obeisance here every Shivratri no matter what the weather conditions are.”

Forest minister Govind Singh Thakur, spoke to the media about development of the temple complex. He said, ”it is a very sacred temple but not easily accessible because of the difficult uphill trek required to reach it, especially for older people and children. We plan to install a ropeway that will enable both devotees and tourists to reach the Bijali Mahadev hill top more easily.”

Yunus Khan, the Deputy Commissioner (DC) of Kullu said, ”the administration is ready to extend any help needed to develop the area.”

Tarun Vimal, a councillor at Kullu municipality said, ”plans to install a ropeway to Bijali Mahadev temple is welcome but all development of the area needs to be done without hurting the people’s religious sentiments after all religious important of the place is most important.”