While addressing the gathering at Paddal stadium, the Chief Minister announced 20 percent increase in Nazarana of the local deities. He also announced two times increase in honorarium of ‘Bajantris’, the musicians accompanying the deities and 20 percent hike in ration quota. With two times rise in honorarium of Bajantris, the sum comes around Rs. 7,31,000 which was Rs. 3,64,000 in 2017.

He said that all the left-out deities would be registered phase-wise, for which the ‘Sarv Devta Committee’ will formulate the guidelines and thereafter examining each case will pass a resolution in the house unanimously and the committee will forward the case to the district administration for necessary action.

He said that the life of the people of the state revolves around the local Gods and Goddesses and the local deities were inseparable part of the people. He said we should perform all the religious ceremonies as per the traditional practice adding that the Shivratri festival gives a glimpse of ‘Dev and Manav Milan’ (the meeting of humans with deities). 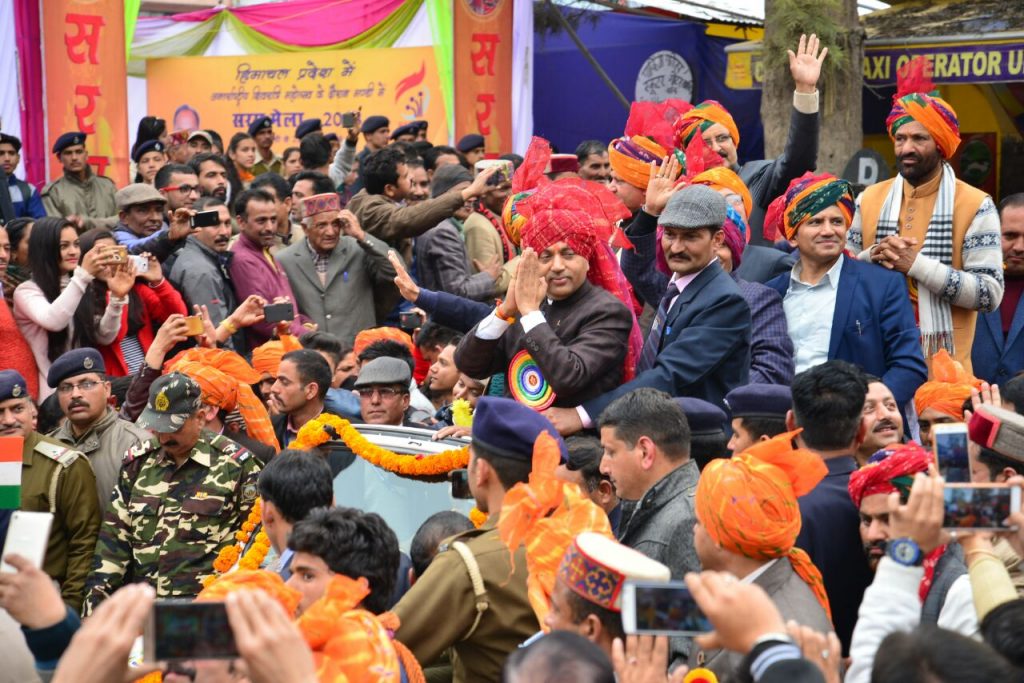 The Chief Minister also released a souvenir of the festival on the occasion.

He thanked the people of Mandi district for giving huge mandate to the BJP in Assembly elections. He said that he will ensure that he visits Mandi district once in month to meet the people and redress their grievances.

“I am happy to see all nine MLAs including an Independent who have gathered here for celebrating the festival with traditional fervour”, he said. He also congratulated the administration for organising the fair successfully.

Earlier, after paying obeisance at the famous Madho Rai temple the Chief Minister participated in the traditional ‘Jaleb’ (Shobha Yatra) of Shivratri fair which began from DC office to end in Paddal ground. Local deities along with the Chief deity Madho Rai led the procession. The Chief Minister was welcomed as per traditional customs. He was accompanied by IPH Minister, Mahendar Singh Thakur, MPP and Power Minister, Anil Sharma, Member of Parliament Ram Swaroop Sharma, local MLAs and others. The Chief Minister wished prosperity to the people of the State on the occasion and particularly to those of Mandi district.

The locals draped in their colourful attire thronged the procession carrying along the palanquins of the local deities and marched towards the Paddal Mela ground. A little less than two hundred Devtas participated in the ‘Jaleb’, the traditional Shobha Yatra, from almost all corners of the district.

Jai Ram Thakur announced channelisation of Sakodi rivulet on hospital-Rewalsar road at Mandi and directed for early completion of Dev Sadan, Mandi. He said that the government was looking for vacant open space for parking in Mandi town and soon will come with parking places to decongest traffic.

He said that Mandi would be connected with air services under UDAN scheme, (a regional connectivity scheme of Government of India) and the state government would take up the issue with the Union government besides direct flights from Chandigarh to Kullu, Kangra, Shimla and for tribal areas would be realised soon. He directed for looking for an open space for construction of another helipad in Mandi.

Deputy Commissioner Rugved Thakur, who is also the Chairman of Shivratri Mela committee, welcomed and honoured the Chief Minister on the occasion. He also briefed about the week-long fair and the activities to be undertaken. The Deputy Commissioner said that efforts had been made to showcase the art, culture and traditional customs of the district in series of functions. Later, the Chief Minister inaugurated the exhibitions at ‘Seri Manch’ set up by various government departments and NGO’s and evinced keen interest in Saras Mela.

Earlier, the Chief Minister listened to the grievances of the people at BBMB rest house in Sundernagar. Chairman, Bhakra Beas Management Board (BBMB) D.K. Sharma presented a cheque of Rs. 200000 as assistance for fire victims of Dahar village of Tehsil Balichowki in Mandi district.