Igniting ambitions to soar globally and build a reputation as an efficient public sector power company, it was on the challenging path of generating hydropower in the Himalayas that SJVN over 25 years ago picked for its Karam Bhoomi and ever since has stood steadfast in its path.

At its very birth on 24 May, 1988 SJVN (then known as Nathpa Jhakri Power Corporation – NJPC) took on itself the daunting task of constructing India’s largest hydropower project with a new run of the river design, something that was yet to be tested in fragile Himalayan geology. 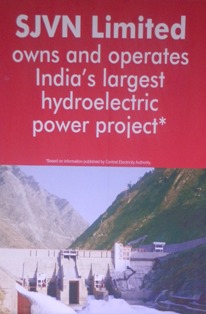 The 1500 MW ambitious Jhakri project on River Satluj had been on the drawing table since the early 1960s, the projects foundation stone had been laid by Prime Minister Rajiv Gandhi on 13th April, 1988, when NJPC, a joint venture public sector company between the Union Government and Government of Himachal Pradesh specially constituted to execute the project, stepped in.

In taming a fast flowing Himalayan river, piecing together innovative engineering after each massive rock fall and havoc ridden flash floods, boring a 27.4 kilometer headrace tunnel over geothermic and sheer zones and in excavating the country’s largest underground chamber, SJVN has matured by cutting its teeth in setting up India’s largest hydropower plant.

Commissioning of the mega Jhakri plant in May 2004 put the company in a peer group that had the ability and expertise to execute any hydropower project across any mountainous zone.

Laying out an ambitious 30,000 MW power generation capacity target by 2030, SJVN has commissioned all 6 turbines of the 412 MW capacity Rampur hydropower project.

The Rampur power plant happens to be one of India’s most environment friendly project as there was minimum displace of people, no dam or de-silting infrastructure was constructed and no land was inundated.

With an estimated hydropower potential of 150,000 MW waiting to be tapped in the Himalayan belt SJVN is prepared to take up the challenge as readies to head into new geographies and include the countries of Nepal and Bhutan.

Transcending national boundaries, this public sector company is slated to execute the 600 MW Kholangchu Project and the 570 MW Wangchu Project in Bhutan under a joint venture agreement with a Bhutanese government company. The foundation stone of the Bhutan project was laid on the maiden foreign tour of Prime Minister Narendra Modi in June 2014.

Other than the international footprint the company has acquired, several projects in the country are expected to take off as soon as they are cleared by regulatory bodies for execution. Detailed project reports for the 588 MW Luhri Project and 66 MW Dhaulasidh project in Himachal Pradesh and the 252 MW Devsari Project, the 60 MW Naitwar Mori project and the 51 MW Jakhol Sankri project in neighboring state of Uttarakhand stand approved, and execution will soon start

Besides SJVN is also a frontrunner for securing the 378 MW Kameng I project, the 80 MW Doimukh project and the 60 MW Ranganadi Stage II project in Arunachal Pradesh. An expert team from the company has already prepared the feasibility reports for these projects.

Having diversified into harnessing renewable energy sources, thermal power and setting up of transmission lines, but at the company’s core remains the business of taming fast flowing and wild rivers; and harnessing them for meeting the needs of energy of a fast growing nation looking to secure its rightful place in the global community.