The moot question is who will answer for failure of the authorities that are charged with maintaining law and order?

The Padmavat film controversy has taken a very ugly turn in large parts of the country. The fringe that perpetuated the problem is running free and doing what it does best – destruction, vandalism and violence – with impunity. There are no two opinions that the issue was allowed to simmer for too long and today it has gone out of hand with authorities sitting on their haunches while public suffers. Without a doubt political leadership that encouraged and supported fringe elements is responsible for allowing the issue to mushroom into a major problem – all because of one movie based on folklore that has been doing the rounds of the nation for centuries without any problem. In the bargain status of nation’s highest democratic institution like the Supreme Court (SC) has been compromised as state governments and fringe elements have flaunted its directives at will without the fear of any accountability. In short the law makers (elected representatives) have joined hands with the lawless (fringe elements) where even small children are not being spared from the wrath of violence and destruction. It just proves what Aristotle said ages back ‘‘at his best, man is noblest of all animals; separated from law and justice he is the worst’.

However there is another aspect to this whole narrative that seems to be missing from most discussions on this issue. The writing was on the wall for last many weeks that violence, protests and vandalism will raise their ugly head irrespective of the orders passed by honourable SC. Statements from leadership of fringe groups like Shri Rajput Karni Sena, Shri Rajput Sena and others made it abundantly clear that for them it was either their way or the highway. Threats to the film makers and cast of the film kept on pouring on a regular basis. Bounties were being offered in public rallies for head of the film producer and nose of the lead female actor. Law and order machinery of all the affected states would certainly have taken note of all these happenings. The pity is that is all they did – keep note of the happenings. Did they take any action against those who issued threats or offered bounties? Did they take effective preventive actions against those who were on forefront of the agitation? Were any deterrents put in place to diffuse the situation or prevent mob violence and destruction in weeks to come? Sadly the answers to all these questions are in the negative. 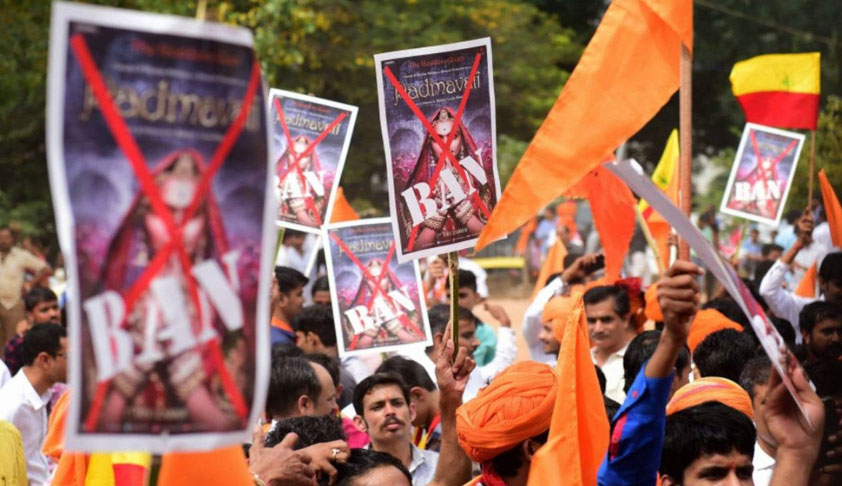 The next question is who should have done all this? Responsibility for maintaining law and order in the state starts from the state’s Home Ministry and filters down to the last Sub Divisional Magistrate (SDM) and Station House Officer (SHO) of the police. In this chain while on one hand the authority starts from the Home Secretary and via Divisional Commissioners, District Magistrates / Collectors  it goes down all the way to the SDM, on the other hand starting from Inspector General of Police it goes down all the way to the SHO. It goes without saying that both these channels have to work together at all levels for best results. The question here is what were all these worthies doing for last few months? Why did they fail to take preventive action despite the fact that the problem was staring them in their faces? Why were they not prepared to protect public property and common citizens when the fringe went berserk and targeted even small children and their school buses? Why were mobs allowed to hold rallies and establish road blocks on roads and highways apart from destroying public property? If police and authorities were proactive most of this could have been avoided but that was not to be. It would be interesting to see what instructions and orders were passed in last few weeks by senior administrative and police authorities down the line to maintain law and order in states like Rajasthan, Haryana, Madhya Pradesh and Uttar Pradesh to ensure safety of common people and public property. Suffice it to say that one will only be shocked at the lack of concern and apathy shown by all concerned.

The moot question is who will answer for failure of the authorities that are charged with maintaining law and order? Surely they cannot make a case that they were awaiting instructions from their political bosses particularly when some of the political bosses were part of the problem? Does it mean that Superintendents of Police or District Collectors will allow their areas to burn and suffer unless the Chief Minister or a Minister asks them to act? What about doing their job in normal course of their duty? Is maintaining routine law and order subject to clearance from Chief Minister or his Ministers? Any police or administrative officer who believes so has to be totally unfit for the position that he is holding. The administration and police are charged with maintaining law and order in areas under their jurisdiction and necessary powers are vested in them for same. Their actions in times of need, in the line of duty, are not subject to concurrence of politicians.

There can only be two reasons for this mammoth failure on part of the administration and police of the states in question. They are either totally politicised or they are totally inefficient. In either case they are unworthy of the positions they occupy and it is time a serious thought is given to this problem that is seen across the nation. It is no secret that administration and the police act selectively and are far from fair in their dealings and actions. Criminal, fraud or corruption cases are registered and investigated to suit political interests of those in power. Cases relating to politicians or the party in power tend to get forgotten for years or investigations are so shoddy that no case can be made against them. At the same time cases are either manufactured or dressed up to look ominous for those not in power. It is any body’s guess who does all the dirty work on behalf of the political masters. Can a common man ever have faith in such administrators or police officers who change colours every time a new political leadership emerges? Is it any wonder that a common man would rather live with a problem than go to the authorities to get it resolved?

The events relating to Padmavat controversy clearly bring out some very uncomfortable facts. The political leadership played to the gallery for the sake of votes albeit at the cost of a deteriorating law and order situation. The administration and police failed in their responsibilities on the ground and allowed the fringe to operate without any fear of the law. In late Baba Ambedkar’s words “Law and order are the medicine of body politic and when the body politic gets sick, medicine must be administered.” Unfortunately our authorities failed to administer the medicine when it was required and that resulted in man becoming the worst of the animals.

It will be foolish to expect politicians to maintain law and order in a state. First and foremost politicians are not permanent fixtures in governments since they come and go with each election. Secondly politicians as a class are mean, selfish and driven by an urge for power at all costs. Therefore they can never be good law enforcers. In the final analysis law and order has to be the responsibility of administrative and police authorities since governments employ them for the same on a permanent basis. They should have one simple aim in discharging their duties and that is to keep the common man safe and subscribe to what Cicero said ages back ‘The safety of the people shall be the highest law’.