Supreme Court: In the days to come its orders will be questioned more and more on the streets rather than in the courts - the defiance of, and the furore over, its Padmavat judgement (even by state governments) is just a trailer......

As befits a country with 33 crore Gods, India has a corresponding pantheon of Holy Cows – both hallowed concepts and hoary individuals – of the religious and secular varieties. Let us talk of the latter since the former is a minefield you enter at your own peril. The sacredness of these ideas and the contributions of these icons could not be questioned, traduced or criticised in any manner for a very long time. Among them we have had Nehru, Mahatma Gandhi, Ambedkar, secularism, Mother Teresa, reservation, the President, the Election Commission and so on. Inevitably, however, as we progressed from one millennium to the other, from potato chips to computer chips, from Ganga Din to Acche Din, history has taken a heavy toll on these Holy Cows. Nehru is now the alleged source of all our Kashmir and China problems, Mahatma Gandhi has been branded an agent of western powers, Ambedkar and secularism are being discredited with Ministerial threats to delete the idea of secularism from the Constitution, Mother Teresa is condemned as one who used the facade of charity to trade for souls, reservation has become a subject which attracts loyalty and vitriol in equal measure, the President has been a cropper since the time of Giani Zail Singh, and the Election Commission has been buried six feet under by my batch-mate Mr. Achal Jyoti. These Holy Cows have now all been consigned to gaushalas. Till a fortnight ago only one Holy Cow remained – the Supreme Court- and it retained this elevated status by a judicious mix of visionary judgments, opacity, the code of Omerta and the threat of the Contempt of Court Act. No more.

The press conference by the four judges of the Court on the 12th of January has removed all four crutches and exposed the institution as just another masticating mastodon, not yet extinct to be sure, but highly endangered. The signs of its humble mortality had been evident for some time – the nepotism tainted colour of appointments, refusal to allow the executive any say in judicial appointments, confused and contradictory judgments, reluctance to take any action against their own, brushing charges of lack of integrity under the carpet. But it continued with its Holy Cow status because no one was prepared to bell the cat, if you’ll permit me to mix up two quadruped species. And then suddenly the Court was affected by the Mad Cow disease and in a suicidal pact belled itself via the four esteemed judges. It has now lost its sacred status, the holy cow has become a Jallikattu bull and anyone can now poke a stick at it. Supreme Court bashing is now our latest gladiator sport and any lawyer with a dubious degree can take a swipe at it. It has lost for ever its mystique, credibility and inviolable aura. In the days to come its orders will be questioned more and more on the streets rather than in the courts – the defiance of, and the furore over, its Padmavat judgement (even by state governments) is just a trailer. We have just lost our last Holy Cow, and I don’t know whether to be happy or sad. True, a Holy Cow in an age of science and reason is an anachronism. But equally, in a country with rusting anchors and no moral leadership, where, as the poet said:

(We) kill without creating,
Hate without embracing,
Doubt without believing –

a Holy Cow is sometimes necessary. Legal fictions are essential for a stable and orderly social fabric, even if they are based on pure belief and not fact. As the philosopher (I think it was Nietzsche ) said: If God did not exist we would have had to create one. Man can live only by believing, not by doubting. Sadly, we no longer have any Holy Cows left, only Holy Shit – lots of it.

I thought that I had become immune to stupefying and jaw-dropping statements from our BJP leaders after Mr. Modi’s assertion that Lord Ganesha is the finest example of organ transplant from Vedic times, Mr. Piush Goel’s claim at Davos last year that unemployment in India is a positive development because it indicates that entrepreneurship is picking up, the Rajasthan Education Minister’s revelation that the Mughals were actually defeated at Haldighati, Yogi Adithyanath’s declaration that the Taj Mahal does not reflect the culture of India, the discovery by an RSS seer that cowdung slapped on a smartphone stops radiation, Mr. Modi’s claim that malnutrition in Gujarat was the result of girls dieting in order to get good figures, Mr. Sangeet Som’s re-writing of history by revealing that Shah Jahan had built the Taj Mahal to imprison his father in it, Sakshi Maharaj’s advice that the only way to protect Hinduism was by ensuring that every Hindu woman had at least four children. Maybe one day all these pearls would be compiled in a textbook for the benefit of all the piglets in the gradually emerging animal farm that was once a proud country. But wait – this stream of drivel has not yet dried up, as Mr. Satyapal Singh has just established.

Mr. Singh is a junior Minister in the Human Resources Ministry and is an ex-IPS officer (I specifically mention this latter bit because it gives a clue as to how the telomeres in his brain function). Last week he went on record to state that Darwin’s theory of evolution was zilch because none of his (the Minister’s) ancestors ever saw an ape turning into a man, and all text books should be corrected to delete any mention of this theory. Mr. Singh is a fascinating study of the Indian, particularly the BJP, politician: the moment they get elected they become instant experts on all subjects. Normally, their deep knowledge of things they have no clue about would provide us much needed amusement as we stand in various queues, but matters become a bit worrying when a Minister of Education seeks to fashion text books in his own ignorant image. 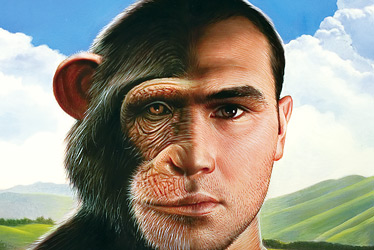 Mr. Singh, sir, the ape did not turn into man in the manner of Clarke Kent turning into Superman in thirty seconds. Actually, it took millions of years – about six million years, to be precise – and progressed through various sub-species of hominids, including the Florensiensis and the Neanderthalensis, before arriving at your respected ancestors, Homosapiens  (incidentally, sir, before you take off on another ill-informed tirade, the Homo in Homosapiens has got nothing to do with homosexuality.) And no one in your family witnessed the “event” because they were all probably too busy leaping from branch to branch in search of breakfast since there were no subsidised Parliament canteens back then. And, presumably, Mr. Singh also believes that the dinosaurs never existed because his ancestors did not see them too. Actually, to be fair to the honourable Minister, his breath-taking view of palaeontology can be traced to his training as a police officer. For our men in khaki (the RSS no longer wears khaki) seeing is believing and they must have an eye witness for everything – that is why most of their time is spent in “locating” eye witnesses rather than solving the crime. Hence Mr. Singh’s insistence that if no one saw an ape turn into a man then Darwinism has to be trashed, especially as it would be difficult – even for our Indian police – to find a witness to an event that occurred millions of years ago. But the Minister has a good opportunity to validate his theory in reverse – whether man can turn into an ape – since it appears to be happening all around us these days with great evolutionary vigour.