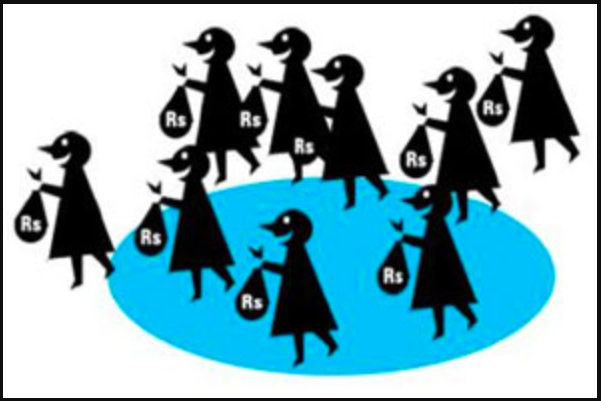 I seem to have developed a fascination for Economics this autumn, or at least for what passes for Economics in the land of the Arthashastra. I say “passes” advisedly because everybody today- pracharak, gau rakshak, my kiryana dealer, even Kamal Hasan- has an economic theory of his own. These, to use a term in vogue, are the informal sector economists. The formal sector economists – those from DSE, LSE, prime time TV and JNU (yes, they still hold classes there, sometimes, when the faculty and students are not in the Vasant Kunj lock-up) – on the other hand, can never agree on anything. The RBI governor never speaks, Mr. Jaitley never stops speaking, Chief Economic Advisors come and go faster than a metro train at peaktime on the Blue line, Mr. Modi still treats economics as an acronym naming game, Mr. Rahul Gandhi has officially given credit for his economic discoveries to his dog. Are you therefore surprised that I am as confused as the Customs Officer who asked an absent minded Professor of English (an ardent admirer of Oscar Wilde) whether he had anything to declare, and received the reply: “Nothing but my genitals.”!?

Which naturally brings me to a term very much in fashion these days – NPA or Non Performing Assets – not to be confused with NDA or Non performing Democratic Alliance. Now, in my time, Non Performing Assets denoted a condition which required the attention of a Sexologist or one of those Khandani Shafakhanas in the by-lanes of Paharganj, advertised with a mug shot of a stud with handle bar moustaches. Not any more in these post Samuelson days. NPA now means a bank loan gone bad and currently amounts to about Rs. 8 lakh crores. Mr. Jaitley’s prescription is to recapitalise the banks with Rs. 2.11 crores of – you guessed it – your and my money. The loans will be written off, the defaulters will be back to their unscrupulous ways, and in a few years it will be time for NPA-II. The FM has the full support of the Banks and big business for his scheme, which is not surprising since, as George Bernard Shaw said: ” A government that robs Peter to pay Paul can always count on the support of Paul.”

“Demographic dividend” is the next phrase that puzzled me. Its supposed to be one of our primary strengths, according to Surjit Bhalla and Sunil Alagh, the spy vs spy duo who do their vaudeville act every evening defending the govt. on TV. My first assumption was that it meant a monthly pay out (dividend) to me from my sons (my demographic investment). Not so, said my sons who are NPAs themselves, as far as I am concerned. I now learn that it refers to the huge population of under 35s that we have, about 500 million, give or take a hundred million. According to the economists they give us a huge advantage in the labour market. Really? It seems to even a Hindu College graduate like me that, for the advantage to accrue, these guys have to be employed, right? Given our huge (and grossly under estimated) unemployment and under employment rates, our demographic dividend is right now sitting on its collective backside in the hundreds of millions, taking selfies or playing the Blue Whale game with gay abandon as if the world were coming to an end (which it probably is, courtesy Mr. Kim and Mr. Trump). How can they possibly make us the ” fastest growing economy in the world”- if, that is, the definition of the word economy has to extend beyond the Ambanis, Adanis, Mittals and other Forbes centre-spreads?

Here’s another conundrum: how is it that, with the economy going rapidly down shit-creek, our stock markets continue to soar into the stratosphere faster than a North Korean ICBM ? The Sensex and the NIFTY are setting new records everyday. My addled brain, weaned on simple sarkari gibberish, couldn’t explain this contradiction, so I asked my younger son who is an investment analyst to explain it to me . preferably in two syllable words or in easy- to- understand- pictures. He did – in sign language – and now I can figure out the sleight of hand. You see, the North Korean analogy above is not so facetious, after all. Like Mr. Kim’s Politburo, the Sensex and Nifty are a closed club with hand-picked companies, numbering just about 150. Only their performance is tracked, and since they consist of the Pauls mentioned earlier, and of the ones who donate liberally to the political parties, they are obviously doing well. Furthermore, just about 1.5% of the population of the country is invested in the stock market. So the whole operation is like an incestuous organisation or a Playboy club, the bunnies and wolves being replaced by the bulls and bears. What the Stock Market does, therefore is a pure hedonistic exercise, a monetary inbreeding which has no effect on the rest of the country or economy. Thank you, Saurabh. I’ll return the favour some day by explaining how governments fudge their budget deficits.

Time was, when you wanted a haircut you went to the barber on the roadside, or (if you belonged to the North Korean club) to a salon where you paid one rupee per hair fallicle (the dandruff is free). Not any more. Now you go to the NCLT or National Company Law Tribunal where corporates who have siphoned off all the loans tell the bankers: “Bu***r off, I’m off to St. Kitts.” So what do the bankers do? They take a “haircut” which is the correct economists’ term for getting scalped. A “haircut” means that the banks settle for a much lesser sum than what they are actually owed. The reason is simple- in English it is “something is better than nothing”, but it is more vividly expressed in Hindi: “Bhaagte bhoot ki langoti pakarna”- grabbing the briefs of a ghost. So, while Mr. Mallya can grow his locks as long as Rapunzel’s, you and I have to go for a butch hairstyle.To make up for this loss, however, you can bet that Mr. Jaitley is going to be grabbing you by something else in next year’s budget.

Time to hang on to your Non Performing Assets.