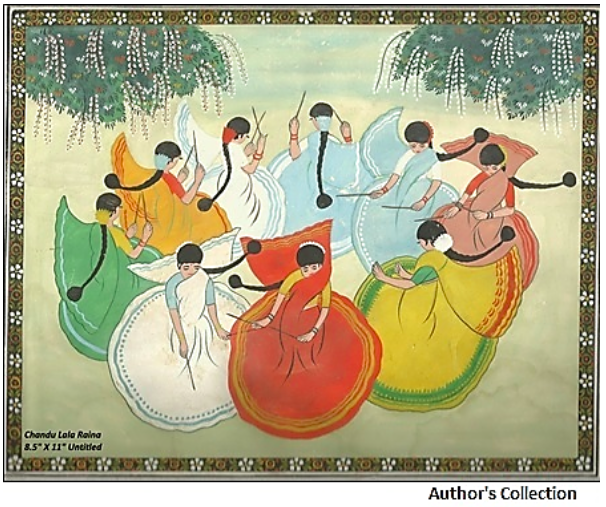 Indian art is the term commonly used to designate the art of the Indian subcontinent, which includes the present political divisions of India, Pakistan, and Bangladesh. Although the initial impact of Islam on Indian art was generally destructive, Islamic influences entering India were gradually transformed in the new environment and eventually resulted in the flowering of an extremely rich and important aspect of the Indian genius. Painting is the best of all arts, conducive to dharma, pleasure, health, and emancipation. It gives the greatest pleasure, when placed in a house. By proper selection and distribution of colours paintings become delightful.

Miniature painting developed in western India in the 10th century in the state of Gujarat. The human figure was represented in the simplest and most visible manner. The Mughal School of miniature painting reached its zenith under Akbar and Jahangir; Pahari painting grew out of it, though this was patronized mostly by the Rajput kings who ruled many parts of the region, and gave birth to a new idiom in Indian painting. The colours were extracted from minerals, plant sources, conch shells, and even by processing precious stones; gold and silver were also used. The preparation of desired colours is a lengthy process, sometimes taking weeks. Artists use natural dyes and pigment extracted from leaves, herbs and flowers. The ornamentation was increased to result in heavy stylization.

The pictorial art of Kangra is one of the finest gifts of India to the art-world, named after Kangra, Himachal Pradesh, a former princely state, which patronized the art. The influence of late Mughal art is evident in the new Kangra style.

During the mid-18th century, a number of artist families trained in the late Mughal style apparently fled Delhi for the hills in search of new patrons and more settled living conditions. This great art originated in Guler State, a small hill state in the Lower Himalayas when a family of Kashmiri painters trained in Mughal painting Style sought shelter at the court of Raja Dalip Singh (r. 1695-1741) of Guler. The rise of Guler Paintings started in what is known as the early phase of Kangra Kalam. Maharaja Sansar Chand Katoch (r.1776-1824) was a great patron of Kangra art.

The new arrivals mingled with the local artists and were greatly influenced by the atmosphere of the hills. The Guler-Kangra art is the art of drawing and the drawing is precise and fluid, lyrical and naturalistic. In these styles the faces are well modelled and shaded so judiciously that they possess almost porcelain-like delicacy. 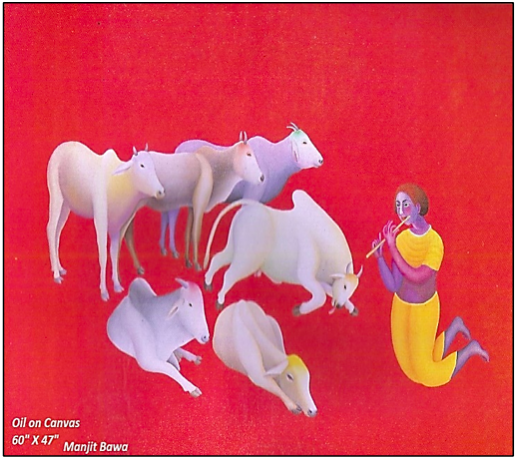 The paintings were naturalistic and employed cool, fresh colors. The colors were extracted from minerals, vegetables and possessed enamel-like lustre. Verdant greenery of the landscape and springs were the recurrent images on the miniatures. Towns and house clusters often appeared in the back drop. 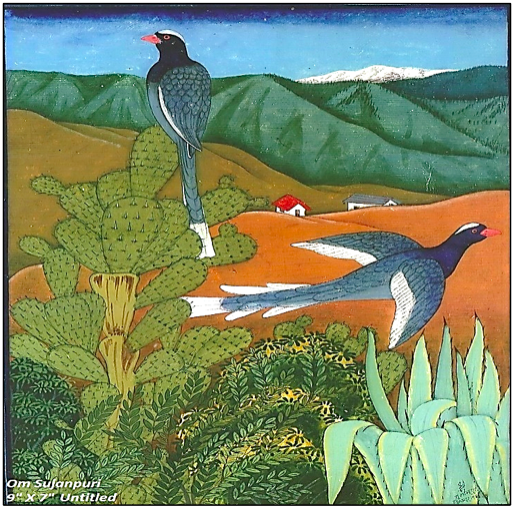 Great attention is paid to detail. The foliage depicted is vast and varied. This is made noticeable by using multiple shades of green. The Kangra paintings feature flowering plants and creepers, leafless trees and rivulets. The Kangra artists adopted various shades of the primary colors and used delicate and fresher hues. For instance, they used a light pink on the upper hills

to indicate distance. Kangra paintings depict the feminine charm in a very graceful manner. Facial features are soft and refined. The female figures are exceptionally beautiful.

Later Kangra paintings also depicted nocturnal scenes and storms and lightning. The paintings were often large and had complex compositions of many figures and elaborate landscapes. Towns and house clusters were often depicted in the distance. The Kangra painters used colors made of vegetable and mineral extracts. They employed cool and fresh colors. Kangra paintings are known for the lyrical blending of form and color. The shape and contours of eyes, body parts, landscape, flora and fauna play a major role. The sharp expressive eyes in this form of painting are called ‘kamal nayan’ (lotus-shaped). Though artists like Chandu Lal Raina, Om Sujanpuri  O.P Tak and Anupriya have carried forward the tradition, youngsters are showing an interest too.” Though the main centre of Kangra paintings are Guler, Basohli, Chamba, Nurpur, Bilaspur and Kangra. Later on this style also reached Mandi, Suket, Kulu, Arki, Nalagarh and Tehri Garhwal (represented by Mola Ram), and now are collectively known as Pahari painting.

Most of the works follow the technique of Kangra School but with present modern themes, some artists have also experimented with modern painting. Contemporary artists are taking up the Kangra style. Fortunately, Sri Krishna’s pastimes are eternal, and will ever serve as inspiration to the artists taking up this noble work. Manjit Bawa’s work presents a refreshing contrast. One 0f the paintings, in my collection, made by Chandu Lal Raina was renovated by his son Sh. Anil Kumar Raina, at Dharamshala, way back in the year 2000.

Om Sujanpuri also tried his hand in almost all styles of Pahari schools. He is credited with a number of state awards, Himachal Gaurav and Kalidasa from Madhya Pradesh; and also from Punjab Lalit Kala Academy. He is also working on folk songs recreating them into paintings. Madam Manorma, his wife, is critical of the recognition by their native district and the home state; outsiders are rather more appreciative of his works.