The Indian Constitution gives us six Fundamental Rights: right to Equality, right to Freedom, right against Exploitation, right to Freedom of Religion, Cultural and Educational rights, and the right to Constitutional Remedies. The Supreme Court has recently given us another one: right to Privacy. It sounds pretty impressive on paper. Now, I’m no legal expert- for a long time I was under the impression that “corpus delicti” meant a beautiful body, and till recently I thought that RIP on a judge’s grave meant Recused in Perpetuity, in deference to a common practice in inconvenient cases. But even I can see that these fundamental rights are not available to large sections of society, and of late they are being denied with renewed vigour.

Equality still eludes millions of dalits, tribals and the poorest of the poor; our push for a digital India with Aadhar as its trumpet call is further disadvantaging these sections and denying them access to public welfare services such as pensions and food rations. Talk of equality is a farce when 200 million people go to bed hungry, when 15% of the population in under nourished( FAO figures), when 34% of the children are stunted, when the top 5% of Indians own 65.5% of the country’s wealth while the bottom 50% have to make do with only 4.5%. Freedom is still a dream for millions of bonded labour and child workers, and for those who are indiscriminately arrested by the police, for the more than 400,000 undertrials in prisons, most of whom will be acquitted if their cases ever come up for trial in a system as clogged as a railways toilet. Freedom of religion did exist for some time, but is now being threatened by new conversion laws in some states that require the approval of a District Magistrate before one can exercise that option. The sporadic demands for a Uniform Civil Code and a muscular assertion of majoritarianism constantly haunt the minority psyche. Educational rights consist of mere statistics of enrollment figures; in actual practice, so dismal is our govt. educational system that a Class 6 student lacks the ability of a Class 2 student; 27.51 of every 100 children who join school drop out by the time they reach Class XI. Those who pass out of college are unemployable. The hardest hit here are the physically disabled: of 28 million not even 0.1% have access to schools and 0.01% to higher education. The courts are waging a valiant but losing battle to enforce our right to Constitutional Remedies, hamstrung by an adversarial central govt. and its own internal shortcomings. How, for instance, does one enforce one’s constitutional right to freedom of expression when the govt. will not act against those who murder it ? Seventy journalists have been killed in the last 14 years, hardly anyone has been punished. How can this right be exercised when draconian laws- criminal defamation, sedition- are used to muzzle any contrary voice ? These remedies, unfortunately, are available only to the rich and powerful, usually to save their own skin. 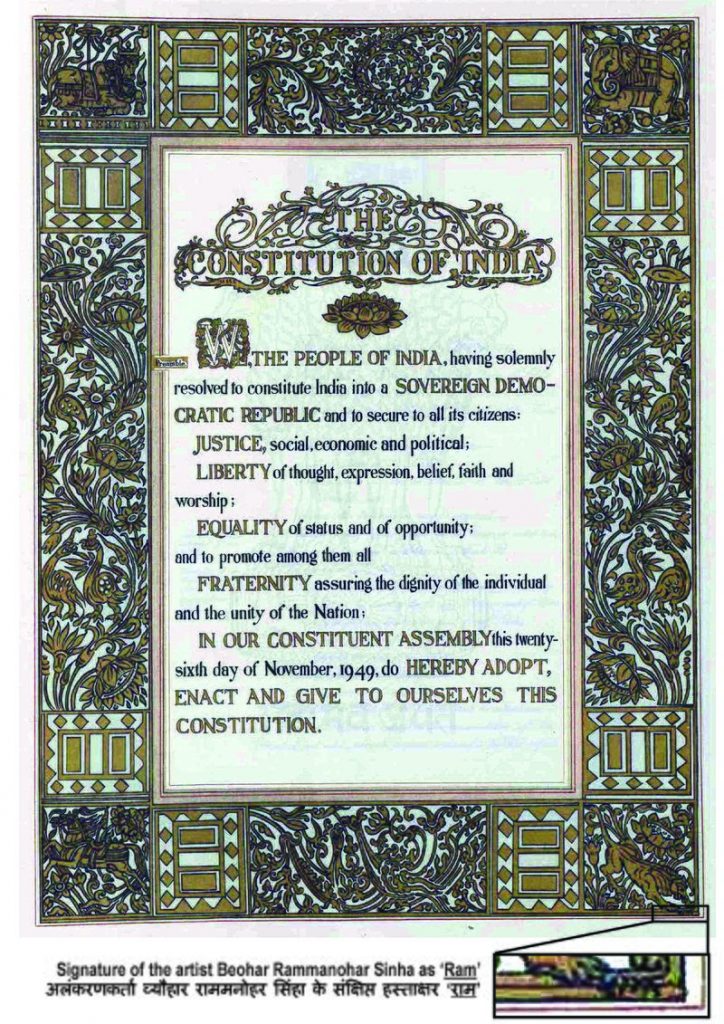 There is, however, one Fundamental Right that the Constitution has not given us, but one which is being enforced these days on a daily basis- the Right to be Offended. ” Hurting the sentiments” of any one of the country’s seven religions and 7331 castes/communities is an offence under the IPC and is the trigger for claiming this right. This legal oddity has always existed, right from the days when the film Kissa Kursi Ka and Rushdie’s Satanic Verses were banned by the Congress, but over the last three years it has acquired an accelerated virulence and a violent character. Organisations- mainly perceived to be of the far right- have sprung up whose sole purpose in life is to feel offended. Anything which does not conform to their regressive ideology or can help them win the next election is a legitimate source of causing offence, and therefore for raising the demand for a ban, criminal prosecution, apology or mindless violence. Offence is taken at girls wearing jeans or a young couple going out in public ( Valentines Day ?), MS Dhoni appearing as a Hindu God on a magazine cover, Kamal Hassan’s comment about Hindu terror, any form of sympathy for a Kashmiri or for the Kashmiri perspective, support for a Pakistani cricket team, any questioning of the Indian Army ( sedition), possession of cattle or meat, intercaste marriages. Creative work- films, books, paintings- the very mediums which advance civilisation and its best values, are the primary founts of imagined offence and hence the primary targets for the proponents of this right.

Taking offence has de facto become a fundamental right these days and is being practiced on a daily basis. The latest instance is that of the film PADMAVATI. Official Rajput organisations have joined hands with criminals and louts to ransack theatres, offer Taliban type of rewards for beheadings, hold up trains and threaten to maim the artists. As the furore over this film has demonstrated, two factors are conferring legitimacy on the sinister assertion of this right to be offended. One, neither the central govt. nor the concerned state govts are taking any action against these criminal elements for violence, criminal intimidation, destruction of public and private property, wrongful confinement, instigating public disorder, contempt of court, etc. Second, and even more telling, is the fact that this manufactured disturbance is being supported by these same govts, directly or indirectly. Union Minsters have done so by proclaiming that film-makers should be “sensitive to cultural feelings” and to the “status of women”, state Ministers have lamented that the feelings of the Rajput community have been “hurt”, the UP, Punjab and Haryana CMs have asked for a ban on the film, the MP and Gujarat Chief Ministers, in their attempts to out Herod all other Herods, have actually banned it ( even though the Supreme Court has refused to do so!), the Rajasthan CM wants it to be censored, the Union Home Minister declares that even if the film is cleared by the Censor Board the govt. can always review it. The Congress and other opposition parties maintain a psephological silence, for this is the age of votes, not values. Only Mamta Banerji has had the guts to speak out in support of the film.

Other constitutional rights be damned. The only fundamental right which matters in India today is the Right to be Offended, and this has become the new clarion call for the self appointed custodians of the country’s culture and national pride. The govt. appears to agree and has legitimised it by its inaction, bans and statements. It may as well take the next step and legalise it: amend the Constitution and provide for it as the seventh fundamental right. We may as well end this “willing to wound but afraid to strike” charade and reveal ourselves in all our regressive glory. Then our country can officially become the kind of unfortunate place WB Yeats had written about , a place where
” The ceremony of innocence is drowned,
The best lack all conviction, while the worst
Are full of passionate intensity.”
Welcome to the New India of 2022.