The Islamist protests in Karachi, Lahore and Islamabad are somewhat unprecedented. It is yet to be seen whether it is prelude to formal military takeover in Pakistan but it surely is not only the chicken coming home to roost, simply because the chicken have been experimented upon within Pakistan itself for considerable period of years – gradually induced radicalization to start with but apparently without realizing what the future consequences would be.

More than eight years back, Nasir Abbas Mirza wrote in his article titled ‘A Monstrous Experiment’ published in the Daily Times of Pakistan on 11 May 2009, “There are thousands of madrasas spread all over Pakistan’s urban centres that are producing millions of neo-drones …Take a little boy and incarcerate him in a remote madrasa. Indoctrinate him with a distorted version of a religion and tell him that he does not belong to this world. Teach him about the fanciful world that awaits him in the heaven, and that in order to attain that he has to destroy everything that stands in his way, including his own body…… At full steam ahead in Pakistan, this is a monstrous experiment in brainwashing and it is on a par with, if not worse than, Nazi Germany’s eugenics. They did it in the name of science; here, it is being done in the name of God and religion. On a very large scale, this is a hugely successful experiment in which nurture triumphs and nature takes a beating”.
But while Nasir Abbas Mirza was talking about Islamists radicalizing children in madrasas, in the same year, Pervez Hoodbhoy, nuclear physicist, Quaid-e-Azam University, Islamabad wrote of promotion of militarism in Pakistan’s schools, colleges and universities, militant jihad having become a part of the culture in college and university campuses, and armed groups inviting students for jihad in Kashmir and Afghanistan (https://therearenosunglasses.wordpress.com/2008/10/09/cia-and-pakistani-radicalization-of-pakistani-and-afghan-children/). Aside from eyeing J&K, Pakistan wanted to rule Afghanistan by proxy, which it still aims for hoping for US-NATO to eventually withdraw. When Obama had announced withdrawal from Afghanistan, Asad Durrani, former head of Pakistan’s ISI had delivered a speech in London in 2014, that according to Myra McDonald, almost amounted to a victory speech – hoping Pakistan could finally turn the clock back to Sept 10, 2001, when it exercised its influence over Afghanistan through its Taliban allies (http://warontherocks.com/2014/12/explaining-pakistans-confidence/). The clock appears to be certainly turning back, but not what Pakistan wanted.

As per news, one security personal was killed and over 150 injured on November 25 as Pakistani security forces moved to clear protestor blockades; some 8,000 security personnel deployed against around 2000 protesters in Islamabad. But this may not be just the story as Pakistan has blocked all news channels, as well as the social media including Facebook, Twitter and YouTube. The number killed may also be more, which may or may not be later reported as having succumbed to injuries. The security forces action was ostensibly after the Islamabad High Court (IHC) issued contempt of court notice against Interior Minister Ahsan Iqbal for failing to implement orders to clear the roads. Isn’t it ironic that while the ISI introduced stone pelting in J&K, its own security forces are being pelted with stones by the Islamists? 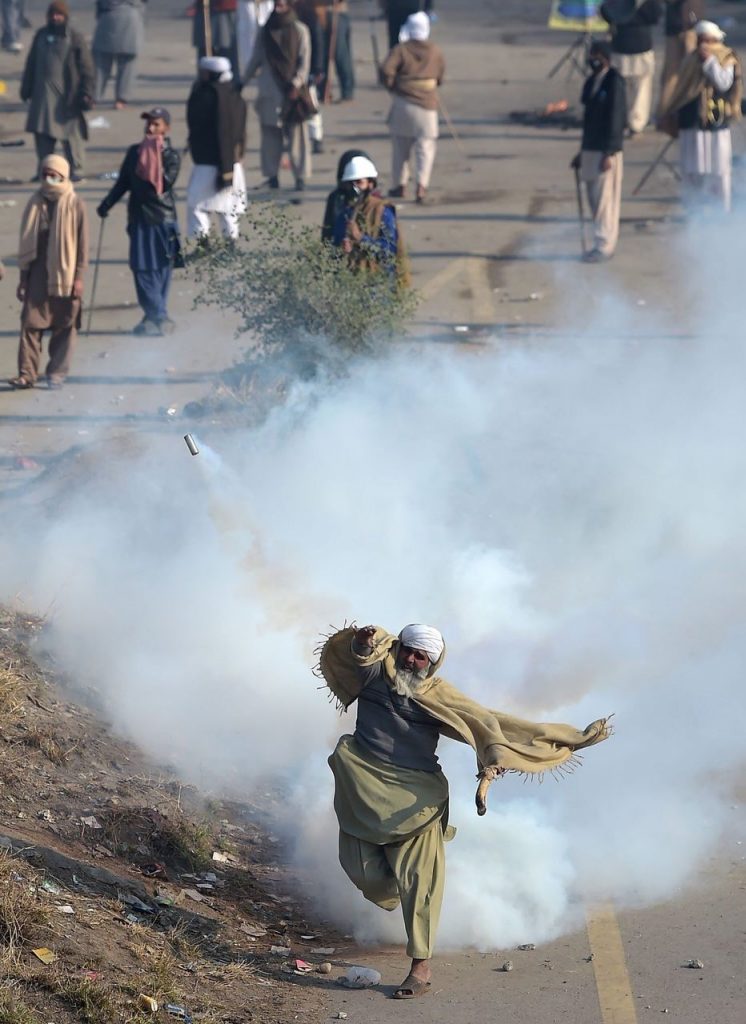 Army Chief Qamar Javed Bajwa has reportedly talked to PM Shahid Khaqan Abbasi urging peaceful solution to the problem. It is also reported that so far
police have failed to dislodge the protesters from Faizabad interchange which they have been occupying for about three weeks, which is not a surprise since these 2000 or so from Tehreek-i-Khatm-i-Nabuwwat, Tehreek-i-Labaik Ya Rasool Allah (TLYR) and the Sunni Tehreek Pakistan (ST) have been successfully blocking the Islamabad Expressway and Murree Road that connects Islamabad with its only airport and the garrison city of Rawalpindi for more than two weeks demanding resignation of law minister Zahid Hamid for changes made about Khatm-i-Nabuwwat or finality of prophethood oath in the Elections Act 2017 passed in September. Significantly, the protests are not in Islamabad alone but are also concurrent in Karachi and Lahore. The house of a former home minister of Pakistan has been burnt. In addition, a serving Pakistani minister has resigned. In Lahore, many lawyers with Islamist leaning have joined the protests. While all Islamists including pro-Al Qaeda groups have apparently joined forces against the Pakistani government, several journalists and reporters have been beaten up by Islamists, and a police station in Gujarat City, Punjab Province of Pakistan has been burned down. 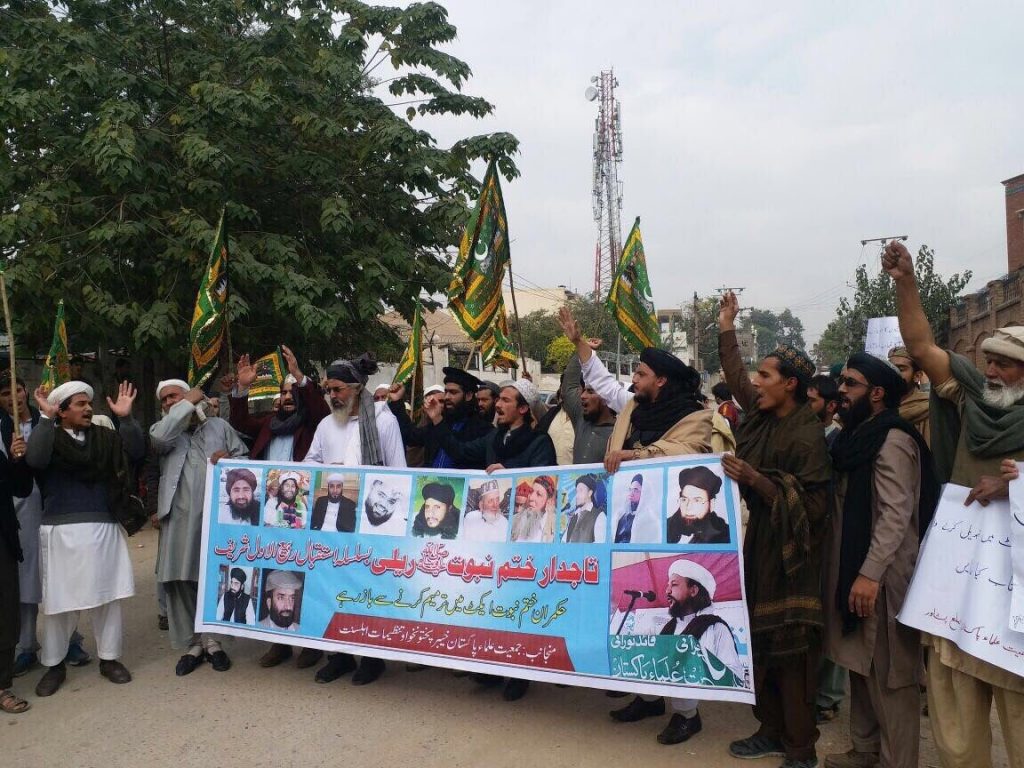 The above mentioned reason may not be the sole reason for this type of widespread protests, and there may be more to it including the power struggle in the country. The role of the Pakistani military that rules the country is also ambiguous. After all how did they permit blocking of the Islamabad Expressway and Murree Road that connects Islamabad with its only airport and the garrison city of Rawalpindi for more than two weeks? It can be more than expected that that Pakistan would put the entire blame on India’s R&AW, but Pakistan cannot deny the fact that the Islamists cauldron it has been brewing over the years has started to overflow.

All this can hardly be music to Beijing, which depite having nurtured radical mullahs like Masood Azhar and Hafiz Saeed, can hardly expect to escape the Islamists wrath at some point of time in the future, not only for the cultural invasion of Pakistan but also its ongoing acts in Xinjiang. For example, Chinese security forces are detaining Muslims in Xi’an city for sharing Quran’s MP3 audio files, as also China is targeting some 1.5 million ethnic Kazakhs living in Xinjiang from following their religious customs (https://www.aninews.in/news/world/asia/now-china-targeting-ethnic-kazakhs-living-in-xinjiang-for-their-links-to-uyghurs201711250851310001/). It may not be surprising that the backlash will come along the One Belt One Road (OBOR) as well as the China-Pakistan Economic Corridor (CPEC), latter coupled with the arrogant Chinese behaviour against locals and Chinese companies firing Pakistani workers. However, for the time being it would be interesting to watch which way the Islamist rage flows in Pakistan, with radical politicians like Imran Khan having come up purely on Islamist support, waiting in the wings.
Prakash Katoch is third generation army officer hailing from Himachal Pradesh. He is former Lieutenant General from Special Forces and post retirement has published over 1300 articles on international affairs, geopolitics, military, security, technical and topical issues besides authoring two books. He is active in seminars at both national and international levels.