The week before last I had written an article for the New Indian Express disagreeing with the government’s move to introduce lateral induction in the IAS (Privatising The IAS Would Be A Mistake, 14th Oct. 2017). The feedback from the readers was interesting and has prompted me to analyse at least one part of it in some detail. Those in favour and against were equally divided, about 50:50, but what surprised me was the anger, vitriol and contempt for the IAS among those who favoured privatisation. They gave three primary reasons for this: the IAS was a service which had developed a cosy nexus with politicians, it was self-seeking, and it had made itself completely unaccountable to both the government and the public. How much truth is there in these not flattering charges?

Plenty, I’m afraid. But for the purposes of this piece I’ll concentrate only on the first one, the parabiotic relationship that the IAS shares with the politician, to mutual advantage.

The IAS has occupied all the commanding heights of government over the years, but in order to remain there it has had to strike a Faustian bargain with the political executive. It is now the gate-keeper to the political authority, controls all Cabinet Committees and Ministries, policy making and all postings, promotions and appointments, even those of judges and military commanders. No one- but no one- is allowed to breach their hallowed portals. The armed forces, for example, have been trying for years to gain meaningful entry into the Defense Ministry and to have a COAS but have been thwarted time and again. The IAS has consistently, and fiercely, protected its pay scales and promotion avenues in all Pay Commissions and even awarded itself the “Apex Scale”, an HR monstrosity, which has subsequently cost the government tens of thousands of crores in extending it to other services. It has cornered all post retirement sinecures, except where the judiciary has staked its claim first- but even that is smart give and take! It has had to pay a price for this, however. Unlike the “YES, MINISTER” model, where the astute civil servant controls the politician through deft tactical manoeuvres, team spirit and by thinking one step ahead of the politician (without compromising either his service or the public interest), the IAS has surrendered to the politician. This capitulation is of two types. The vast majority of officers have no political loyalties, try to be neutral but generally flow with the current, taking the easy way out. They are not “politicised” but merely compliant. A small minority, not more than 10%-15 of the cadre, however, become active camp followers of one political party/politician or the other and promote only their interests, whether they are in or out of power. They represent a spoils system within the service and are the main reason why the IAS is seen to be politicised. And thereby hangs a tale. 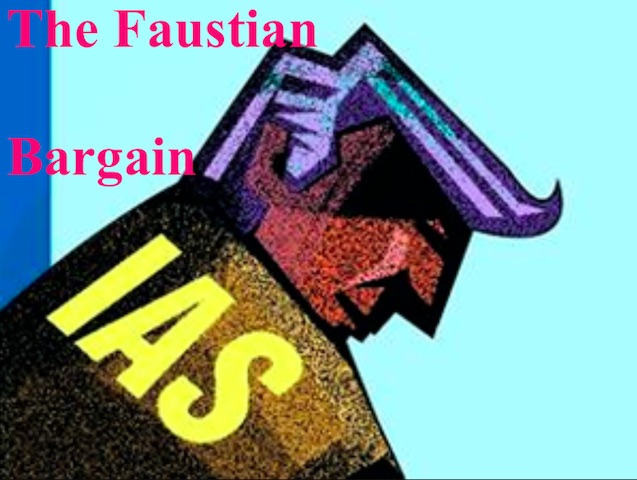 One of my readers, Mr. Duggaraju Srinivasa Rao from Andhra Pradesh, has sent me an interesting postulate. The IAS, like the other two All India Services, is structured into state cadres: an officer is allotted to a state which then becomes his cadre for life and he is expected to be loyal to that state. Mr. Duggaraju’s thesis is that over time an unofficial sub-cadre has emerged in all states- these are political sub-cadres where the officer is allied with some political party or the other and subserves its interests (rather than the public interest)! I find this postulate fascinating- and true!

Such sub-cadres are an inevitable progression when officers, for purely personal gains, attach themselves to a political party, preferably the one in power, and swear allegiance to it. Over time they become “branded” and rise and fall with the fluctuating fortunes of that party and constitute a distinct sub-cadre within the state cadre. Thus the UP cadre of the IAS has its Samajwadi, BSP and BJP sub-cadres, Tamil Nadu its DMK and AIDMK sub-cadres, West Begal the TMC and CPI sub-cadres, Himachal has the BJP and Congress sub-cadres, and so on. No state is exempt from this Duggaraju rule, except perhaps Delhi where Mr. Kejriwal is too hot for any IAS officer to touch, especially with Big Brother watching from North Block!

Readers from Himachal can see this thesis playing out right before their eyes! Both the BJP and the Congress have a bunch of IAS officers in their sub-cadres (and most readers can probably name most of them too!). When their parent party is in power they occupy all the important posts and hound the officers of the other sub-cadre with transfers, departmental action and even FIRs. When their party is in opposition they lie low, go on long training assignments, study leave or central deputation. If none of these escape routes are available then they maintain a low profile, leak official secrets to their mentors or sabotage the current government’s programmes. When they retire they get plum supernumerary assignments, but for this the timing has to be perfect. It is important that they retire when THEIR party is in power, or they won’t bag the sack of oats. If the timing does not match then they take premature retirement to avail of the sinecure in advance- a bird in hand is always worth two in the bush, especially if the bush may not be around for much longer!

To extend Mr. Duggaraju’s analogy, there are other types of sub-cadres also. To continue with Himachal, there is the Regional sub-cadre (do you belong to Old Himachal or New Himachal ?), tribal sub-cadre (officers from Kinnaur, Lahaul-Spiti, Bharmour and Pangi), Outsiders sub-cadre (allottees from other states marooned on this mountain), Reserved category sub-cadre (SC, ST, OBC). When I joined service in what now feels like ancient India there even used to be St. Stephens and Allahabad University sub-cadres !

To an extent, such groupings are not bad per se in that they promote an espirit d’corps, like in an Army regiment, for example, which only strengthens the organisation. But when they get overtaken by politics, and their only raison d’etre is self seeking aggrandisement (as the IAS sub-cadres have become) then they vitiate the service and weaken it. Incidentally, it would not be fair to only tar the IAS with this brush- it exists in all government services, including the IPS, the Indian Forest Service, the state services, and down to the clerk in the Secretariat or the patwari in the field. That the government still manages to hobble along is due to the other 10% who still abide by the oath they took when they joined service. They are the Rohingyas of the civil services- stateless persons allied to no party, squeezed between opposing forces and unwanted by the powers that be, perpetually under threat of deportation to Delhi or Pangi or the north-east- but THEY are the real civil service, not the time servers and camp followers of the political sub-cadres.

To conclude, Mr. Duggaraju’s law is playing out right now in Himachal, which goes to the polls on the 9th of November. Since the BJP is widely expected to replace the Congress, one can now see the Congress sub-cadre chaps frantically digging their burrows and packing in the provisions to weather the long winter ahead. The BJP sub-cadre, on the other hand, is now coming to life like grizzly bears after a long hibernation. And like the bears, they are hungry- for power, the loaves of office they have been denied for the last five years. They are already busy short listing their preferred postings and preparing a Schindler’s list of the damned. Like homing pigeons, they will soon start returning from central deputation, study leave or wherever they were in hiding, and head straight for the house of the likely CM nominee. Incidentally, I have always believed that pollsters and psephologists predicting election results spend a lot of unnecessary money and time in doing opinion and exit polls. Instead, they should simply watch the bureaucrats- the weather vanes, as it were- who always know who will form the next government. Watch the sub-cadres and you will never go wrong.