One of the most discussed male figures of the Indus valley art forms is male torso. This nude male torso stands somewhat equal to the beautiful art of Ghandhara, two thousand years later. Male torso front attaches great importance to people, maybe not all appreciate a torso. 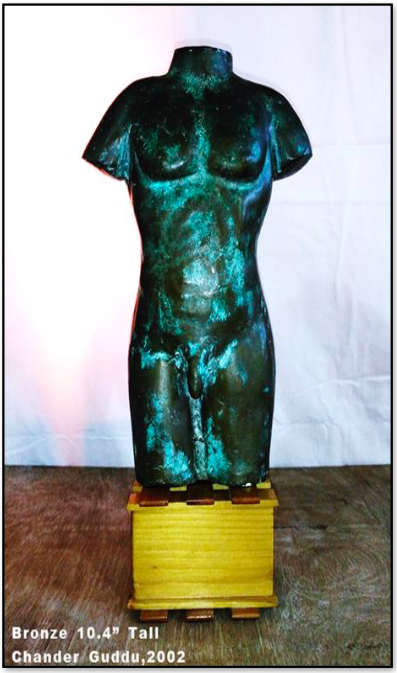 Guddu’s ‘Male Torso ‘has a tale to tell from early 21st century. From Triveni Kala Sangam to Garhi Studio- Lalit Kala Akademi on to the sand casting foundry. Back to the studio to rework minor details with a chisel, chasing and sharpening; and then to give the surface a smooth, reflective shine by polishing it; carrying on till patination to give fading, darkening and aging effect. The figure is presented frontally nude, and in standing position with star shaped pubic area.

Inspired; in Feb,2002, during the days of my modelling in claly in Madam Saro Jain’s studio I conceived the idea of creating a male torso. Female artists around; Mrs Madhulika Jha being senior ;  shared many ideas.  The other one suggested that I better gazed at myself in to mirror to get the right perception of my prospective model. That is how I tried my torso.

In the early days photographs were used as cheap substitutes for actual nude models. Nude photographs and the artists who took them had to hide under some sort of justification to avoid social and legal persecutions of the time and sale of “obscene objects”, these nudes were titled “artist’s studies” to avoid conservative homophobic judgment and government censorship, which could have led to fines and even imprisonment for possession. 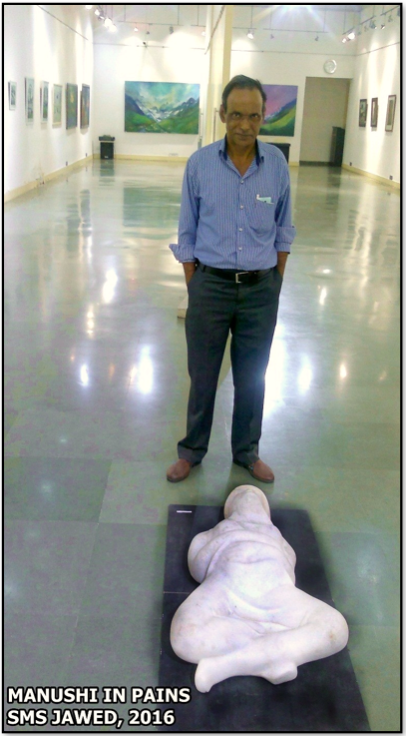 I read somewhere that a waist-to-hip ratio of .87 and a waist-to-chest ratio of .74 was ideal for men and that women used the shoulder-waist ratio to determine the attractiveness of men. that the perfect body size was not the bigger and muscular as found in body-builders but rather a lean and slightly lower muscle mass was what attracted women. This therefore led to the conclusion that the shoulder to waist ratio was the best in knowing just how attractive a man is. Women prefer men whose torso has an ‘inverted triangle’ shape (i.e. a narrow waist and a broad chest and shoulders). This is a shape consistent with physical strength and muscle development in the upper body.

Current ideals of male body shape, where the emphasis is on broad shoulders and a well-muscled chest. study reveals that women are most attracted to muscular men whose shoulders measure 1.6 times the size of their waists. One of Swami’s studies shows that women prefer a chest-to-waist ratio of 1.4 (It’s a smaller ratio than 1.6 since your chest is narrower than your shoulders.)  . When women look at men’s torsos, the V shape is victorious. .”When women judge a man’s physical attractiveness, lower-body shape plays a negligible role.”

The desire to look attractive is much stronger compared to the hope of becoming fit and healthy. Leanness rules over hugeness. The right lean body shape that is the dream of any man.

Someone proposed Garhi Studio, for turning clay in to bronze; where I met Jawed by chance, who showed me his studio No. 5; and I liked working. A plaster of paris mould of the clay followed by sand casting and machining in the vicinity, did the bronze. After working details, patina was applied. The torso’s height, chest, waist and hips   measure 10.4”, 11.7”,9.7”and12.2”, respectively; weighing 3.25 K G. Waist Hip ratio is 0.8 &Waist Chest ratio of 0.83. But before you launch into the workout, know that you don’t have to achieve picture-perfect results. 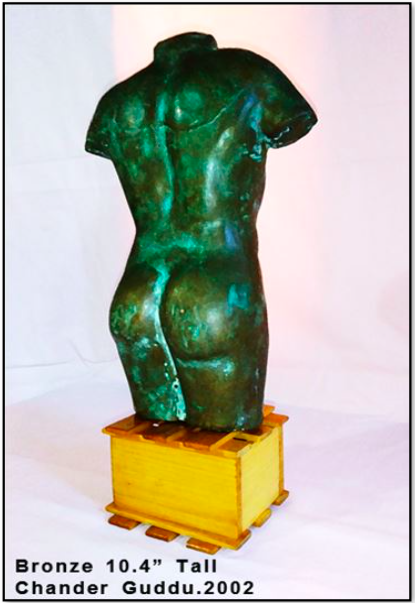 In Prof. S M S Jawed I discovered a noble human being and a modest artist of international fame. He has been recognized by A.I.F.A.C S. award ‘82, ‘95 and National Award ‘87, Lalit Kala Akademi, SKP Annual Award ‘88 to mention a few .The sorrow of human beings, the heart rending loneliness of empty souls are his inspirations. His works are thus the portrayals of angst, the stories of pain yet in a manner so light that even pain seems tempting. His expose of emotions is touching, suggestive of bittersweet. His sculptures are dedicated to “MANUSHI” And “NASOOR”, the imaginative themes. He has commissioned Murals in India and abroad, particularly Oman. His collections are exhibited Internationally, including National Gallery of Modern Art, New Delhi and Lalit Kala Akademi (National Academy of Art, New Delhi).

During Jamia Milia festival, in November,2016, his sculpture in marble showing a pregnant lady was displayed in the art gallery on campus. I was impressed by the details of expressions, even by the speaking natural cracks on the piece of stone aptly selected to be worked up on. I am taking the liberty of giving it a caption of ‘MANUSHI IN PAINS’.

Torso lived for many years in Japan, with my son, Aseem Mahajan, who once narrated to me a joke cracked by a custom official about it’s all in one organ.