Taking a break from the bedlam and super heated sauna that is Delhi these days, I have just returned from ten tranquil days spent in my cottage in a little village four kms. from Mashobra, beyond Shimla. It was a heart rending sight to have observed the massacre of thousands of trees and the dismembering of the hills on the Kalka-Solan stretch, where the on-going four laning work marks another victory of the internal combustion engine over plain common sense. And there’s worse to come – by this time next year the NHA would have started its assault on the Solan-Shimla stretch ! But thankfully the forests that lovingly enclose my village have not yet fallen prey to the various Mafias and demented ideas that have taken over Himachal these days.
Nature still rules here, and we co-exist comfortably, notwithstanding the “developers” and “builders” of Delhi who have started making inroads even here. Sometime back a hot shot lawyer from Punjab (who occupies a high office in that govt.) did try to install an illegal borewell in his new house which looks like the USS Enterprise of Star Trek fame. This would have tapped into the only water source that is the life line of seven villages, and depleted it. The villagers naturally protested, and the govt. predictably sent a police force from Mashobra thana to help the lawyer ! But the simple folks of Moolkoti did not give up: they blocked the drill machine and even threatened to burn it. The lawyer finally went back with his machine, his brief between his legs. Moolkoti has just learned an important lesson in real-politic: don’t depend on the govt. to protect the public interest – this has to be a DIY job.
Puranikoti – my village – gets no newspapers, and I did not activate my Tata Sky connection. I do not have a smart phone so social media has passed me by a long time ago. I rarely go into town because I can never find space to park my car, and in any case most of my contemporaries are at various stages of Alzheimers and do not recognize me (nor I them, and for the same reason). My erstwhile juniors do not visit me because I don’t write their ACRs anymore. So – as planned – I was all by my lonesome self. I could have been in the depths of the Amazon forests, as cut off from the outside world as Mr. Jaitley is from reality. It was sheer bliss! It was epiphanic. The reason ? I got no news of the outside world for ten full days ! 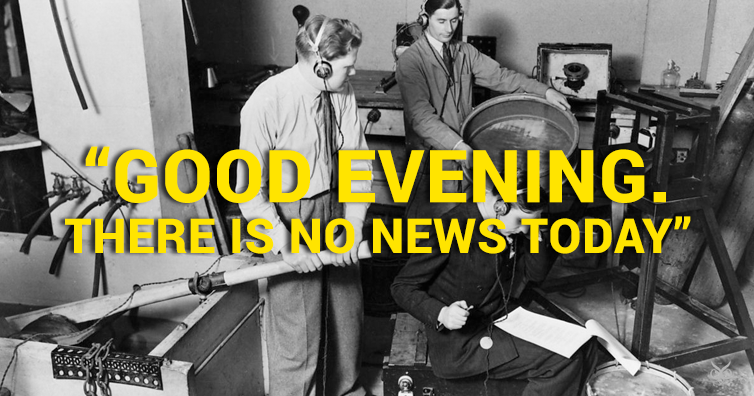 The daily news – and not just Arnab Goswami – is the biggest tyrant of the modern world, and its foot soldiers are the newspapers, television, social media, e-mails, forwards and the two million apps in the Google play store. “News” today has to be, by definition, something which is bad: destruction, corruption, violence, disease, sexual perversion, political venality, famine, war. Do you ever see anything else on TV or read about in the tabloids ? Journalism has become a scavenging beast which can survive only on carrion – give it something which is healthy and wholesome and it will starve to death. It promotes only a venomous mix of distrust, hatred, anger, discontent and adversarial emotions.
And so we are bombarded from morning till night, from womb to grave, by the worst aspects of human exertions and thought – godmen who rape, politicians who plunder, dictators who massacre, trains that derail, man-hole covers that disappear, builders who decamp with buyers’ hard earned moneys – I could go on and on with this Swindlers’ list, but I’ll only end up in tears of rage and frustration, and perhaps put you too, dear reader, in a similar frame of mind. Our daily fix of toxic “news” will never tell us about the farmer in Kerala who, fed up of waiting for the govt. to do something, finally dug a two acre pond with his own hands; or about the amazing experiment in the USA with parabiosis that has succeeded in slowing aging and mitigating Alzheimers; or about how the introduction of a pack of wolves into a national park in the USA has rejuvenated the ecology and geography of the whole landscape. News channels have given us all the gory details in the Ram Rahim saga, but did they spend even 60 seconds on the two brave women who struggled for 15 years to bring him to justice, or on the intrepid CBI officer who doggedly pursued his investigation inspite of being told to go slow ? But the purveyors of dismal news are not to be blamed alone, for we too have developed a taste for carrion, and find anything else stale and bland.
This was my epiphany. The bliss came from the fact that, deprived of this toxic diet for ten whole days, the world again became a beautiful place, sans distrust, anger and abuse. The mornings were bright and fresh since I had no means of knowing their SPM or C02 content. The labourer in the fields did not strike me as a potential rapist or bag snatcher. The shop keeper in Mashobra bazaar did not look like a GST evader. The queue outside the only ATM in Mashobra failed to evoke unpleasant memories of demonetisation. The cow next door did not remind me of gau rakshaks. Even Mr. Modi’s poster did not stir dreadful apprehensions of his next surgical strike!
The absence of “news” had, in a way, restored the balance of life: there will always be some rain along with the sunshine, but that is not reason to despair, to post an outraged tweet, to rush to a shrink or doctor or lawyer. Life is beautiful here in the tiny village of Puranikoti, playing out to the unhurried rhythms of hundreds of years past. It remains untouched by the venom of news anchors, the untramelled ambitions of Presidents and Prime Ministers. the materialism of a digitised world. It will survive this Plastocene Age too, if left alone. It will always be a refuge from the madding crowd. Hence the bliss.
I’m concluding this piece as my Shatabdi is pulling into New Delhi station (forty five minutes late, as usual). My next seat neighbour, who has spent the last four hours buried in his smart phone, informs me that Mr. Jaitley has just imposed a penalty on all bank accounts with a balance less than two thousand rupees. I am back in the world of the ” Breaking News!”