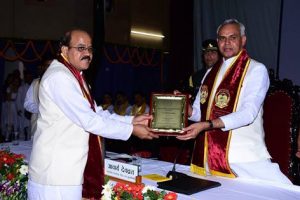 Dharamshala: Governor Acharya Devvrat presided over the 2017 annual convocation of Himachal Pradesh Agriculture University Palampur CSKHAPU today, where 343 students were given their degrees,90 certificates of honour and 22 were handed gold medals.

Governor Acharya Devvrat gave a Clarian call to the scientists to conduct extensive research on zero budget natural farming and develop new farm techniques to save the farm community. The Governor was speaking in the 14th Convocation of Chaudhary Sarwan Kumar Agriculture University, Palampur in Kangra district, today. He congratulated all the degree holder and Gold medalist students and urged them to serve the state and country in a selfless manner. He especially congratulated the girl students for excelling in different fields and expressed satisfaction that out of 343 degree holders 222 were girls.

The Governor said, “ India has remained agricultural country since the ancient times where there used to be cottage industries at village level which were sufficient enough to cater to basic needs of the people. But with the changing times, circumstances have changed and it is a matter of great concern that today farmers are committing suicide. The farming sector can be improved by adopting zero budgeting natural farming and evolving such system where farmers need not to take loans for agricultural activities.”

He said that natural farming was healthy and conducive for environment. He added that it was essential to shift from chemical farming to natural as the fertility of the soil declined and many health problems persisted due to chemicals used in abundance in agriculture crop, which was a matter of concern. He said that role of scientists was very significant for strengthening the agriculture sectors and urged them to work with sincerity and dedication as this sector was the backbone of the economy.

He said that if the scientists determined to work on natural farming than nobody could stop the state to become organic state of the country like Sikkim. It would also check the monopoly of private companies selling chemical fertilizers and pesticides.

Acharya Devvrat called upon the scientists of the University to educate the farming community about natural farming and added that special awareness should be generated for adopting zero-budgeting for improving the existing agriculture practices in the state. He also asked the scientists to conduct intensive research and develop new techniques besides improving the existing ones especially in organic farming. He said the research conducted in laboratories should reach the fields and farmers. He also stressed upon improving the indigenous cow breeds.
Earlier, the Governor planted a sapling of Michelin champc