The previous days storm had left a clear morning sky, just perfect for starting out an adventure expedition with a flush of adrenalin flowing through as dare devil sky divers jumped out of an air-force helicopter from 14,000 feet, in a flurry of  free-fall and colourful parachute canopy’s popping open in a thrill packed aero sport.

For Himachal, a state that abounds in adventure sports, it was for the first time that sky-diving as an adventure sport was conducted. In all 11 sky divers took the jump at the air show at Shimla airport on 12th June.

“Before every sky dive, the gut crunches just like it did when I first attempted it,” Squadron Leader Nisha Goverdhan described the excitement about the daring sport. Being the last sky-diver to fall out of the helicopter, a lot of cheering greeted Nisha as she landed on the airstrip.

“Being a girl from the hills here, seeing the beauty of Shimla, the white ranges of the greater Himalayas, the deep valleys and the overall geography around from that altitude has been a dream sky-diving experience for me,” Nisha, a veteran woman sky-diver captured the moment.

Sqd. Ldr. Nisha Goverdhan is from a village near Dharampur in Solan district of Himachal Pradesh and is a sky-diving instructor who has over 500 sky dives, a rare record for a woman sky-diver.

Corporal Balwan Singh from Bilaspur HP, a qualified rafting guide and Corporal Vishal Thakur from Bir, Kangra, a paraglider and para-motor pilot, were part of the 19 member Air Warriors team, better known as the ‘Air Devils’, which included two women, who participated in an adventure race that had sky-diving, mountain biking, para-sailing, trekking and river-rafting legs to complete in 6 days.

“In an adventure race an individual pits against himself and the unforgiving environment around for unique and compelling challenges,” Wing Commander SS Malik, leader from the Air Force team spelt out the essence of the sport.

Testing the limits of human endurance it was the first Adventure Tourism race, a multi-discipline adventure sport activity, in the state that Himachal Tourism, HPTDC conducted with the Indian Air Force from 12th to 17th June.

Pushing the thrill for adventure a notch higher, an adventure expedition is the closest experience possible to the gone by era of great global explorations, where you wander out into the wild, not knowing what you are up against next.

An adventure team includes men and women and the race should have at least 3 legs passing through diverse environs, cultures and weather conditions and are prepared to face hot, cold and wet conditions; to endure whatever is thrown at them.

At the Shimla airport show, an Air Devil effortlessly took flight in a motorized para-glider, manoeuvred about the airfield, demonstrating that a para-motoring flight can last for a few hours and cover much distance.

After the excitement of the air show Mr Dinesh Malhotra, Commissioner Tourism-cum-Managing Director said that the Joint Adventure Expedition with Indian Air Force was an exercise to showcase the vast adventure opportunities available in Himachal Pradesh.

As the morning wore off, the Warriors got into the grove for a demanding Mountain Biking race to Tatapani, a riverside destination on the bank of River Sutlej that is famous for therapeutic hot water sulphur spring baths.

Chief Secretary Mr VC Pharka flagged off the Mountain Bikers from The Ridge at Shimla. “The joint expedition was organized to motivate the younger generation for activity based tourism. There would be more such expeditions,” he said.

Mountain biking (MTB) is popular in the hills and many from Shimla MTB association joined the Air Devil bikers for a race to Naldehra, guiding them through the city traffic. The large troupe of geared MTB bikers had the regular traffic flow in fluter with many curious motorists stopping to watch and allowing the bikers to get by.

There was no time to tee-off for a putting round of golf at the scenic Naldehra Golf Course, which happens to be the oldest one in the country and was laid out by Lord Curzon, the British Czar of the early 1900’s.

The gravity assisted downhill ride from Naldehra to Tatapani, after a quick lunch at Golf Glade restaurant, was as exciting as the morning glide down in a parachute after having jumped off the helicopter. Reaching speeds of 50 to 60 kms/hr, the Air Force bikers sped over the tarmac, only stopping for taking selfies and group photographs.

A brief stopover at Tatapani turned up a surprise for the Devils. A sulphur spring hot bath at Sandhya Hot Spring hotel was something that none of the adventurers were expecting. The healing waters was something that rejuvenated tired and sweating bodies.

By the woods Hotel Mahmaleshwar in Chindi was a comfort earned for a early to bed night stay. At day-break, the panoramic views of wooded mountains and orchard country, had the expedition move by road through dense cedar, pine and oak forests of Karsog, Gohar, with a lunch stopover at Mandi, to Jogindernagar for the second night.

In the vicinity of Jogindernagar’s Hotel Uhl is the world famous paragliding site of Bir-Billing. Up early, the devils were ready for the days adventure. As the sun rose over the valley, stirring the air-currents, the conditions were ideal for paraglider pilots to take off from Billing.

Running down an hill slope with enough speed to inflate a stringed paraglider to the end of a cliff or a precipice and safely get airborne can test your nerves. Having run off the hill and float into the sky, the ride down in the glider is an experience you will never forget.

The entire team, including Sqd Ldr Nisha Goverdhan, Flight Lieutenant Manya Sharma, the two women members of the team and others were soon flying. The morning Bir-Billing sky was soon dotted with colourful canopy’s. The leg was flagged off by Mr CP Verma, Deputy Commissioner of Kangra.

By lunch it was pack up time and the expedition continued by road for a night stay at Manali. On day 4 of the expedition, the devils were ready early for a punishing two day trek to Beas Kund (3700 meters altitude) in Solang Valley. The trekking expedition flagged of by Captain Randhi Salhuria, Director of Atal Bihari Vajpayee Institute of Mountaineering and Allied Sports.

Three hours into the moderate climb had the trekkers walk into base camp at Bakr Thatch. The walkers were prepared for the steeper and harder part of the trek but an afternoon shower around the camp site and snow on the peaks nipped the temperatures low enough to draw out woollens and jackets. The ascent to Beas Kund was changed from an afternoon trek to a morning one for the next day.

By evening the sky cleared up. A game of volleyball with random players from among participants undergoing a basic training course in mountaineering Bakr Thatch camp was a lively contest. The dinner was over before it got dark. Devoid of all light pollution as there is no electricity supply at the camp, gazing into the night sky from the tents was like being one among the stars.

Walking over some very tough rocky terrain and large glacier moraine boulders, the hardened trekkers reached Beas Kund before noon on the 6th day of the expedition. As if the two hour steep climb was not enough, some wanted more out of the adventure. Led by Wing Commander SS Malik, Leading Air Craftsman Anurag Jhakar, Junior Warrant Officer ML Yadav and Flight Lieutenant SB Santosh, who was also the team doctor, took to rock climbing at Beas Kund.

The journey down from Beas Kund, the birthplace of the mighty Himalayan river, was a relaxed one.

The trekkers descended at a leisurely pace, taking more breaks on their way down than they did so on their way up as if they were unwilling to leave the serene and picturesque valley.  The night stay at Hotel Manalsu in Manali was a comfortable one. The tired bodies went to bed early and slept like logs.

From air to land adventures, the last leg was about water. White water river rafting in Beas River, on a sunny day, with the rapids splashing in your face and drenching you was an exciting thrill. On the last day of the expedition Mr Gopal Krishan Mahant, a director on HPTDC board, flagged of the river rafting adventure from Pirdi, near Kullu.

Not just sky-divers, the Air Devils had scuba divers and good swimmers in the team. Where the glacial river flow got gentle, the devils abandoned the raft for a swim and boarded it back where a rapid needed to be negotiated. The expedition ended at Jhiri, the finishing point of the river rafting leg.

In the evening, Forest Minister Thakur Singh Bharmouri presided over a function where the Indian Air Force team was commended and given certificates for having successfully completed the multi-disciplinary 6 day adventure expedition.

At the conclusion of the function Rupesh Kanwar, a director on HPTDC board summed it up as, “the expedition was a conscious effort to connect adventure tourism with the hotel industry and exhibit the vast potential that this exciting activity holds.” 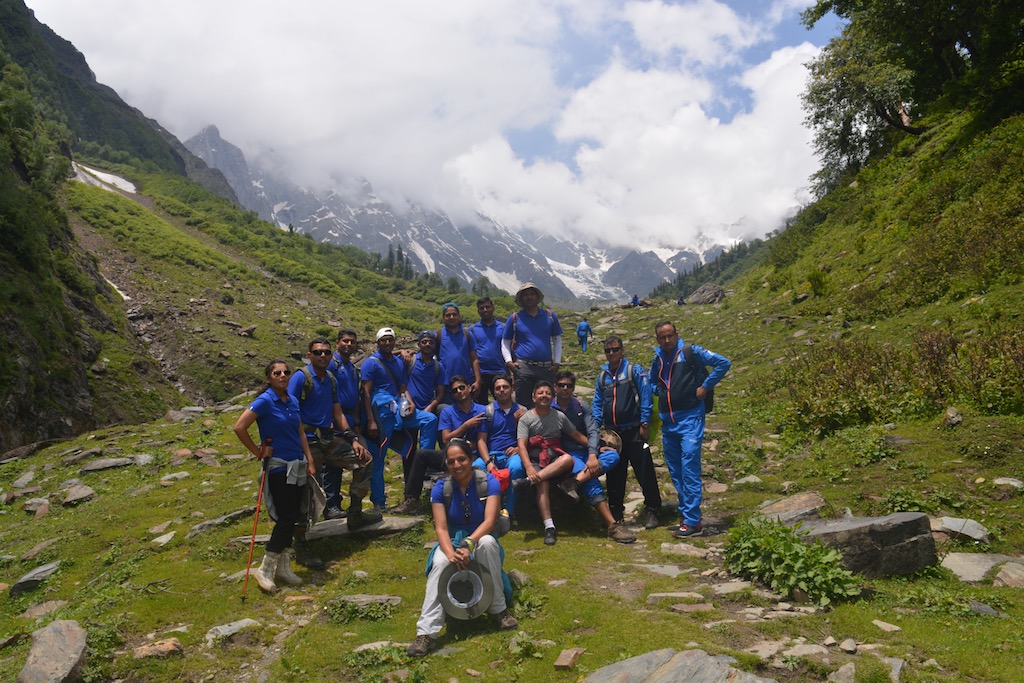