Manali: The maintenance of the bridge on the Beas River connecting the Manali town and national highway to Leh has been neglected badly by the authorities. The steel sheet laid on it has developed cracks at serval places and many of the sheets are even lying loose on the top. One can see the river underneath through those missing sheets.

According to the experts, all the important river bridges are classified according to their span and load factor, which is basic for all state and national highway according to the Indian Road Congress(IRC) standards. Any junior Engineer with some experience would dub this bridge as ‘unsafe’. 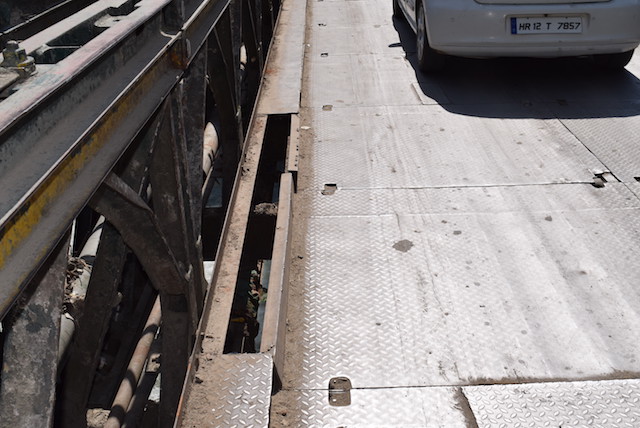 Adding to the apathy, entrance of this bridge is a narrow curve and most of the time buses and trolleys are seen struck in between, leading to hours long traffic jams. Significantly, not only does this bridge connect Ladakh and Lahaul – Spiti but it is also a link to the most popular tourist spot – the Manali Rohtang pass. Moreover many locals crosse this bridge on foot regularly, going about their day to day activities. The bridge is equally important for villagers of left bank of Manali and also some prominent establishments on left bank. It is also very important from the point of view of Army supply and tourism.

It has been long pending demand of the valley people to have a new, broader bridge constructed nearby to facilitate a smooth flow of the life and traffic. Even Chief Minister Virbhadra Singh had announced, at the opening of winter carnival earlier in the year here,  that soon a new bridge would be constructed on Beas River but nothing more than the announcement has moved.

Hundreds of children, headed to school, cross this Manali bridge on foot. Last year, in summer one child slipped through the missing metal sheets of the bridge and fell into River Beas.

When connected Pawan Rana, the sub-divisional officer (engineering) of Public Works Department (PWD) disclosed that the bridge was under the jurisdiction of National Highway authorities come under national highway

On being pointed out to the concerned Executive Engineer (XEN) of National Highways, he said that currently repair work at the Bhuntar Bridge in Kullu was being carried out and once that is done, work on repairing the Manali bridge would be taken up.