Are we becoming an Animal Farm ?

Most folks would recollect that a few years back Dr. Manmohan Singh, while addressing a gaggle of industrialists, had bemoaned the fact that India lacked entrepreneurship, and that what it needed was an infusion of the “animal spirit.” Well, he must be a happy man now, because our polity is now flooded with animals-fish, fowl and mammals-like never before. Anyone scanning the morning paper could be excused for thinking that we are more a menagerie than a nation. Never have animals dominated the national discourse as they do today.

It all started, you will remember, with the Supreme Court dubbing the CBI as a caged parrot. This did surprise some of us better travelled lot, because to us the CBI resembles more the trained falcon, cowper and all, on the wrist of its master rather than the parrot, which is known to have a mind ( and vocabulary) of its own. But the SC was proved right, perhaps in a manner not intended by it. The last two Directors of the CBI are now being investigated for wrong doings and may soon become “caged parrots” in Tihar. Maybe the Court knew a thing or two we didn’t ?

Barely had the parrots taken to the skies when the buffalo appeared. One fine morning the sturdy buffaloes of Mr. Azam Khan, one of the then 3.5 Chief Ministers of UP, decided to take a walk and disappeared. This resulted in the greatest mobilisation of the uniformed forces since Kargil and the national media was agog with theories: had they defected to the BSP ? Had they become Tundey Kabab in Lucknow ? Was this a case of kidnapping or simple police napping ? Fortunately the bovines returned on their own (this was before the hey days of ” ghar wapasi”) in a couple of days, Azam Khan took a deep puff of his chillum, and the UP police went back to their daily ritual of extorting money and locking up innocent folks.

Soon after, a lady in Madhya Pradesh complained to the police that a parrot in her neighbourhood had outraged her modesty by passing lewd remarks at her. Bound by an earlier Supreme Court order that the police just HAVE TO register an FIR if a complaint is made to them, the police (who, as we all know, are scrupulously law abiding) immediately arrested the parrot and took it to the police station for interrogation. This particular avian, however, apparently was better versed in the laws than most lawyers in UP: it insisted on the right to be silent, and gave nothing away. No cuss words. No four letter words. It simply whistled- a gender neutral whistle. By the evening the police had to release the bird for want of evidence.

Something similar happened with the black Labrador dog of Mr. Somnath Bharti, the AAP Minister in Delhi, a few months later. His wife (Bharti’s, not the dog’s) alleged that the dog had bitten her on the former’s explicit command. Attended by a thousand TV cameras, both the dog and Bharti were taken to the police station where he (the dog, not Bharti) was repeatedly ordered to bite the junior most constable there. Now, as all of us who have had the privilege of consorting with Labradors know, this breed is incapable of biting; they just love everybody, even policemen, and so this particular specimen simply kept wagging its tail. The cops finally concluded that the dog was innocent and that it was more likely that the wife had been bitten by Bharti. But since the denture marks did not match, they also had to let the Minister go. The Lieutenant Governor was not happy at this instance of the tail wagging the dog, since his instructions were to put Bharti in the dog-house, but it all ended up with the dog in the Bharti-house !

Next came the unfortunate episode about that poor police stallion, Shaktiman, in Dehra Doon. This noble beast was battered by a BJP troglodyte MLA and ultimately died. As expected, no action was taken against the real beast, the MLA, and the discourse shifted to the question: should horses be used by the police to control crowds in a democratic country ? Never mind that we routinely kill a few thousand every year in police actions. But the real answer to this question had been provided by Mrs. Gandhi many years ago, when a bunch of IAS probationers complained to her that horse riding should not be a compulsory activity in the Academy at Mussoorie. Mrs. Gandhi famously refused with the words: “If you can’t control a horse, how will you control a crowd ?” Maybe the Lok Sabha Speaker should be imparted a few lessons in horse riding ? 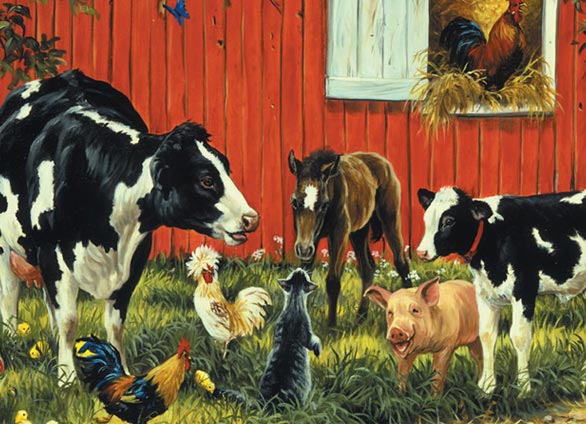 Enter the bull. Till a few years ago the perceived wisdom was that the good burghers of Tamil Nadu worshiped only three things in life: Jayalalitha, lotteries and film stars. Jallikattu proved us all wrong. The depth of passion displayed by the state for the Bull for more than a month had us all riveted to our idiot boxes and almost resulted in a constitutional crisis. This bull in the china(mma) shop has finally established itself as the Holy Cow in Tamil Nadu.

The rhesus monkeys of Shimla then made a brief appearance in the headlines. They’ve been there since the times of Kipling but now out-number the tourists from Karol Bagh and Kotkapura. It is reported that they’ve even started attending Cabinet meetings!Though the state govt. has denied this canard, some recent decisions of the Cabinet (like granting unemployment allowance when there is no money for salaries) do indicate a simian footprint. There was an outrage when the apes were declared vermin but I’m sure there’s no real cause for concern: very soon, the Gau Rakshaks will float a subsidiary- perhaps the Vannar Sena- to protect them and thereafter the monkeys can continue to contribute to policy decisions in this idyllic state.

The UP elections saw the humble, inoffensive donkey emerge on the national stage, being equated with Gujarat politicians by Akhilesh Yadav. Apart from the fact that the donkeys had every right to take umbrage at being compared to politicians, Mr. Yadav was zoologically incorrect too: what he called donkeys are actually wild asses of the Rann of Kutch- a distinct and endangered breed, which hopefully will continue to survive without the help of our politicians or Amitabh Bacchan. But the reference to them did elevate our political discourse to new levels.

There is one animal, however, which completely overshadows all others in this circus: the Cow. It has become the symbol of nationalism, Hinduism, Hindutva, patriotism, tradition and Indian-ness. Ironically, this docile, compassionate animal has somehow also become the cause of much violence in its name ! Parliament has spent more time debating the cow than the GST, the Budget or Kashmir. It has won BJP the UP elections, and we are all now waiting with bated breath to find out whether UP will now be cast in the image of Mr. Modi, Yogi Adityanath or the Cow.

So, as you can see, animal spirits are in full flow in digital India. The only quadruped missing from this list so far is the pig, but perhaps that’s because they are so much like us. Churchill was quick to figure this out when he said: “I like pigs. Dogs look up to us. Cats look down on us. Pigs treat us as equals.”

Are we becoming an Animal Farm ? The Gaikwad episode would certainly indicate so, in more ways than one.