‘Who will stop the Modi Juggernaut?’

This seems to be the hot topic for discussion today within all opposition parties. There is a visible sense of resignation among most opposition political leaders. BJP’s success in Uttar Pradesh (UP) has left them stunned and most are at sea today as far as their future course of action is concerned. The last straw that seems to give them some hope is to form a ‘maha gathbandhan’ of all opposition parties with the hope of presenting a united front against BJP for 2019 general elections. Given the individual aspirations of various regional satraps from Mulayam Singh Yadav to Mamata Banerjee to Nitish Kumar and the maverick in town in the form of Arvind Kejriwal, formation of a ‘maha gathbandhan’ does appear to be a distant dream. All these parties suffer from lack of a National footprint apart from not having a leader who has a recall across the nation.

The name of Rahul Gandhi is missing from the above list as today no meaningful regional party will accept his leadership role in any coalition after Congress’ poor showing in most elections of late barring Punjab. The fact that Congress fails to introspect and do what is right for the party instead of pushing political sycophancy to the extreme by continuing to prop Rahul Gandhi is something that defies logic. The reforms that Rahul Gandhi has been talking of for years are still to take off despite most Congress stalwarts paying effusive lip service to his grand re-organisational plans. To any neutral observer it does appear that none of the leaders, including Rahul Gandhi, have any intention of initiating genuine structural changes within the Congress since such an exercise will always be harmful to their personal positions and interests. Larger interests of the party in the long run are certainly not on top of anyone’s list. Leaders like Mani Shankar Aiyar, Anand Sharma, Kapil Sibal, Salman Khurshid, Chidambaram and others of their ilk are far from being genuine grass root leaders. All of them thrive on goodwill of Gandhi family and therefore want Rahul Gandhi at the helm. The only real grass root leaders available with Congress are Kamal Nath, who holds the record for being a Member of Parliament nine times consecutively, followed by Sachin Pilot and Jyotirao Scindia. Leaders like Mallikarjun Khadge are not in the reckoning at all and only Sonia Gandhi can explain why he was made leader of Congress party in the Parliament in 2014 over Kamal Nath whose credentials were many times stronger. Did Sonia Gandhi sideline these three leaders to avoid any competition to Rahul who was being groomed for the position of Party President? How can a party with such character that places Gandhi family above everything ever hope to rise from the nadir that it has touched and become a party of substance at national level in the near future?

Congress leaders like Aiyar have come out strongly in support of a ‘maha gathbandhan’ and even stated in no uncertain terms that they realise and understand that Congress may not get the leadership position. They still bat for such a move because internally they have run out of ideas and steam to match the political astuteness of Mr Modi and BJP President Mr Shah. The fact that most of their leaders can hardly boast of any contact with the voter at grass root level adds to their woes. By seeking to form a universal alliance against BJP, Congress possibly hopes to remain relevant or at least delay its total demise by a few years. The chances of its becoming a viable alternative at the national level to a resurgent BJP in the short span of next two years look very bleak indeed. The only thing in favour of Congress is the fact that past history shows that Indian voter can be highly unpredictable. The rout of Smajwadi Party (SP) in UP in recent state elections is an example of the same. Congress’ rout in 2014 national elections and booting out of CPI (M) in West Bengal are other examples of what the Indian voter can do.  However as things stand today, it is highly unlikely that something like this may happen in 2019 to BJP.

No one can deny that today there is a well meaning feeling of pride and higher self esteem in majority Hindu population across the country. It may not be wrong to say that possibly after the freedom struggle in 1947, the last two years may be the only time that the majority community is on a high barring the short spurts during 1965 and 1971 Indo-Pak wars. For a change the word Hindu is now being spoken with pride and without fear. Minority appeasing political parties like Congress would like to term it as rise of Hindu Nationalism and some pseudo social activists may even call it the rise of Hindutwa. Unfortunately the term secular has been so twisted over the last few decades that any mention of the word Hindu was enough to brand one as an extreme Hindu rightist or a minority hater or intolerant. This environment was created by design over the last six decades by successive governments who thrived on minority appeasement to create vote banks at the cost of majority population in the country. It may not be wrong to say that the nearly 83% Hindu population hardly had any voice in a country run by successive governments with a fixation for minority appeasement. Indian media too is equally guilty of never having given enough space and exposure to what Hindu or Hinduism stands for since it wanted to be on the right side of those in power for obvious reasons. 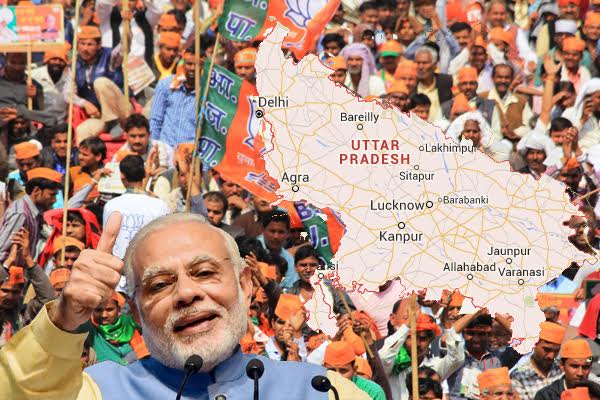 The country never had a government that worked for all its citizens without bias of religion or caste. The continuance of reservation policies even after nearly seventy years of independence in government jobs, educational institutions and other areas is a testimony to this erroneous approach. It was totally against the spirit under which such reservation policies were formulated in the first place for a restricted period of ten years. The continuance of these policies for so many decades only highlights the inefficiencies and failures of the governments who could never meet the development needs of the nation. The root cause of this state of affairs was the total lack of focus on the real India that lives in rural and semi rural areas across the nation. The guiding principle for those in power was that if the masses were kept poor and uneducated, they could always be fooled to give votes on either false promises or use of muscle power. This approach also helped to promote dynastic politics and encouraged criminality in politics which gave rise to leaders of dubious quality whose selfish interests prevailed over national interests.

Today we have a government and leader who are keen to address the basic needs of the common man while pursuing the larger aim of taking India on an accelerated growth path. Schemes or Sarkariniti like ‘Swachh Bharat’, ‘Ujjwala’ and ‘Jana Dhan Yojana’ are all aimed at the common man that will go a long way in improving the overall quality of his life. Opposition parties are quick to point out that they too had come out with similar schemes from time to time in the past. However they forget that most such initiatives just remained as part of their false promise portfolios and never really touched the life of the masses in a meaningful way. On the contrary the present government has succeeded and achieved more in two years what the past governments could not do in five decades.

Mr Modi is an extremely accomplished orator who has a great connect with the audience. No other contemporary political leader in the country even comes close to him. He does not shy away from giving retorts to his opponents when required but invariably does it with humour and a finesse that others lack. This pleases the crowds to no end. His sincerity towards the nation and its people reflects in his deeds, his words and above all in his body language. Unfortunately when you see most others leaders this positivity is either missing or very nominal. Hardly any political leader in the history of independent India has a cleaner image than Mr Modi as far as corruption is concerned. The authoritarian style of functioning, questioned by many of his detractors, is actually seen as a strong attribute by the common man in Mr Modi. Mr Modi has touched millions of Indians with his grass root level schemes that ensure their inclusion in the development process. Many may not realise this but schemes like Aadhar Card, Jana Dhana and MUDRA Yojana also provide a unique identity (and dignity) to an otherwise obscure individual who till now hardly counted since he was just part of a huge mass of humanity. Last but not the least he has a vision for the nation that he is not afraid to spell out again and again so that it also becomes the vision of 1.3 billion Indians.

Given the above attributes, is it any wonder that the opposition feels stonewalled with no clue on how to stop this Modi Juggernaut? The opposition does not seem to realise that more often than not, when they oppose or denounce Mr Modi or his government, they are actually making him stronger. Opposition for the sake of opposition is certainly counterproductive. The need of the hour is not to oppose Mr Modi or his government in whatever they do or stand for but to play a more constructive role to remain meaningful. This is a tall order for which there are hardly any takers in the opposition benches today. It is imperative that a new leadership emerges from within the opposition ranks that is charismatic, sincere, honest and capable of beating Mr Modi at his own game. Such leadership will have to rewrite a script that appeals to the nation as a whole, just as Mr Modi did in the run up to elections in 2013-14. The opposition may be better off if they take time to regroup, rethink and re-strategise and take their chances in 2024.  Politics and politicians will come and go and so will Mr Modi and his era. But as of now he is here to stay and The Modi Juggernaut will be unstoppable in 2019.