The India of today is a historical consequence of bribes

We appear to be going through an intense and populist phase of cultural revival these days and this is therefore as good a time as any to put on record my opposition to the efforts by Mr. Modi and his team to eradicate the system of bribes in our two thousand year old country. I see this as an assault on our glorious past and a move that seriously jeopardises our GDP growth rates.

Bribes have been an integral sub-set of our hoary culture for hundreds of years, a practice which is respected and admired. It has been an indispensable part of  religion. Ours is a transactional religion where we give in order to receive. We regularly bribe our Gods to grant us things – a child, a house, a job, even a contract- which we usually don’t deserve either on merit or on sperm count. Our temples are overflowing with gold and cash: Tirumala reportedly has an annual income that exceeds that of even the Vatican. During the recent demonetisation exercise even the government had to turn to these temples to tide them over the cash flow problem. The govt. wants their hoards of gold to buttress the country’s bullion reserves.All this wealth is essentially a pay-off to the Gods. Indians are the least philanthropic of races, but we will even borrow money to “donate” to our temples, for a consideration, of course.

It would therefore be unrealistic to expect that this urge would be confined only to places of worship, and not be reflected in our daily lives. We accept corruption as a way of life and nothing proves this better than the fact that we keep on electing and re-electing corrupt politicians to office every five years. No stigma ever attaches to them, we treat them as – you guessed it – demi-Gods who are entitled to all the lucre they can gather.

The India of today is a historical consequence of bribes. It was not the Mughal armies that captured our fair country but the strategic distribution of bribes on a colossal scale. The Marathas and Rajputs were vanquished by paying off assorted generals and gate keepers, enabling the Mughal armies to easily capture the great forts of Golconda, Parli, Wardhangarh, Nandgir, Chandan, Allahabad, to name just a few. Dara Shikoh’s son was betrayed (and killed) for a bribe, thus ensuring that Aurangzeb could cement his rule. Even the British conquest of India was facilitated by Robert Clive’s bribing Mir Jaffar at Plassey: it took just 3000 British troops and a lot of money to deliver India to the British crown. 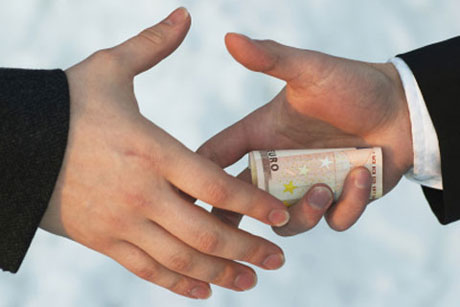 Our ancestors (peace be upon them) had made bribery a fine art: they recognised that, like all fine art forms, it possessed subtle nuances and therefore categorised them into different types based on occasion and purpose: the nazrana, the shukrana, the mehentana and so on. Some were for specific favours, some for creating generic goodwill, others intended to simply establish the lofty status of the giver. But back then negotiations were conducted with savoir faire and refinement, over a game of chess, ” banarsi paan” being served en passant, with even a gyrating tawaif being thrown in for good measure. None of today’s vulgarity of Samsonite suitcases, dark  and smoke filled back rooms, or initials in a diary. This is what happens when an art is converted into a science. There is a legend in my family of an ancestor who was organising his daughter’s wedding in his mansion when he received news that a gang of dacoits was planning to plunder his house at the same precise time as the wedding. This would have been an intolerable loss of face for the zamindar in front of all his guests. So said forefather summoned the gang leader and offered him a sum of money he could not refuse in return for not raiding his house. All amicably settled with a bribe, and this is the crux of our ancient tradition of bribery: it was not about the money alone, but about status and recognition of one’s respective position in society. For them, bribery was like the quality of mercy described so well by Shakespeare: it is not strained, it is twice blessed for it blesses both the giver and the taker !

Economists, those purveyors of the dismal science who can never agree on anything, typically disagree on this subject too. One group (the Harvard lot) claim that bribes knock about 2% off our GDP. The others (the Hard Work lot) differ- they are of the view that bribes add to productivity and national wealth. I tend to agree with the latter.  Corruption makes bureaucracies more efficient. Given the lethargy of our govt. machinery and the thicket of laws and regulations that enmesh us, absolutely nothing would get done in this country without pay-offs: no roads or bridges, no passports or driving licences, no industry or trade, no public transport or bank loans, no export or import, no govt. jobs or old age pensions. If we are growing at 7.1% or 7.5% or whatever mythical figure the govt. would like us to believe, it is because of the bribes that grease the wheels of development. Just look at the latest empirical data– the moment govt. clamped down on black money (the accumulated stock of bribes and wealth generated by bribes) by way of demonetisation our growth rate has fallen, the economy has slowed down and unemployment has shot up ! I believe things will improve by the second quarter of 2017, once the bribes start flowing again. Its not love which makes the world- or, to be more accurate, India- go around: its black money and bribes. This constitutes 15%-20% of our GDP but is the catalyst which generates the other 85%. Now that Mr. Jaitley has no doubt realised this by seeing that more money has been deposited in banks than what was demonetised by him, he will perhaps now abandon his attempts to demolish this central pillar of our history and culture. He should just consider it as another Service Tax , a more efficient one, for when we pay a bribe we get what we expect whereas when we shell out Mr. Jaitley’s service tax we rarely do.

So perhaps we need a mass movement to preserve this sapient part of our culture, to protect it from modern freakonomics, to save it from a Western paradigm whose biggest cultural achievement to date is the  MacNugget. After all, if we can fight to retain Jallikatu, Santhara, Dowry, Female foeticide  and Triple Talaq as  cultural legacies, why not the fine art of Bribery ? !